Geologically speaking, Hawaii is one of the most fascinating places in the world. It is living, breathing, and changing every day. The Big Island’s land area has grown after the recent eruption in 2018.  I wanted to see the fiery landscape for myself, so we caught a flight to the Big Island. It helps that there are often cheap airfares between Alaska and Hawaii.

We took our big adventure to Hawaii Volcanoes National Park that encompasses two of the world’s most active volcanoes – Kilauea and Mauna Loa. In Hawaiian religion and legend, Pele is the goddess of volcanoes and fire and the creator of the Hawaiian Islands. Hawaiians also believe that Kilauea is a place for the family of fire gods, and Pele governs Kilauea and is controlling its lava flows. Her home is Halema’uma’u, at the summit of Kilauea. She is both destructive and creative.

From the moment we entered the park, I could feel the power of the land. We drove by freshly hardened lava fields that covered roads and forests. Just a 4.5-hour direct flight and a few hours drive, I was in the middle of this strange land made by volcanoes. For three days we explored different parts of the park. Some of the areas were closed due to the May 2018 eruption. No active lava flow was visible when we were there but some areas were damaged by the explosion.

Here are some of the highlights that you should visit in Hawaii Volcanoes National Park.

I always make a point to stop into the National Park visitor centers in the US. They are full of great information, friendly park rangers, and often have interesting souvenirs. If you collect the national park stamps (like me!), this is the place to start your adventure.

Kīlauea Visitor Center is not an exception. They had informative movies about the park and I liked the one about Halema’uma’u. The park rangers gave us some good ideas for day hikes and places to visit. It’s a big park and would be difficult to visit every landmark on the map, so it was helpful to chat with them to narrow down our to-do list.

This is where the goddess Pele resides. It is one of the most active volcanic vents in the park. As recently as May 2018, the active lava flow was visible and the crater eventually collapsed and created a much larger crater. One of the movies at the National Park Visitor Center highlights activities of Halema’uma’u. The crater is visible from many lookouts but make sure to check out the view behind Volcano House. The hotel’s balcony is usually filled with visitors enjoying the views of the volcano. We could see the steam coming out of Halema’uma’u and the majestic lava lake and crater. 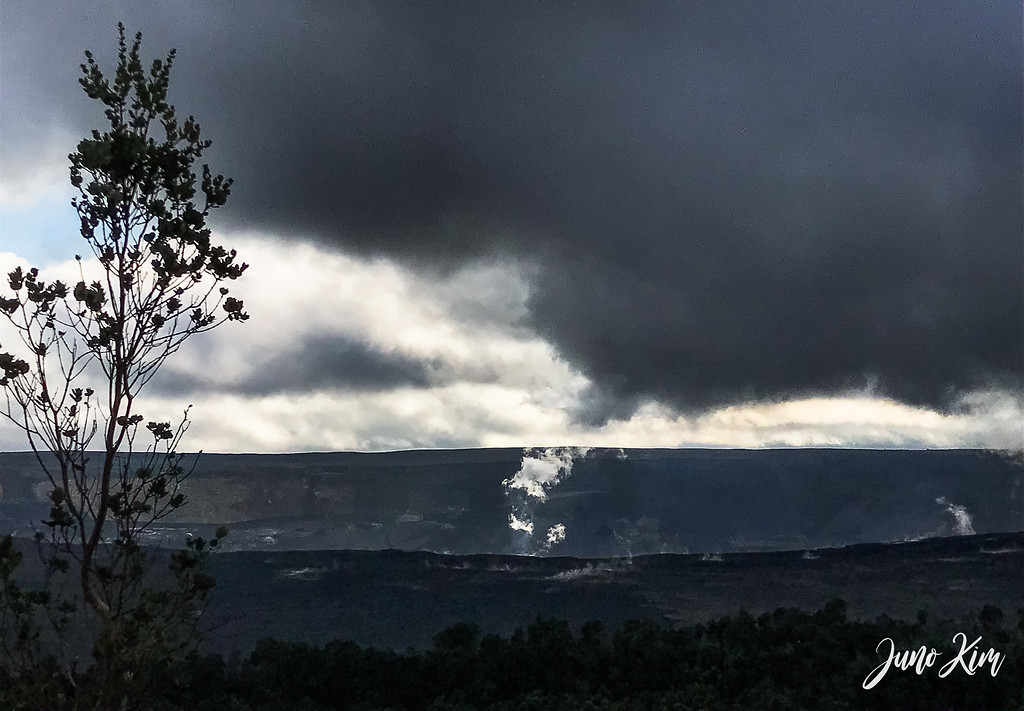 Nearby the Visitor Center, many steam vents are visible. Groundwater seeps down to the hot volcanic rocks and returns as steam. 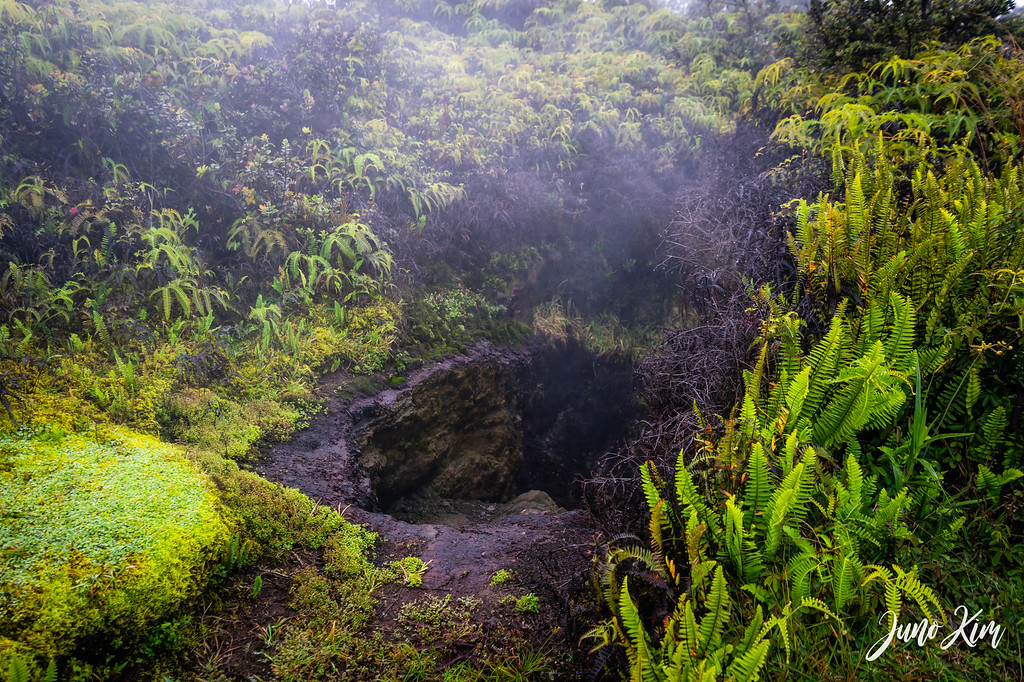 If you want to feel what it’s like to walk on an active volcanic crater, check out Kilauea Iki Trail, which you can access from Stop 3: Kilauea Ili Overlook, 5: Puʻu Puaʻi Overlook, or Stop 6 Devastation Trail.  Just follow Ahu (stacked rocks) that mark the trail across the crater floor. 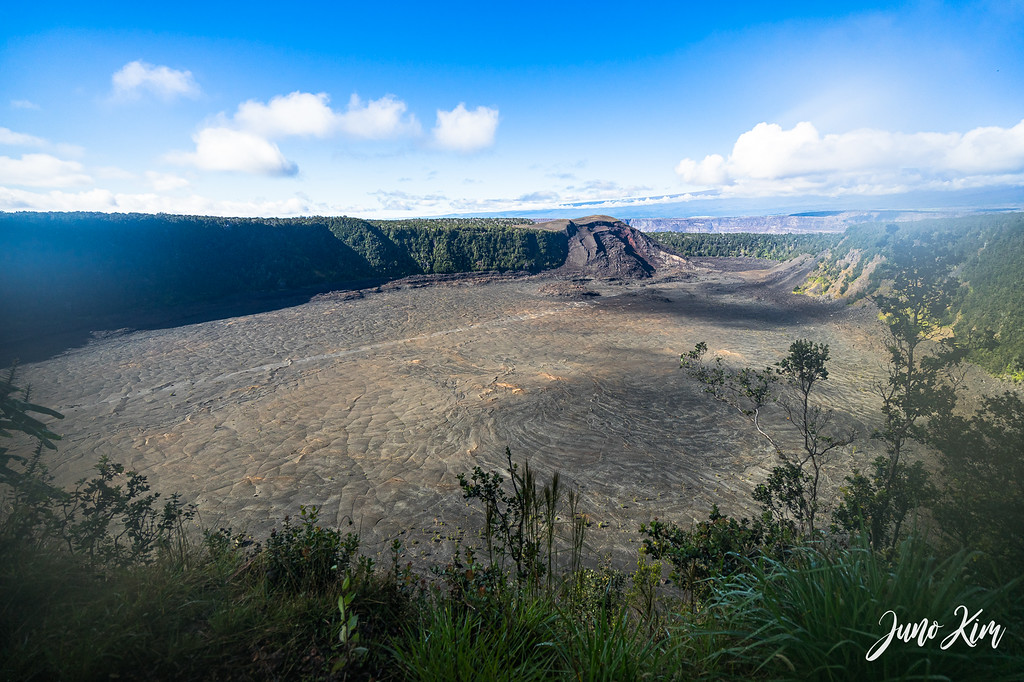 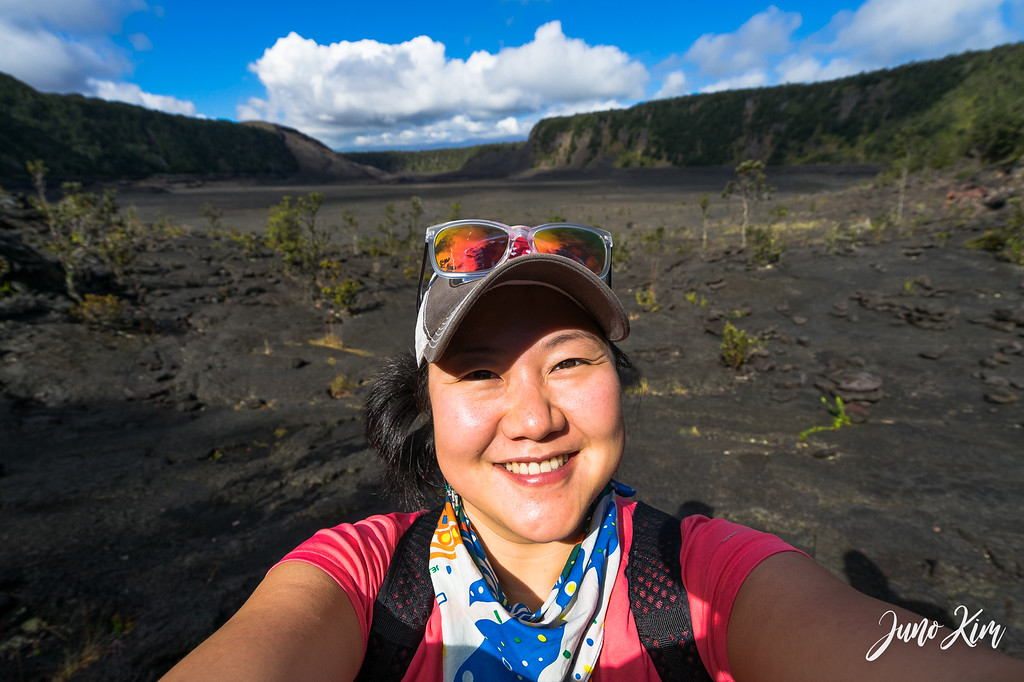 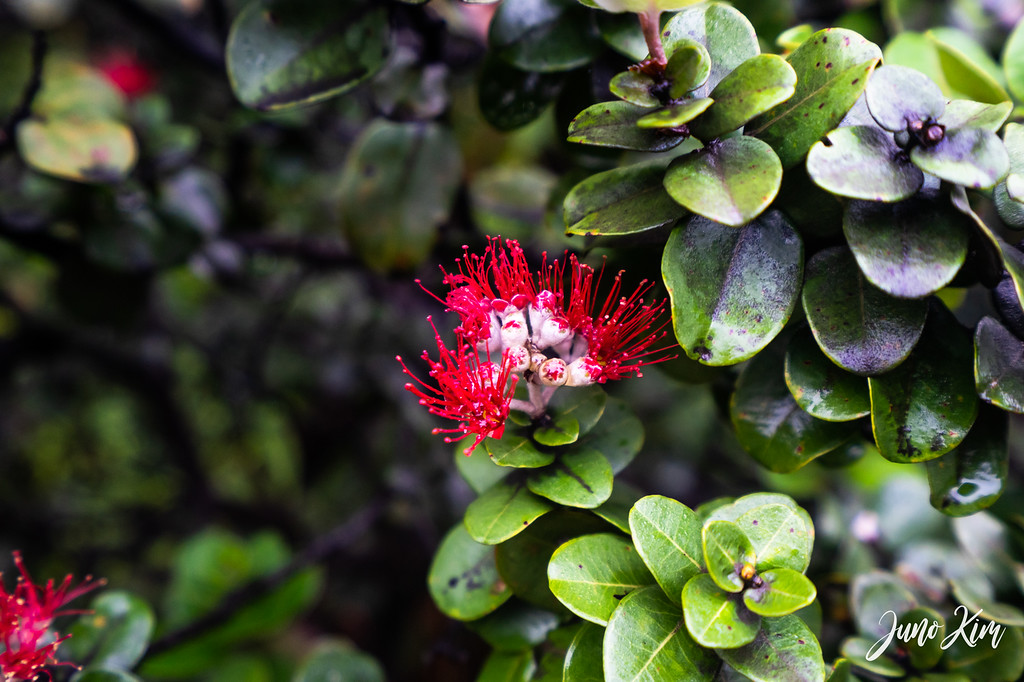 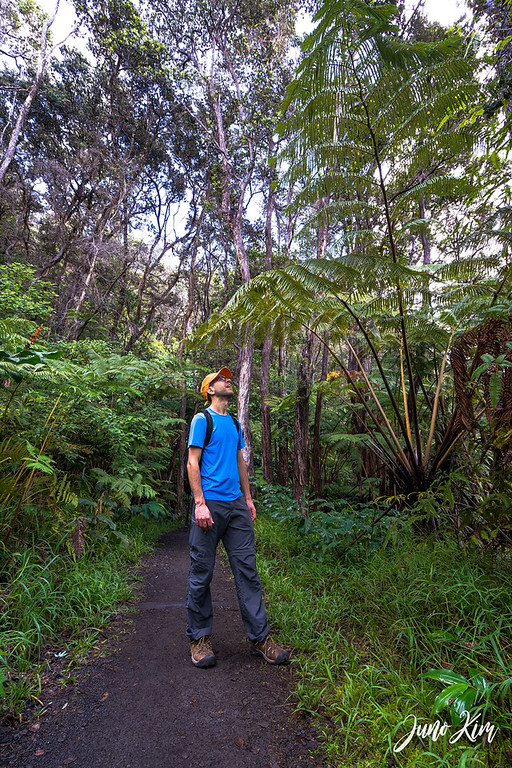 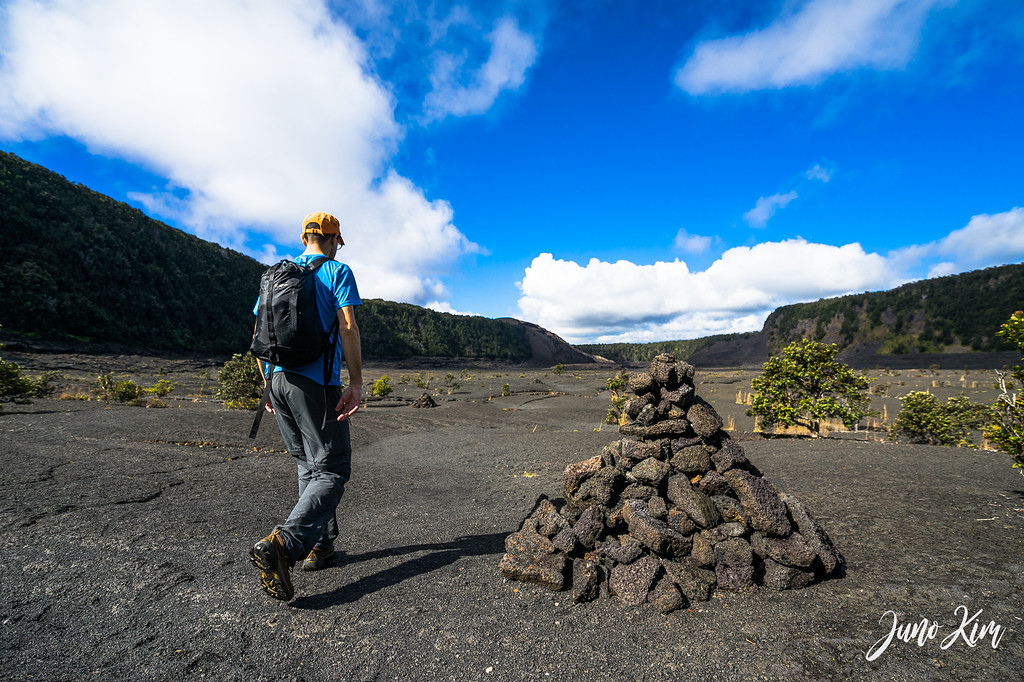 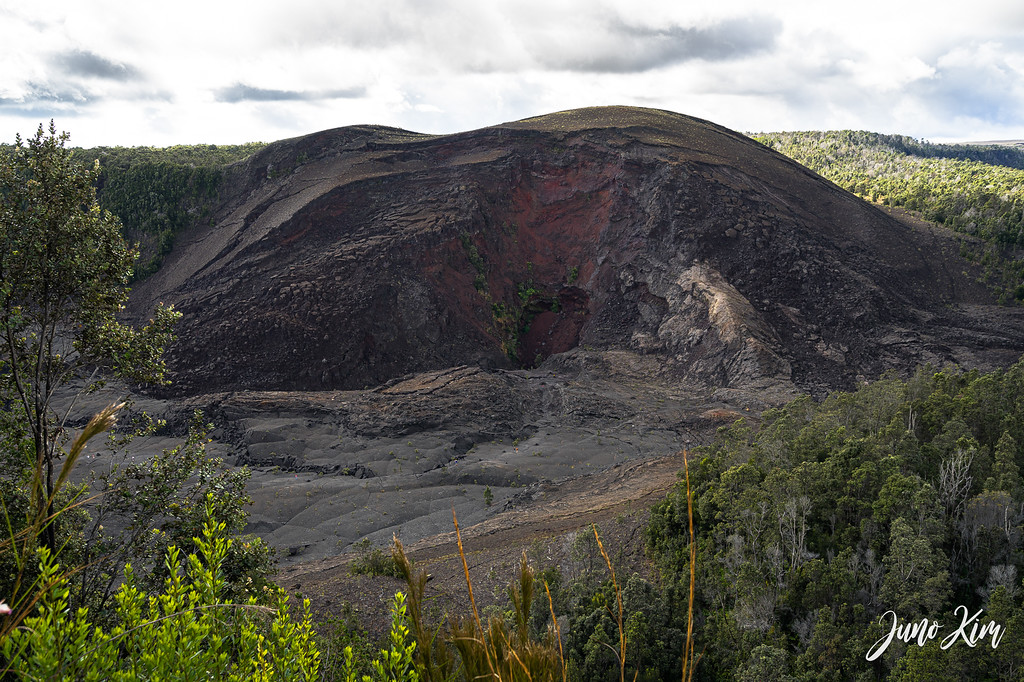 As the name suggests, this road crosses many craters and lava fields. It was eerie to see the black lava flow over green fields. In fact, it took me a while to realize that it was a series of lava flows that I was seeing. If you see something for the first time, the brain takes a while to process for sure. On this drive, make sure to stop at Kealakomo for a picnic. This place has a superior view of the coastline, lava flows, and an almost 360-degree view of the surrounding area. 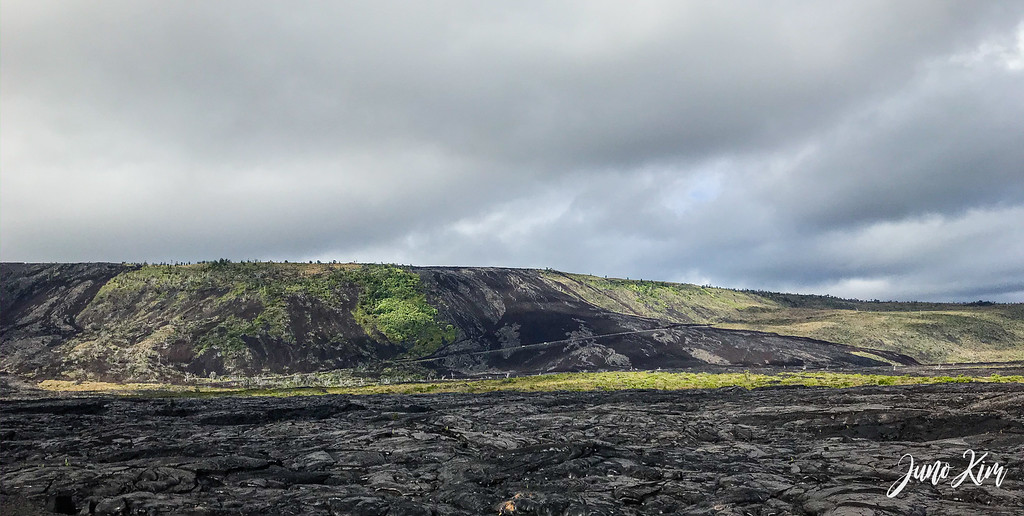 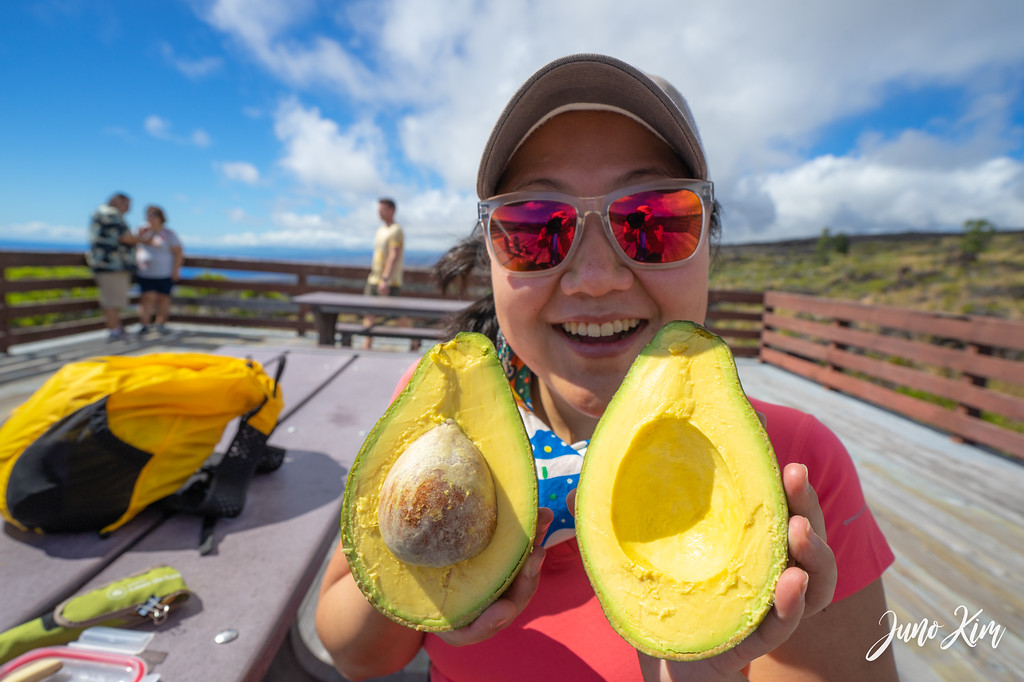 Petroglyphs in the middle of lava fields? I didn’t expect it. Pu’u Loa Petroglyphs is at the Stop 7 of Chain of Craters Road. This place has more than 23,000 petroglyph images including geometric motifs, human images, animals, and other cryptic designs. The raised boardwalk around the site is a great place for a day hike. Pu’u Loa, translated to “long hill”, is considered a sacred area for the people of Hawaii. 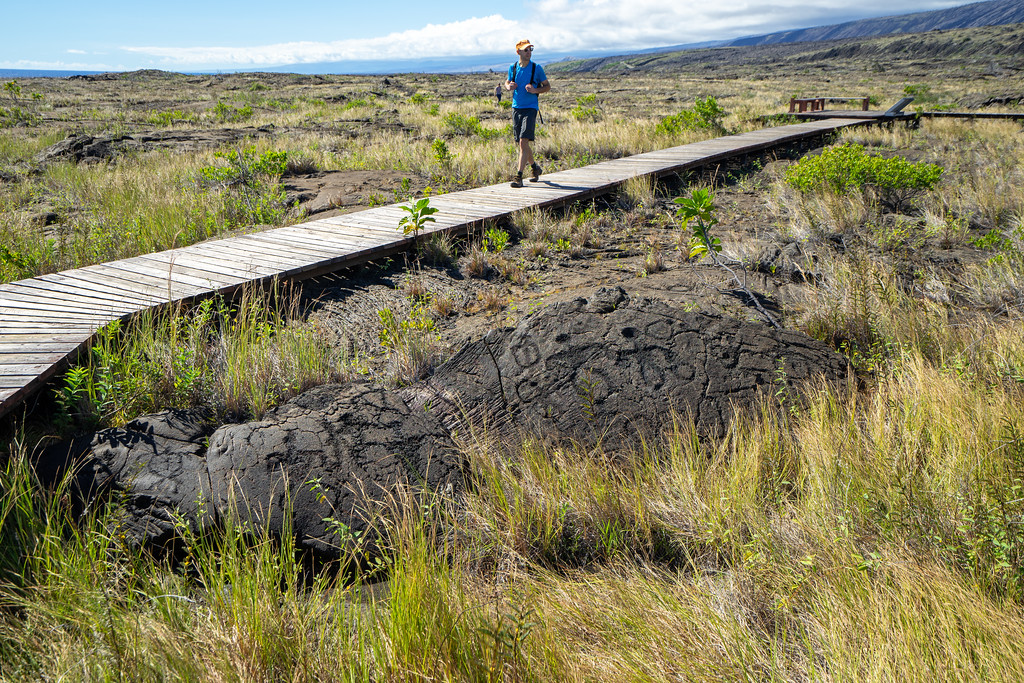 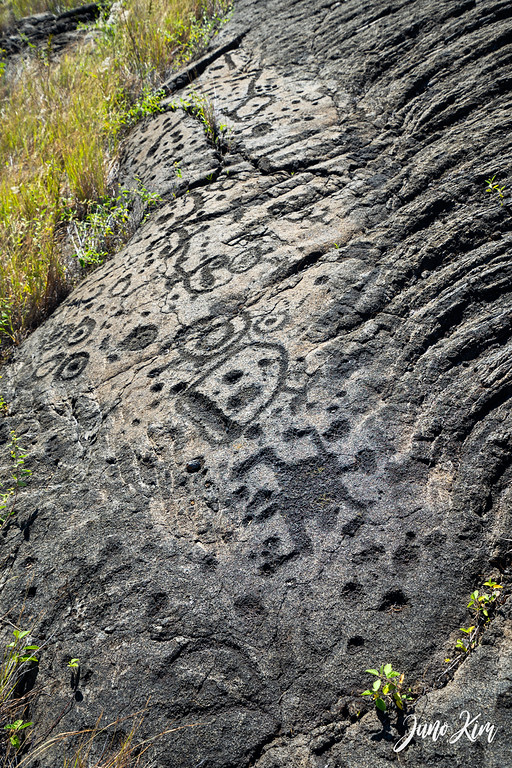 The Chain of Craters Road leads to Hōlei Sea Arch. The road condition might change depending on the volcanic activity. The end of the road was closed when we were there, so we parked and walked to see the Arch. At present, the sea arch is about 90 ft. (27.4 meters) high. It looked like it could collapse anytime. According to the National Park rangers, the sea arch will eventually crumble but another will replace as the cliff slowly migrates inland.

One of the highlights of the trip was meeting the nene, Hawaii’s official state bird. We ran into a lone nene in the park. It was the cutest and friendliest bird ever! It wasn’t afraid of us and was even curious about my camera and hung around for a while. We enjoyed meeting this special bird. Nene is the rarest goose in the world. It was once common in the Hawaiian islands but hunting and introduced mammals hurt its population. It is now back from the brink of extinction. But it is still protected. 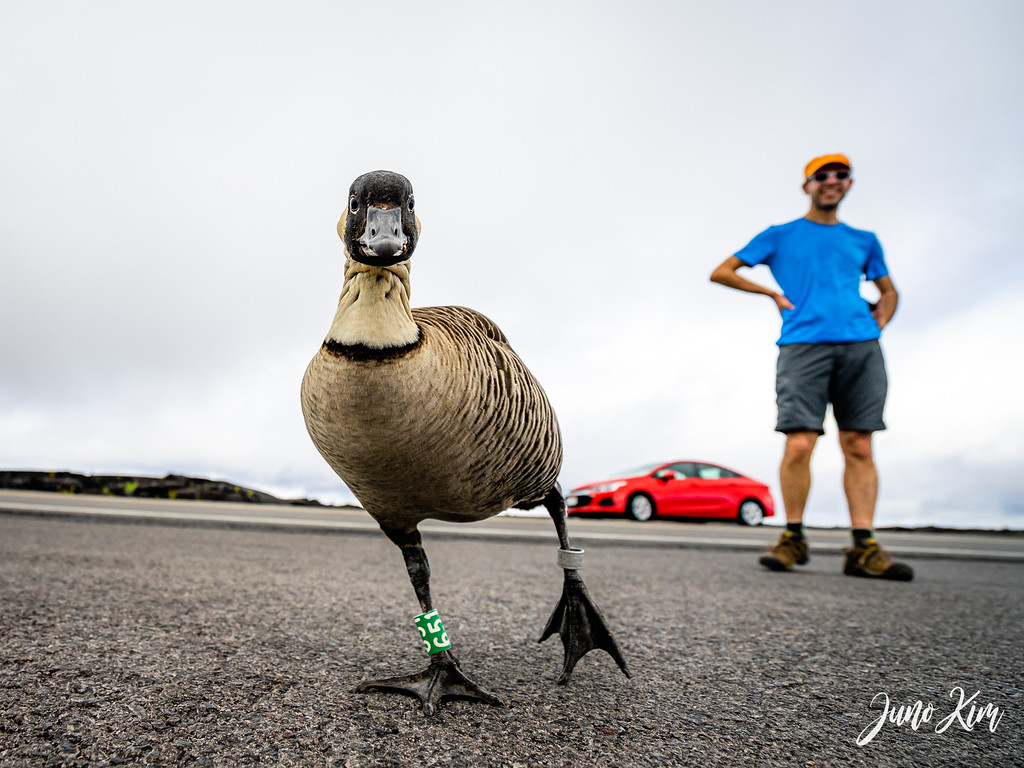 Namakanipaio Campground is hands down, the nicest smelling campground. This place is filled with eucalyptus trees, so it smells like a cough drop all day long. It was such a great feeling, waking up with this fresh smell in moist air. We especially liked having a covered picnic area to cook and avoid the rain. It’s managed by the Volcano House, located in front of the Visitor Center. You can make a reservation and pay by phone or simply drop by the hotel to process.

1 thought on “Hawai‘i Volcanoes National Park: Born of Fire, Born of the Sea”