How to Explore Colorful Nuuk, Greenland

Nuuk: The biggest city in the biggest island in the world

Why do I go north? What is that draws me to the vast, inhospitable land beyond the northerly limit of tree growth?
Is it true that the Arctic has a fascination for certain people and that “there is no cure but to put them on ice.”?

-“Land of the Long Day” by Doug Wilkinson

My trip to Greenland was short(-er than I desired) but it was certainly enough to spark my interest in this fascinating island in the Arctic. I often talk about my passion in the Arctic region and my interest and respect for the Native peoples. The same reason derived me to visit and finally move to Alaska and it finally led me to Greenland. One of my favorite books, Land of the Long Day by Doug Wilkinson said the answer I’ve been looking for; “there’s no cure but put them on ice”. From the moment I landed, I was inspired. There is something different about the scenery in the Arctic. I was delighted to see how the Native culture is so much embedded in daily life. People speak fluent Greenlandic language on the street. This place is raw, authentic yet modern, charming, and very interesting.

Greenland is politically part of Denmark but very much has its own identity and proud of it. Geologically and culturally, Greenland feels like one of a kind. I know a few people who skied across the island as part of their Arctic training journey. It’s incredible to imagine that things they must’ve seen and experiences. Well, I’m not going to walk across this entire island but I may go on a multi-day dog sledding journey, who knows? Until then, here are a few tips on how to enjoy your time in Nuuk, Greenland.

I like to start with a museum when visiting a new place. It gives an overview of the destination I’m about to see. Especially in Nuuk, I was excited to visit the National Museum of Greenland, because of my deep interest in the Native cultures in the Arctic region.

The museum was started in the mid-1960s as the first museum in Greenland. The collections have ever since expanded the collections, from excavations and with repatriated material from the Danish National Museum. The museum works with archaeology, recent history, arts, and crafts. The museum houses the central registers of listed buildings and monuments and undertakes conservation provisions of the law on the protection of monuments and buildings, as well as participating in nature conservancy and urban planning.

I was especially fascinated with the New people – the Thule culture and Qilakitsormiut mummies. The people were buried around 1475 just outside the Qilakitsoq settlement at Uummannaq. Two graves held the bodies of six women and two boys – three generations with close family ties traversing both graves. The cause of their deaths is unknown, but it is thought that they all died around the same time in the autumn, shortly after arriving at the winter settlement. They were wrapped in skins and fully dressed. They were carefully prepared according to ancient customs and buried with extra skins and clothing to ensure a safe journey and a good life in the realm of the dead.

Nuuk Art Museum opened in 2005 in the former Adventist Church at Kissarnerqqortuunnguaq in Nuuk. The museum consists of an impressive collection of Greenlandic art and crafts from the beginning of the 20th century with approximately 300 paintings and 400 Greenlandic figurines. The museum has two sections consisting of the museum’s own paintings and a new extension to the building with a large exhibition room which houses temporary exhibitions from Greenlandic artists as well as artists from around the world.

This is the same reason why I loved visiting the Anchorage Museum. The artworks in the place are so unique and contain so much about the destination.

The name “Colorful Nuuk” is quite suitable. Nuuk is certainly full of vibrant colors, especially on houses and street arts. You’ll see some interesting street arts walking around the city. Two large-scale arts are the most recognizable, painted by Guido van Helten from Australia and Icelander Stefán Óli Baldursson.

Visit the Most Beautiful Building

The architecture of Katuaq is beautiful. It stands out against small buildings painted with bright colors. Katuaq’s architecture was inspired by waving northern lights, icebergs, and the play of light on ice and snow. The building was designed by architects Schmidt, Hammer & Lassen of Århus Denmark. Katuaq is a cultural venue for the whole of Greenland. It was opened on the 15th of February 1997. The cafe in the venue, Cafetuaq is a good place to enjoy lunch or dinner, mainly made with Greenlandic ingredients. I loved walking around the building and people watching here.

Pay Your Respects to the Inuit Goddess

Mother of the Sea

The Mother of the Sea is the mistress of all sea animals and sea birds. When humans break the existing norms and wrongs are done against the course of nature, she is defiled by impurity; her hair is clogged wit dirt and she holds back the prey. This means that the hunt of humans will fail. It is the shaman’s task to clean her head and hair. This purification frees the animals, which become prey. At the same moment, everything came alive, and there were a bear, fox, hooded seal, bearded seal, ringed seal, harp seal, common seal, walrus, narwhal, and all manner of birds.
This is a passage from the legend of the Mother of the Sea, probably the most famous of all the Greenlandic myths and legends. The legend’s universe is colorful and fantastic, and the overall morale of the tale is that people must not be greedy and that they must observe society’s customs and the word of the shaman.

When the snow starts to melt, those of us living in Greenland start to anticipate the intense Arctic summer. The locals cannot wait to sail into the fjords and spend time away from everyday life. Many Greenlandic families have their own traditional spaces for hunting and gathering; it is time for relaxing, being with friends, and loved ones. Head out to Nuuk Fjords on a small water taxi to enjoy this exquisite view and fresh Arctic air! I had a great time cruising with Nuuk Water Taxi.

The scenery of Nuuk is exquisite. The mountains here look quite different than any other place in the world. The sharp and jagged peaks such as Saddle Mountain (Sermitsiaq), glacier-shaped round hills, and the colorfully painted buildings all mesh well together. Although Nuuk is the largest city and the capital in Greenland, it has a small-town feeling to it. Walking around residential neighborhoods, I saw evidence of subsistence living which reminded me of my adopted home Alaska. You’ll see some interesting street arts too. I loved how the lifestyle in Greenland is still strongly influenced by the local Inuit population, which is how it should be. Actually my visit to Greenland sparked me to get involved in the Inupiaq language revitalization movement after seeing many Greenlandic young people fluently used the language.

Colonial Harbor is the oldest part of the modern city of Nuuk. This area was first occupied by the ancient, pre-Inuit Paleo-Eskimo people of the Saqqaq culture as far back as 2200 BC. The city of Nuuk after the colonization was founded in 1728 by Hans Egede. His statue stands on a small hill near Colonial Harbor, a great place to see the views of the city, overlooking the Lutheran Nuuk Cathedral (Annaassisitta Oqaluffia). There’s a national debate going on about the statue along with the decolonize movement in the Native communities around the world.

Make sure to drop by local shops if you’re interested in bringing something back home. There are many places to pick up small souvenirs to remember your trip. If you’re looking for local clothing made with sealskin or qiviut, prepare to spend quite a bit of money. But those will protect you from all weather conditions in the Arctic. Qiviut is the inner wool of the muskox. It’s stronger and warmer than sheep’s wool, and softer than cashmere wool. I have a neck warmer made out of qiviut and it’s the best piece of clothing I have! Something to think about if you’re buying any big quantity of animal products (seal skin clothing, for example), you might want to check the customs policy from your country.

I had a few favorite places that I like to hang out in between walking around the city like Cafe Esmeralda and Cafe Pascucci. I had a great meal and chat with local friends at Seamen’s Home. I also shopped at the local grocery stores for snacks and meals because prices aren’t cheap in Greenland. It makes sense; because not a lot of things grow here. But Greenland is a great place to taste the local flavor that you can’t experience in other places. Greenland is one of the few places in the world that you can order marine mammals such as whale meat. You can even get it at your local supermarket. It’s common to see local hunters sell seal meat on the street after a successful day of hunting. You might be invited to a local friend’s house to share their food, which is the best way to experience the local cuisine. Some of the flavors might be strange for those who are not used to the taste but this subsistence living has been the reason why the Native people could survive in these harsh Arctic environments. If you’re concerned that you wouldn’t find anything you like to eat, don’t worry. There are a lot of European style foods available at most cafes and restaurants as well.

Of course, how can I not mention northern lights viewing? If you’re visiting Greenland in between September and April, you have a great chance to enjoy the magic of aurora borealis. But not to mention, it’s weather dependent. On the first night, I saw the dancing lights right outside of the hotel window. What a great welcome! For more information and photos of northern lights from Greenland, visit my post: Northern Lights Photography in Nuuk, Greenland.

I’m waiting to go back… 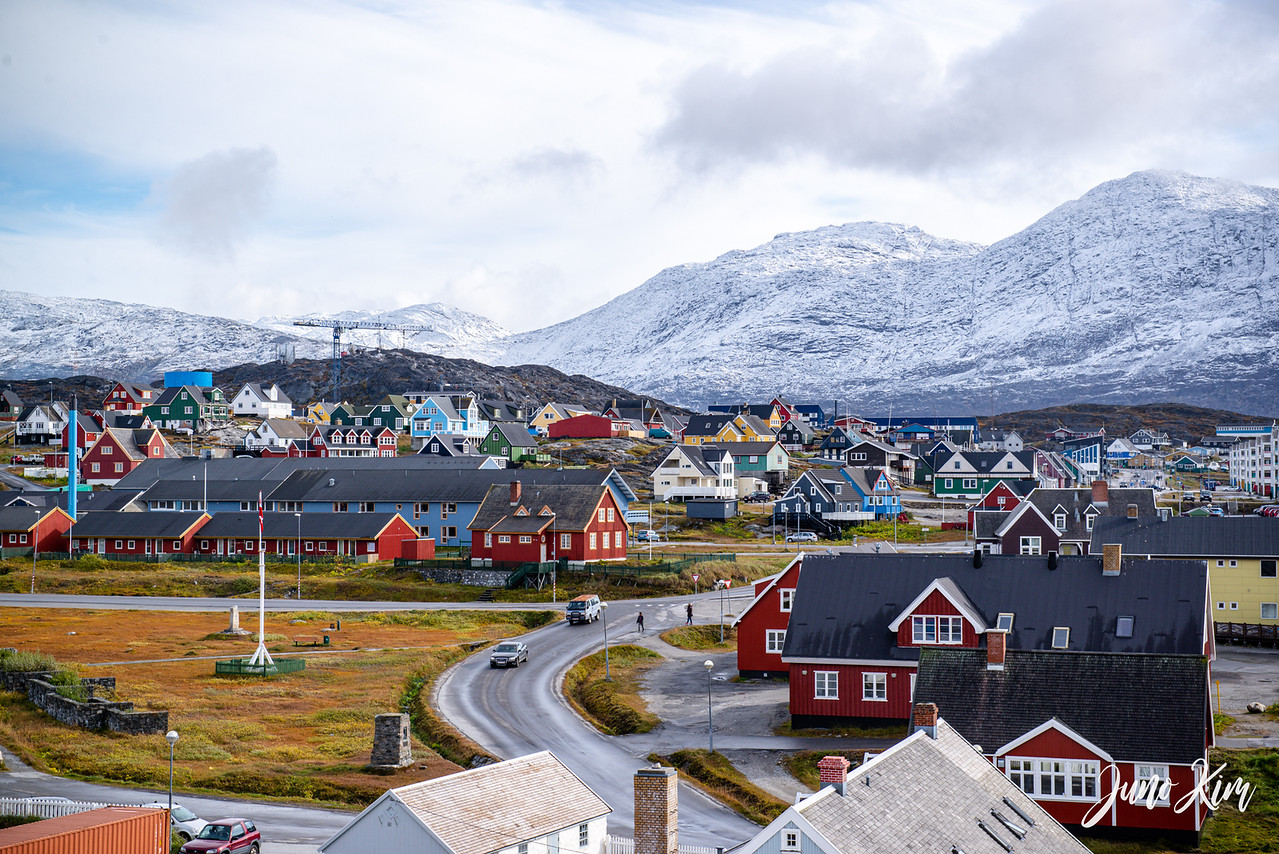 My adventures in Greenland is yet to finish. I’m longing for my future trips to Greenland, hopefully not too far from now. Until then, I will keep in touch with the local news and dream about the scenery. For more information about how to explore Nuuk, please visit these useful sites below:

Here are some photos from Nuuk to inspire your adventure.

1 thought on “How to Explore Colorful Nuuk, Greenland”