What Does the Thirty Meter Telescope Mean to the People of Hawaii?

Visiting Mauna Kea and the W. M. Keck Telescopes has been on my list for a very long time. Mauna Kea is known as one of the best places on Earth for large telescopes because viewing conditions are excellent due to high elevation and low humidity. When I was working at an observatory in Korea as an astronomy teacher, we used to reference Keck Telescope’s size, as its diameter was almost two times bigger than our little dome. To young astronomy enthusiasts, it was the wildest thing you could imagine. A group of us working at the observatory dreamt of seeing the telescope up close and seeing the night sky up there someday. I’ve been to some wild places to chase the darkest, clearest skies. So when Stephen and I planned to travel to the Big Island, I shouted ‘Mauna Kea!’ in my head. Then, we heard the news about the protest.

When I first heard the announcement about building the Thirty Meter Telescope (TMT), I got excited. It meant more chances for the human race to understand the origin of the universe. It was going to be the largest visible-light telescope on the mountain. Can you imagine all the information we could gather from these big mirrors?

But as it turned out there was more to the story than I knew.

The Mauna Kea mountain is considered sacred land for Native Hawaiians. The group of telescopes on Mauna Kea and the Native people has been involved in a very complicated debate for years and it has since escalated after the plan to build TMT got approved. Although the science is the subject of this movement at this point, it is more than that; it’s about the Hawaiian people’s rights. There had been many negotiations and protests over the years, and the latest and current protest started on July 15, 2019, the kia’i (translates to the protector of the mountain) blocked the access road to the mountain preventing the planned construction from commencing. Most of the astronomical facilities on the mountain stopped their activities and evacuated their personnel. Kia’i have been occupying the road ever since.

I heard the news but didn’t realize how serious the issue was until I got to Hawaii. Our friend in Waimea filled us in with what’s been going on and we read some local newspapers. Heartbreakingly, it also meant we couldn’t visit the top of Mauna Kea and the telescopes. (At least I got to visit the W. M. Keck Observatory Visitor Center in Waimea.) But we were dealing with a bigger picture than my little childhood dream, so I wanted to know more. We heard that the protestors were quite open to talking to people who wanted to know more about the issue, so we decided to drive by on the way back from the other side of the island.

We drove up the Saddle Road and reached the telescope access road at 9,000 feet. “Kia’i Stop TMT”, it said. The top of Mauna Kea was lightly covered with clouds. This area became a small village with lots of tents, cars, flags, and signs. We parked the car and walked around, hoping to run into someone who would be willing to talk to us. Some of the people pointed us to the main area, the kapuna (elder) tent. The kapuna tent was located right on top of the Access Road.

There we met one of the kia’i named John and had a long conversation. We were frank about our thoughts and he was very patient answering all our some-what odd questions. I wanted to understand what was really going on. I’m not a Hawaiian Native nor a resident, so I wasn’t here to make any comments but rather to understand the situation better. Thankfully John was patient and knowledgeable so the conversation gave us some insight on the basis of this protest that became a movement. 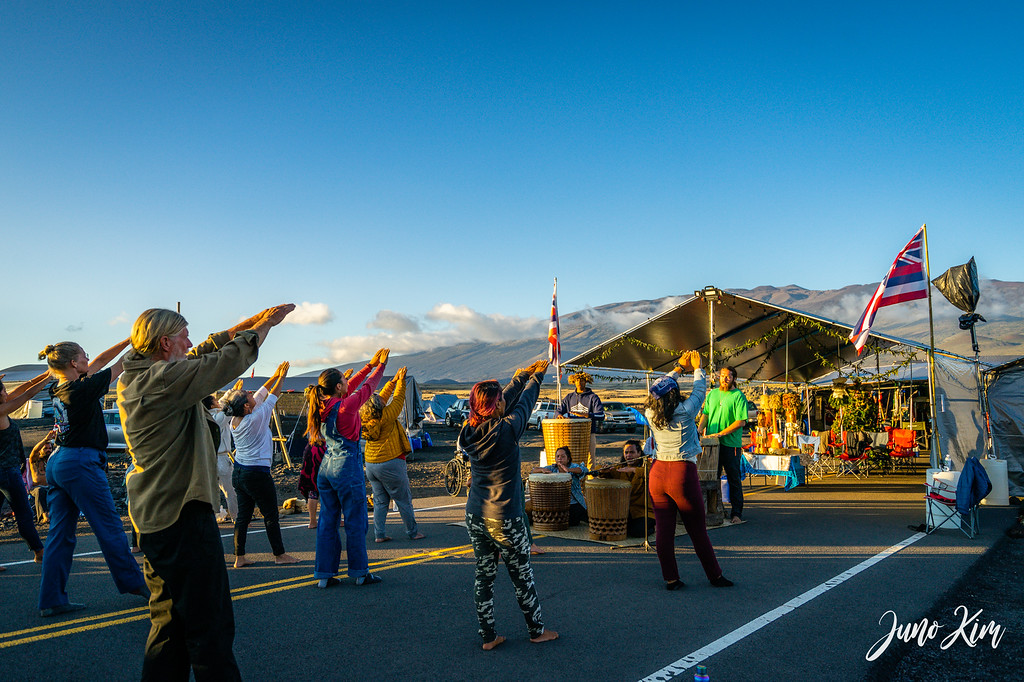 The sun was about to go down and it was time for the daily traditional ceremony called ‘aha, which occurred three times a day. The participants saluted east toward the distant ocean, south toward the volcanic eruption, then west, then north toward the Mauna Kea’s summit. The soft drumming and singing led the dance, and the clouds started to lift. I observed and was invited to join part of the ceremony. As much as I was longing to visit the distant telescope on the summit that was now visible, I was honored to be part of this movement, even for a brief moment.

It’s a complicated issue for sure, considering the colonization of the Native population in this country and around the world. This TMT protest is one of the byproducts of what’s been going on for centuries. It is about the telescope but it is also not about the telescope. No matter which side you’re on, it’s an important moment of history to witness.

I am not sure what will be the result. Part of me wishes the TMT will be built to discover more mysteries of this universe but I also respect Hawaiian people’s wishes. I will continue to follow the news and learn more about it. Here is a series of photos I took on that day. I sincerely thank all the kia’i who allowed me to participate and be part of the movement for a few hours. It remains a powerful memory.

#Learn more about TMT and Manua Kea on this site.

#Currently all protestors left the area in response to COVID-19 pandemic. 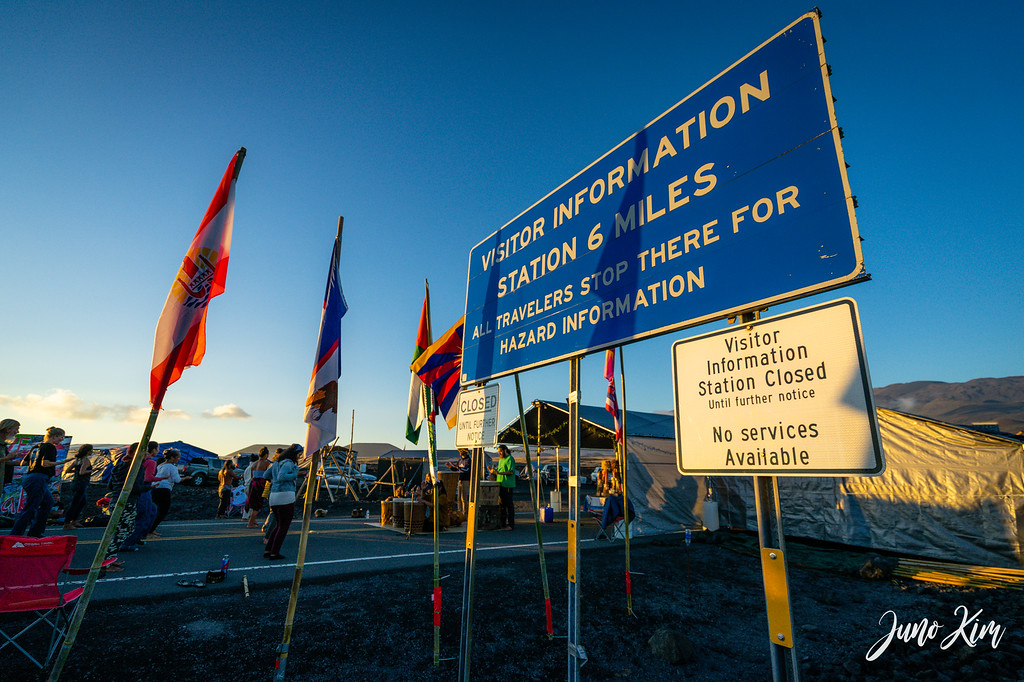 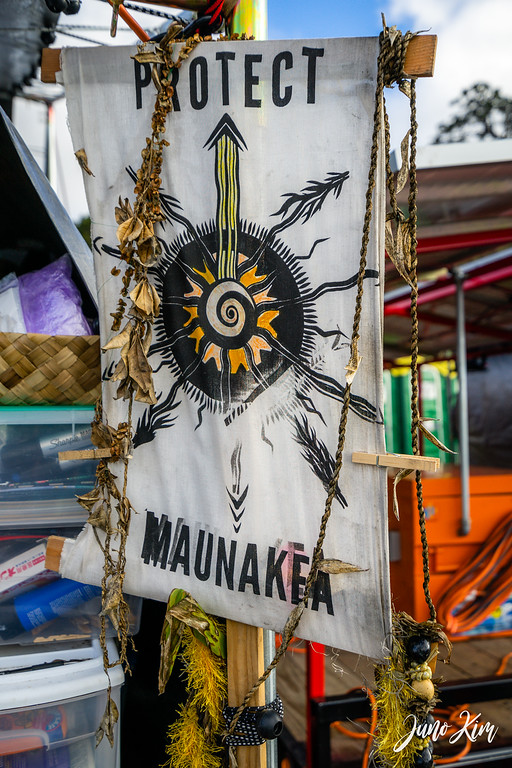 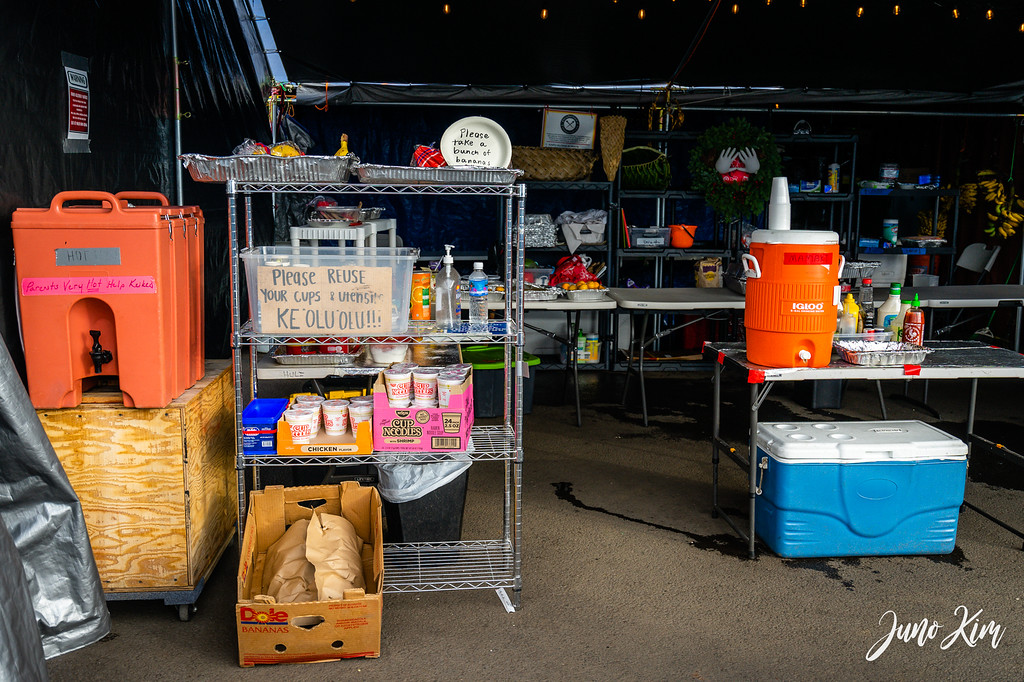 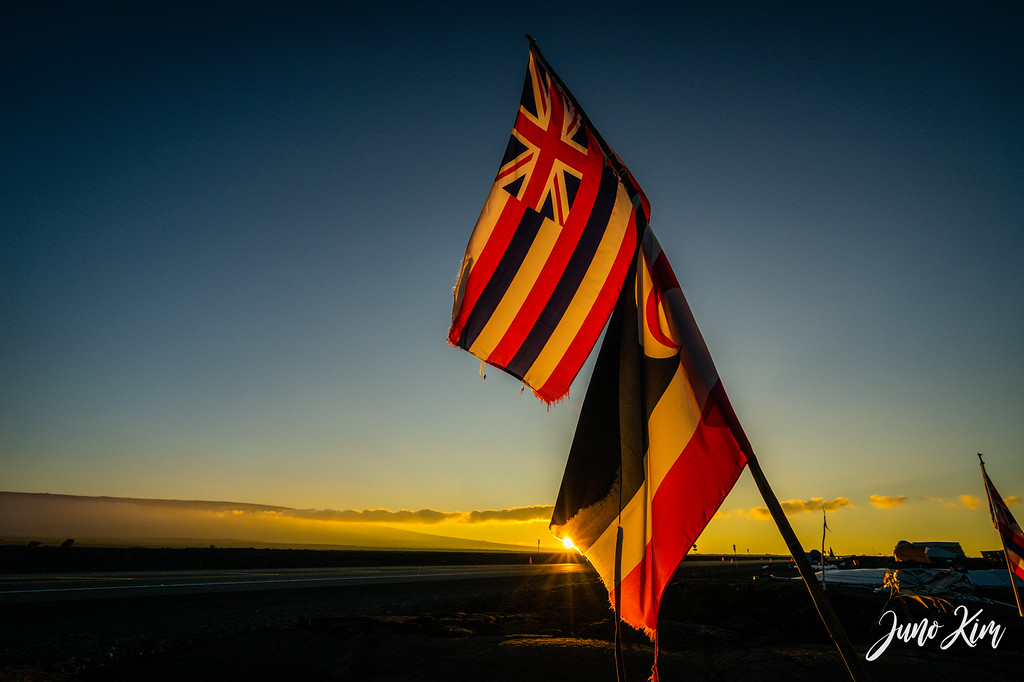