My flight landed at Dulles International Airport at 6:20pm, and I got out at 11:30pm. A lot of American friends have told me, the US immigration officers are the worst people to represent their country. I agree.

Is it a privilege to enter the US?

I’ve never thought of it that way but I guess it is. At least they forced me to think so.

For my third time visiting the US, I almost couldn’t make it. Only a few feet away from the exit door, I had to wait several hours to prove myself that I’m a harmless person. I’m not abusing your system, I have a job to finance myself, and I’m not overstaying illegally. Even though I have a clean record of entering and exiting the country, I’m still a dangerous person to them. So why am I here?

I’m here in America to celebrating Thanksgiving and Christmas with Stephen’s family. After three and a half month of a crazy schedule in Europe, I was ready to be at home with a loving family. I flew into Washington D.C. from Reykjavik, Iceland on last Saturday. The six-hour flight was smooth and painless. I watched a couple movies while eating complimentary potato chips, I filled out my customs form for the US and I was ready to have some burgers in Washington D.C. We arrived at the customs line, and it was packed with people already. It was a Saturday night, at least eight flights were coming in at the same time, but the customs office was seriously understaffed. But what can we do; we patiently waited in the line. For two and a half hours.

When I approached the customs, Stephen was on the other side waiting for me for an hour at this point, and the officer gave me a look and flipped through my passport. Some of the ordinary questions to follow:

“Are you coming from Korea?”

“No, I’m flying from Iceland.”

“What were you doing in Iceland?”

“How long are you staying in the United States?”

And he found my stamps from May, earlier this year. So far, he didn’t even look at me not once. I felt something was going to the wrong direction.

“How long did you stay in the United States in May?”

“Do you have a family in the United States?”

“How do you finance yourself?”

“How much do you have in your bank account?”

And we were done. He wrote something on my customs form, handed my passport and made a gesture to go. I looked at my stamp-less passport, and asked him,

“Did you forget to stamp it?”

“MA’AM, YOU NEED TO STEP OUT RIGHT NOW, COLLECT YOUR BAG AND GET OUT!”

I was certain that something was wrong. I looked down my customs form with a big yellow ‘B’ on it. What does this mean? I guess I have to find out, don’t I?

I headed to the gloomiest place in the entire airport: the waiting room of the ‘B’ and ‘C’ getters. Funny, how the room for the ‘random’ search was filled with a few certain races of people. By my observation, B is for the deeper and longer conversation with more rude customs officers, and C is for the bag search. I was hopelessly waiting in line, thinking ‘What if I can’t get through this? Where should I go?’ There was nothing I can do to make things better but confront the customs officers with the truth, which there was nothing suspicious about in the first place.

The room was getting busier with the same type of people, and two officers on the desk weren’t really doing their job. No one got out of the room ever since I got there. Passports were piling up, babies were crying, but no change but occasional yelling. Seemed like the purpose of this room was lock people in here, not help them to solve the problem.

“This lady’s son is waiting for her outside, and she wants to let him know they she’s here!”

A Chinese man was helping this old Chinese lady who didn’t speak English. He approached the desk and tried to explain the situation to the officers. We all waited in the customs line for over two hours. What if her son left? The son might think that his parents didn’t make it. But all they got was “Sit down and wait!” Wonder if they treat anyone like this or just people in this room.

Finally, they called my name. We had a deep conversation for about a half an hour, about my finance situation and life choices. Basically, things that I had a hard time writing on Runaway Juno because it was painful, and I had to go through all that with a complete stranger who wasn’t really important in my life at all.

The reason why they sent me to this depressing room was because I was ‘flagged’. I am young and unemployed; that’s America’s least favorite type of traveler. I explained everything, clean and honest, and argued that I’m not unemployed, I’m self-employed. I’m writing, I’m freelancing, I’m earning some money to maintain my life, and all that.

During the conversation, I realized the harsh reality, once again. I am, we are, not only fighting with friends and families who are used to having a conventional lifestyle, but also we have to fight with the foreign governments. As well as I have to prove myself to the people surround me, I have to stand up for myself and shout I am legit.

“Hey, I sent a lot of people back because they said they worked online. If you work online, how can you be out of your country for more than three-month?”

Officer C, you just answered your own question while questioning me, but whatever. 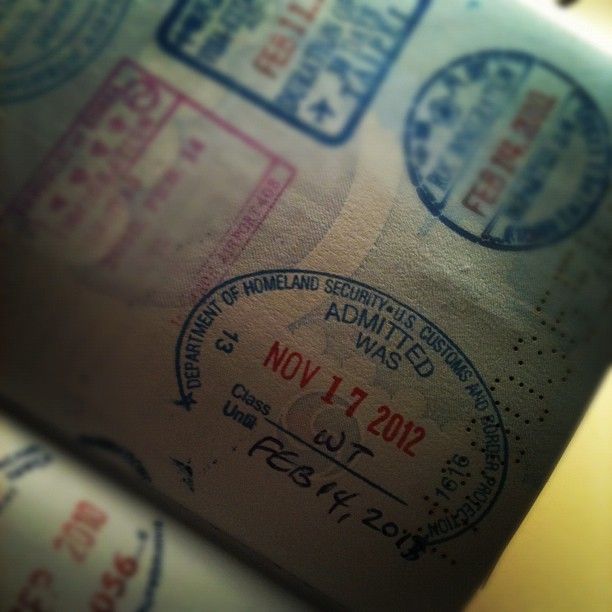 The whole thing made me sad. Not because standing in the line for four hours was so tiring, not because I didn’t eat anything since I board my flight to Reykjavik, but because of the fact that I can easily be a nobody to these people. I’m unemployed. The customs saw me as same as the illegal workers. I’m homeless and broke. None of these are true, but they certainly had the power to make me feel like everything. He opened up the Pandora’s Box that is full of question marks.

At the end of the interview, he wrote the magic number on my passport: February 14, 2013 – the day I have to be out of this country no matter what. I know where I’m not going to be in the Valentine’s Day next year.

Being a pioneer is awesome. Getting wow from people is an amazing feeling. I don’t need an approval somebody else to live a better life, but admit it; it helps. All human beings are selfish and childish – we need somebody to recognize that what we are doing. But sometimes, I just want to be a normal person who doesn’t have to have a bad relationship with the family because of the life choices and doesn’t have to worry about getting questions from the immigration officers. I want to be an awesome entrepreneur and I think I’m getting there, but it is a tiring thing. Thanks to my entrepreneur spirit, I saw the dark side of the US customs wish I haven’t though.

Did you experience any similar situation in other countries? Have you ever get denied?

86 thoughts on “The Dark Side of the US Customs”