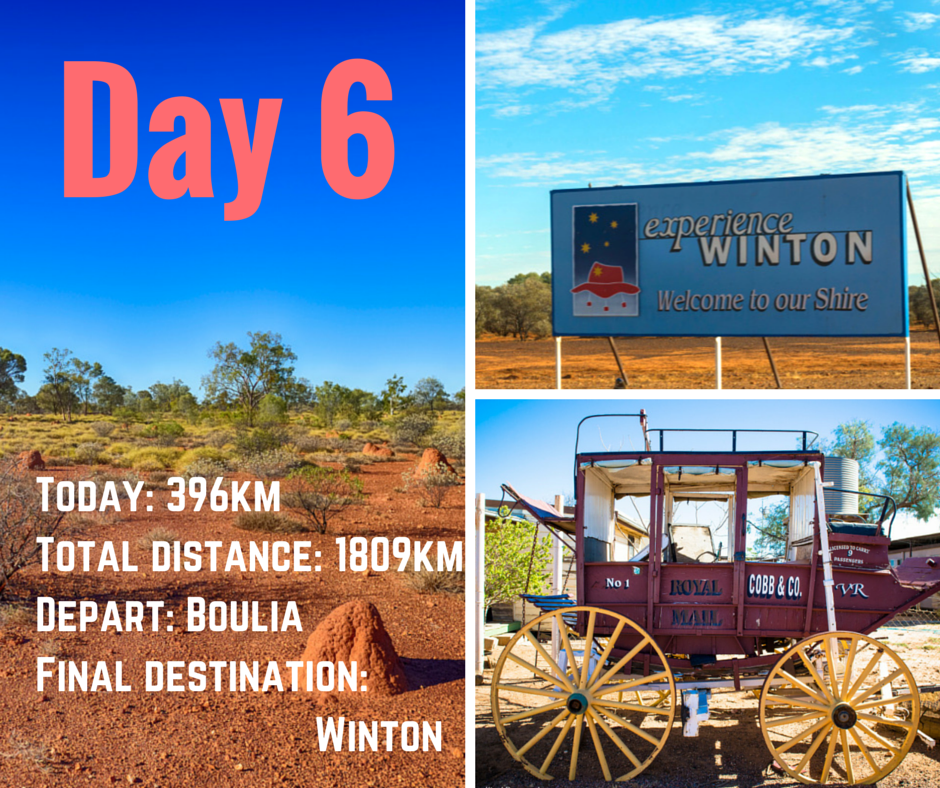 To the Jump Up Country!

It’s already the second last day of the Trailblazer. As what Smithy said, “It’ll be over before you realize it.”

The landscape in Outback Queensland has surprised all of us many times over the last few days, but today is the biggest highlight amongst them all. Mother Nature is a mysterious lady. The land that was as flat as it could be, rose above the ground all of a sudden. We are in the Jump Up country. Jump Up is a common term in Australia that defines a point where the land rises abruptly from one level to another. Peter said this part of the Outback is “Like Arizona, but smaller.” The land is so old, all the mesas have gotten shorter. All around us, small red table mountains were everywhere.

We go up to Cawnpour Lookout to take a good look at the scenery. Here we can see the famous Lilleyvale Hills. Oh, Outback, you never cease to amaze us.

A “town” might be a bit of a stretch – Middleton town is what’s left behind from the Cobb & Co. days. It made history in 1862 when the first white men, John McKinlay and his search party for Burke and Wills, entered the area. Later it became the site of the Middleton Hotel in 1876 and became the staging post for Cobb & Co. The town left the pub behind, and it became one of the most isolated hotels in Outback Queensland. Check out the “Middleton Hilton”, the real bush Hilton. That’s what I call the Outback Aussie humor.

I think I need to explain more about Cobb & Co. It was the name of a transportation company in Australia. It flourished in the late 19th century when it operated stagecoaches to many remote areas in the Outback. The first service began in 1854 in Victoria, and the service expanded to Queensland in 1865. Middleton and various other towns were the staging posts. Many of the deserted towns with abandoned pubs/ hotels like Betoota used to have the same role. Today, Cobb & Co. is a coach operator in Melbourne.

Just as we are getting closer to Winton, Peter’s phone starts ringing. We are finally entering a phone service area. All the ‘ding ding’ noises from flooding text messages, emails, and voicemails create a gray cloud over our heads, and it’s called: “work”. We’d complained about the lack of connectivity, but sometimes we can only be truly ourselves without it. It’s sad that we have to force ourselves to not have a connection. Where is our self-control gene?

Who loves dinosaurs? If you felt a little hop in your heart just then, you have to come visit Winton. This is where you’ll see the world’s largest collection of Australian dinosaur fossils. Most of them are fairly new to the world. New species have been discovered over the last decades, and there are more to come. It’s an exciting time in Winton for dinosaur enthusiasts.

As usual, we scout our home for the night before going out. Oh wait, we are staying at a motel tonight! After five days of swagging, we’ll be sleeping in a room on a bed with a ceiling. I enjoyed my swag, but I also missed a power outlet.

We hopped on Neville the Devil for our excursion to Bladensburg National Park. The Anzac Day Eve’s ceremony and dinner will be held here. A park ranger, Alastair, joins us for guiding the Trailblazers through this exquisite land. Only 17km away from Winton, this park has some interesting history to tell.

As soon as we enter the limits of the park, herds of kangaroos run away from the car. It is quite a scene to see a few dozen kangaroos jumping (running?) as one.

Bladensburg National Park used to be Bladensburg station. The property was officially designated a National Park in 1994. The original homestead is now the information center. This is a great place to see the natural state of the land. The park features grassland, channels, sandstone ranges, and mesas. Scrammy Lookout offers a great view! It is also home to 10 endangered animals and 15 endangered plants, including Julia Creet dunnart, Octopus Tree, four types of Mitchell grass, Finders grass, and Spinifex grass. Don’t know what Spinifex grass is? “If they don’t know what it is, get them to sit on it,” Alastair says.

Neville the Devil and the rest of the Trailblazers head down to the Bladensburg homestead for our Anzac Day Eve’s ceremony and dinner. For this occasion, we all dress up in military uniform. I am a sailor. It’s probably the first and last day for me to be in the military.

Anzac Day is a little more special to Winton. This small town sent and lost 20% of its population to the military. The skills they learned in the Outback were highly valued. One of the men who was at Gallipoli, Colin Morgan-Reade, lived and worked where we stand. His 2nd Light Horse Battalion and his family are with us tonight.

The night continues with Tania Kernaghan and the Heartland Theatre team.

Off to (a real) bed for the Centenary of Anzac Day tomorrow: the Dawn Service at 5:45am.