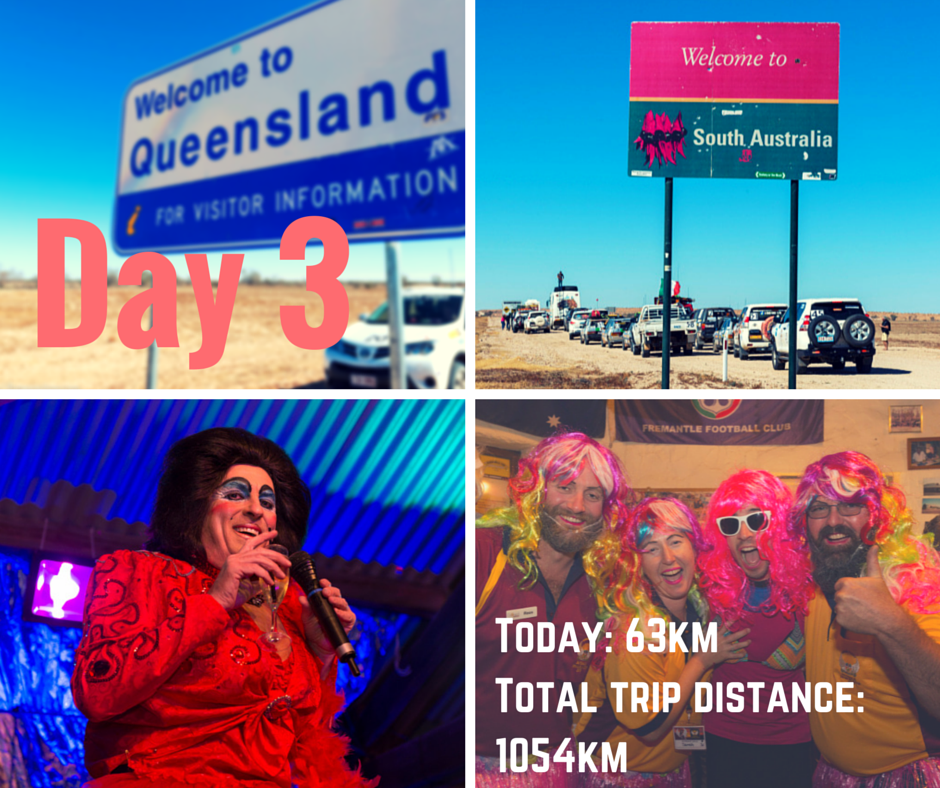 Plans for today? Pushing our cars over the South Australia border and dressing up as drag queens.

I woke up from another fine night in my swag. It’s a bedroom you can zip and roll. How convenient!

So today, we were heading down to South Australia. We were just 13km away from the Queensland/South Australia border. It was my first trip to South Australia! As a Trailblazer tradition, all the motors must be switched off before the border. So how did we cross the border? We pushed the car of course! Smithy’s Nevil the Devil (big tour bus) would be the biggest challenge…

All the cars lined up at the border for their turn. Nevil the Devil and our Stay on Track Outback police crew had a hard time especially, but everyone safely made it to South Australia. Hurray! We even got a chance to take a photo with the “Welcome to Queensland” sign.

We extended our trip to South Australia a little. We stopped for a smoko and photo break at a nearby airport and station, Pandie Pandie. Pandie Pandie, or Pandy Pandy is a petrol lease that operates as a cattle station. It looks like it’s been abandoned… maybe it’s still running. We climbed yet another sand dune in the area. What a magical part of the world. We couldn’t visit the station because the road was unusable due to the recent rain.

It was a short visit, but nonetheless, I’ve been to South Australia!

Priscilla is an iconic character from a famous Australian movie, “The Adventures of Priscilla, Queen of the Desert” . It’s a fictional story about two drag queens and a transsexual traveling across the Outback to perform a drag show. I don’t know the movie, but it sounds fabulous!

Peter had prepared wigs for today. We positioned them on him and Stephen’s heads, and put a little (read: too much) make-up on them. Who knew they would look so good in wigs and with a feminine posture! Stephen’s wig looked like his own hair, and Peter’s resembled Rod Stewart. Sophie and I wore dramatic makeup. I made a dress out of my yellow sarong and attached our new stuffed Emu under my arm. Sophie wore a hat that lit up like a Christmas tree. It wasn’t exactly drag costume, but it was a dress-up of some sort I guess!

We were one of the most radical ones but of course, the Birdsville Hotel pub was soon filled with Trailblazers in various costumes and so many ‘beautiful’ ladies. I applauded their determination and thorough preparation. We got a Hawaiian quartet, Elvis, many men wearing women’s bras, and thanks to Sophie’s genius ‘donate for a kiss and lipstick’ campaign, 90% of people ended up with bright pink lipstick on. She raised over 1,000 dollars for the campaign and earned yet another 750 for auctioning off her kiss! The money was added to the donation for Angel Flight.

The Priscilla night turned into a 60’s night with a surprise performance by Abbasolutely. But there was an even bigger celebrity waiting for us. A fabulous Italian model/ TV star made a grand entrance with her big tour bus. Her name: Sofia! She dominated the stage from the moment she stepped out of the car. Everyone just couldn’t believe what was happening. Her filthy and inappropriate jokes, over-the-top make-up, and beautifully shaped legs were just enough to make people fall in love. We were all baffled by her existence. Was she with us the whole time? Who was s(he)? How did we not recognize this talent before? But some things just have to remain a secret. Her name was Sofia, and she’s a drag queen! She’s our Priscilla.

The night went on with a drag race and another performance by wig-wearing John Paul Young. We had yet another surprise guest: Australia’s favorite politician, Malcolm Turnbull. He came to support the great cause. For his good heart, he got big fat kisses from our Marios, and they lifted him out from the stage.

You never know what to expect in the Trailblazer…