Outback Trailblazer [Day 4] Diamantina Shire Continues and There are Camels

Day 4 Diamantina Shire Continues, and There are Camels

Another big day. Today we are leaving Birdsville to Bedourie. We are continuing the tour of Diamantina Shire that incorporates Betoota, Birdsville, and Bedourie. We’ve been traveling in the Birdsville area for two days, and are still on Roseberth Station that Mayor Geoff owns. Remember? The Diamantina Shire covers 95,000 square kilometers yet is home to only 11 stations and 300 residents. Wow.

To put it simply, the difference between stations in the Outback and the coastal areas is that the coastal stations have 11 cows or sheep in 1 acre, but here they have 1 in 11 acres. In other words, it’s a big land out here.

First on the schedule is the king of all meals, breakfast! The Betoota team is cooking up breakfast at the nearby Dingo Caves. It’s so named because people thought the caves may have been used by dingoes to look after their pups. It’s a great place to view the surrounding countryside, including the rare Waddi Trees (Arcacia Peuce).

After having breakfast with a view, we head north.

Journey along the Bilby Way!

The road between Birdsville and Bedourie is also known as The Bilby Way. This 186km road is named after the rare and endangered bilby (rabbit-eared bandicoot).

I don’t know when, where, or why, but everyone leaves a shoe here. We also participated in this tradition.

The building was built in the 1870s from local limestone. It was abandoned by Sir Sydney Kidman after battling extreme drought in the early 1900s. Now it stands on Roseberth Station.

98km: Glengyle. We are finally leaving Roseberth Station after two days of traveling.

All the Trailblazers turn right to Bilpa Morea, the world’s largest claypan. Claypan is a geological term for a dense, compact, slowly permeable layer in the soil having a much higher content of clay than the overlaying material. It’s hard when dry, and sticky when wet.

Camels in the Outback?

There’s a surprise guest waiting for us. Meet Ralph. Ralph lives in Glengyle Station. He used to live in the wild but now he lives in the station, and his main job is to play with the children. Why didn’t I have a pet camel as a kid?

Surprisingly, there’s a big population of camels in the Outback. It puzzled me when I first saw one in Charlotte Plains in Cunnamulla, but here they are everywhere. They were imported from Afghanistan and India during the 19th century for transport, and many were released into the wild after motorized vehicles came along. Many camels were used in big expeditions in the Outback, such as Burke and Wills’ expedition to the Simpson Desert in 1860.

We head back to The Bilby Way, and north to Bedourie.

We cross many channels on this road. It is the channel country after all. Some of it still contains quite a lot of water due to the recent rain, even though it’s been quite dry out here for a few years. We see quite a lot of birds and take in the iconic views at Cuttaburra Crossing (20km) and Kings Creek crossing (50km).

The town of flies…

As soon as we get out of the car, the first thing that welcomes us is… flies! There was quite a big population of them in Windorah, but I didn’t think much of it. But here, in Bedourie.- whoa! It is, definitely yet another a new experience for us. They are everywhere: on food, faces, legs, eyes, backs, hands, and in the car! I didn’t expect to be defeated by flies. By the heat, lack of connectivity or long distance, yes, but not by flies.

Another difference is the climate. Believe it or not, it’s been quite chilly for the last few days. We always had our winter jackets on. But in Bedourie, summer is here finally! Stephen and I thought we skipped summer this year (traveling from Korea’s winter to Australia’s autumn), but here it is. A beautiful hot day (with flies).

Lunch is served in the park. It’s almost impossible to eat a bite without swinging our hands everywhere. Stephen finally gives up on his food and puts the plate down. Thankfully that attracts all the flies near our face! There’s the trick.

It’s going to be a long day.

As usual, we lay out our swags in the caravan park. At 3:30 pm, an adventure is waiting for us.

Australia’s best kept secret: the crystal clear waters of Pippegettl Waterhole, fed by the hot desert springs from the Great Artesian Basin. It’s not listed on any maps! It’s a special treat for the Trailblazers thanks to local gurus Doug and Matt.

To reach the waterhole, we have to cross many small sand dunes. That’s why only 4WD vehicles were recommended for this part of the day. It reminds me of the time in Namibia when we had to cross big sand dunes, and everyone laughed hysterically because we were so scared.

The landscape here, again, is quite different from others. It is almost as if a scene from a children’s book came to life. There might be some wise talking trees, frolicking bunnies, and a grandma kangaroo in the bush.

A cold beer with a great view of the Oasis is enough for me to say “Ah, life is great…” Except for these damn flies! More exposed skin (after I change into a swimsuit) means more playground for the flies. Oh my goodness it was bad. I stick some grass on my hat to cover my face, cover my body with a sarong, and continue with my beer. If you can’t avoid it, enjoy it, right?

The way back to Bedourie is the highlight of the day. Thanks to Smithy, who came with us, we learn about various plants and trees in the region. After crossing a few sand hills, we take a bit of a detour while the sun’s going down. Sunsets in the Outback have always been epic, but we knew it would be something different today. We have 360degree views, and the whole sky starts to change colors, a rainbow of colors in each direction. We stop the car and pull out a chilled white wine to savor this moment. 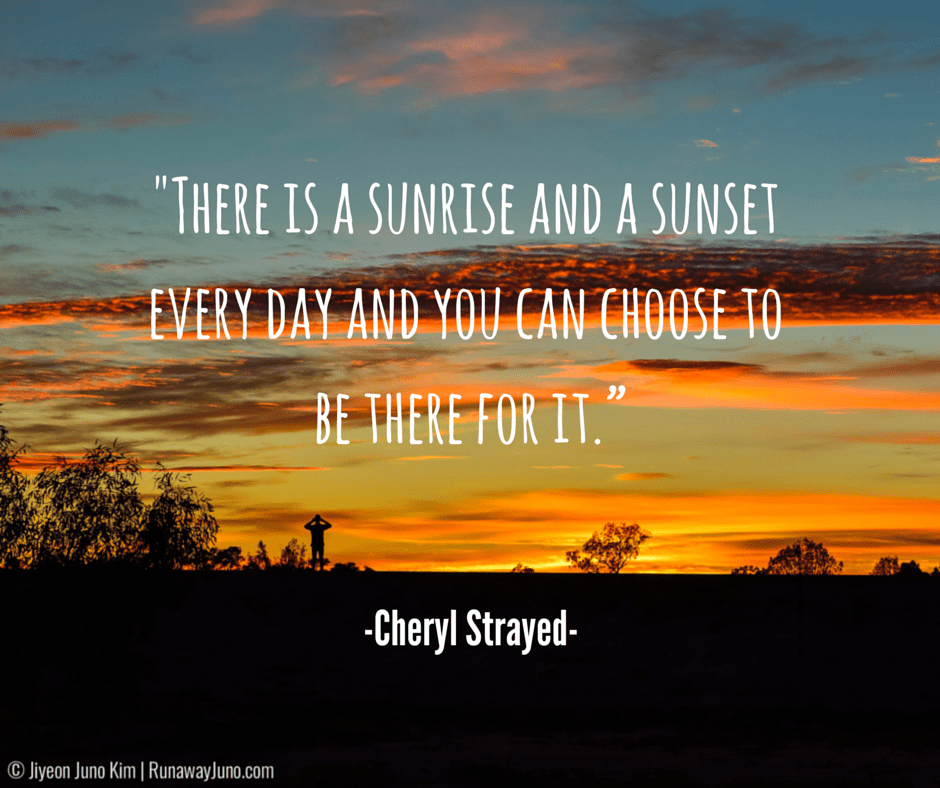 “There is a sunrise and a sunset every day and you can choose to be there for it.”