Finding a good temporary home is always an interest to digital nomads. Romania’s Bucharest should be high on your list.

Is Bucharest the next Chiang Mai?

Even though it’s on the other side of the globe, I feel like Romania is Korea’s sister country because of one thing in common: Romania and Korea are nations with the fastest internet speed in the world. It’s quite an honor and I’m happy to share that with Romania!

I finally visited Romania for the first time, traveling Transylvania (visiting Dracula attractions of course!) and living in Bucharest for a month. It’s hard to imagine a better home for a digital nomad than the country with the fastest wifi, don’t you agree?

Why did I love Bucharest so much?

Stephen and I enjoy small towns rather than big cities. We considered settling in Sibiu while researching places to live in Romania. But we liked the options of apartment rentals in Bucharest much better than Sibiu since it’s a bigger city with more apartments. We chose one that was walkable from the city center and near a big park.

Undoubtedly, the internet speed in Bucharest was immaculate. Even comparing with Budapest, the connection was much faster and stronger. There are many coffee shops that act as a great workplace. If you enjoy tasting different kinds of coffee, there are also a lot of small coffee shops that are serious about their product.

Our favorite Tucano Coffee is actually from Moldova. There are several branches in Bucharest and all are great for working. Coffee is tasty and reasonably priced, it’s spacious, and the interior is decorated with interesting paintings and objects from their coffee plantations.

It gets crowded almost every day and especially on weekends. The atmosphere here is great to get the creative juice going. It’s perfect for casual meetings and working over a great coffee and brunch.

If you are a coffee enthusiast, you can’t miss Origo. Well known as the best coffee in town, Origo is serious with what they offer. But sorry, working on the laptop is not allowed.

Play: A short getaway to Transylvania 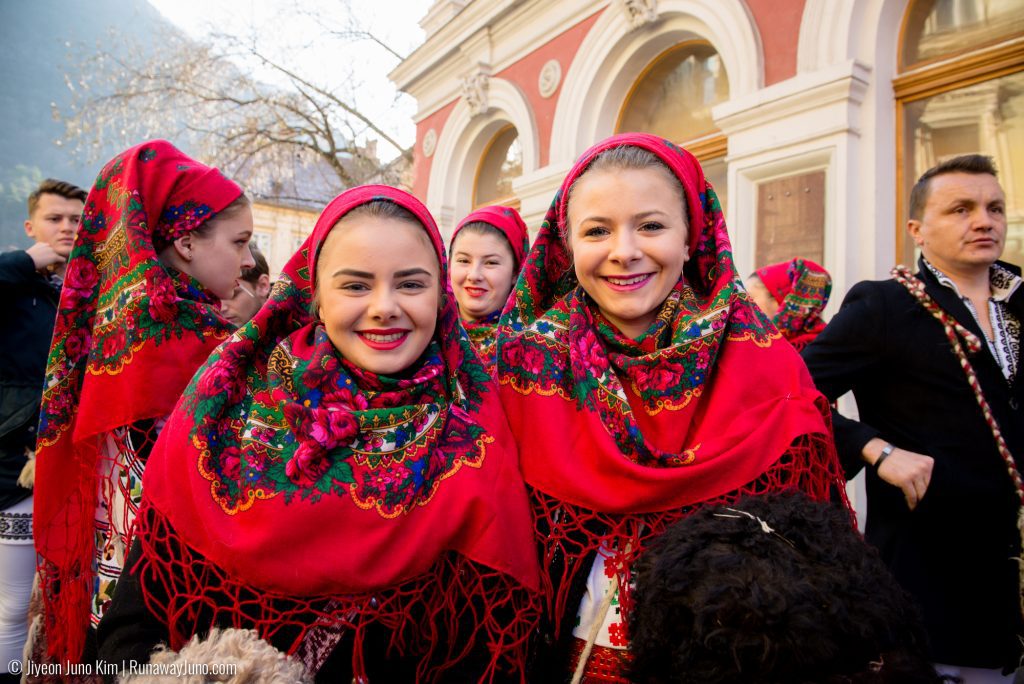 Romania is a relatively big country (12th biggest in Europe), but it is small enough to make short getaways around the countryside. From Bucharest, you’ll be in Brasov in 3 hours to get to Bran Castle. The famous Peles Castle is 2 hours away from Bucharest, on the way to Brasov. You can cover quite a lot of places in Transylvania in 2-3 days. In summer, enjoy one of the most beautiful roads in the Carpathian Mountain that transforms into the winter wonderland in winter.

We had a hard time finding a good supermarket in the neighborhood when we were in Budapest. But it was different in Bucharest. We regularly shopped at our local produce market for fresh vegetables, fruits, and meat. It was also the place where we mingled with the locals. Beyond that, there are several mid-size supermarkets in one neighborhood. We also learned that there are free shuttle buses to/from the big supermarkets. 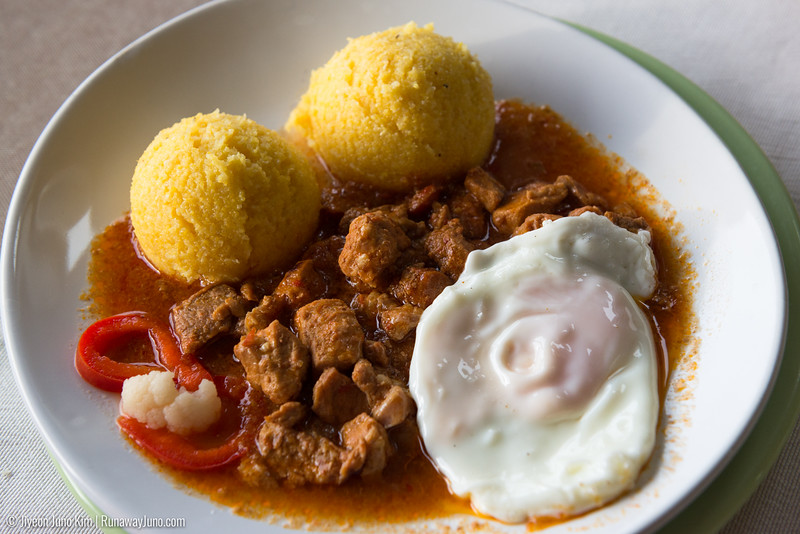 Ah, Romanian food. Why didn’t I know this before? I enjoy learning about other cuisines and trying to replicate the taste. We had so much fun eating in Romania. Where to start? When we were traveling in Transylvania, I found my favorite dish: tochitura. What not to like? It’s a dish made with three kinds of meat (pork chop, sausage, pork belly) in tomato sauce, served with polenta.

The most popular restaurant in Bucharest, Caru’cu Bere is a special place. Registered as a historical monument, this building is built in the Neo-Gothic style and decorated with paintings, stained glass, mosaics, and carved panellings. They offer house-brewed beer and many great dishes. We went to celebrate Stephen’s birthday with a nice meal, cheerful atmosphere, and great beer.

To taste traditional Romanian dish, head down to La Mama.

Traditional Romanian food is great but how can you resist Turkish kebab? Dristor Doner is the best kebab restaurant I’ve ever been.

Get to know great Romanian and Moldovan wine here. 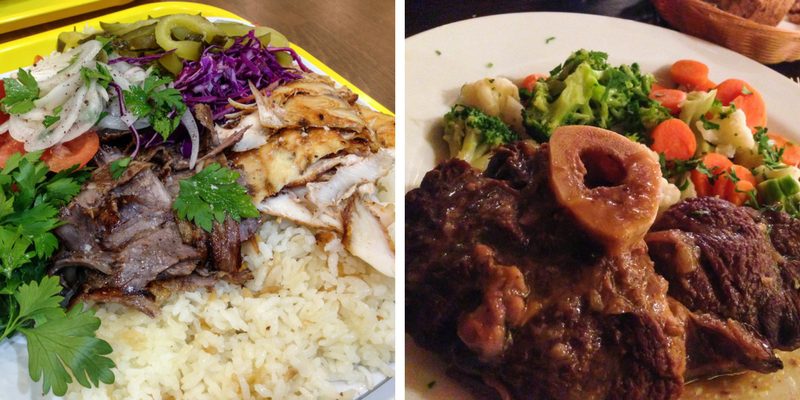 Get around: Public transportation

With trams, buses, and subway lines, Bucharest is a great place to live without a car. The city is very walkable and important attractions are well-connected with the public transportation.

Of course, we can’t work all the time. But even between walking to a coffee shop to work, there are many interesting sites that tell Romania’s complex history.

Bucharest has a lot of beautiful buildings. There’s a reason why it’s called “Little Paris”. Among all the fine architecture, I found my favorite in the old town, the Stavropoleos Monastery. We passed this building many times because it’s located in the city center and every time I couldn’t help but stand and stare. It’s an Eastern Orthodox monastery that was built in Brâncovenesc (Romanian Renaissance) style. 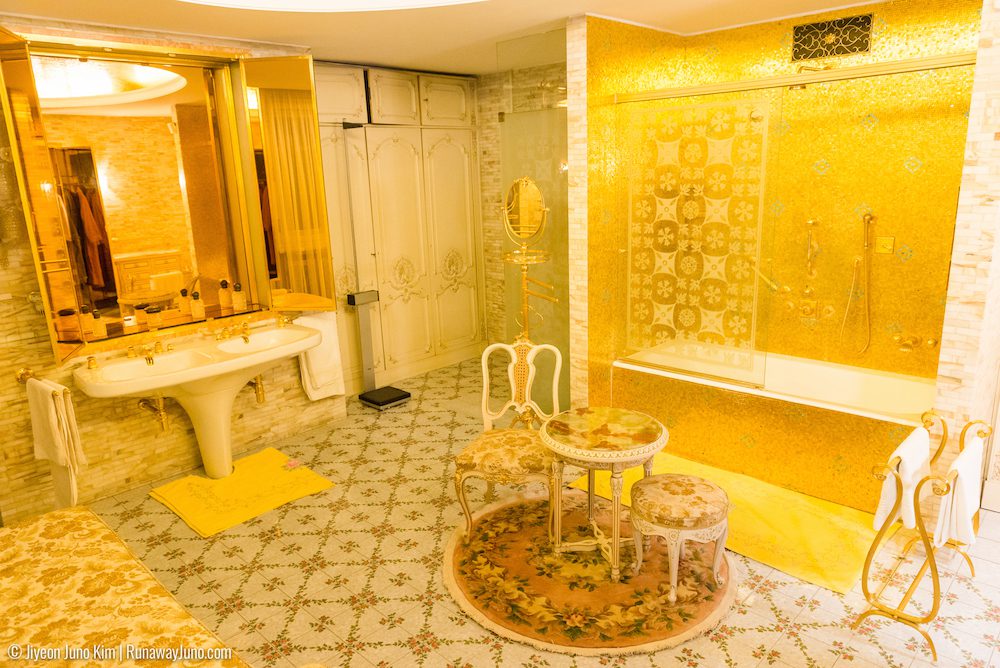 It was the former home of Romanian dictator Nicolae Ceausescu and his wife Elena. They were executed in 1989 after the revolution. For the first time after the execution, Ceausescu’s residence “Spring Palace” is open for visitors to look inside of the life of country’s most notorious leader. Built in the mid-60s, the residence was home during Ceausescu’s dictatorship and was the private residence of the couple and their children, Nicu, Zoe, and Valentin.

The second-largest administrative building in the world stands in Bucharest, Romania. The Palace of Parliament is the most noticeable landmark of the city. The building is composed of 23 sections, it houses the Senate and the Chamber of Deputies, three museums, and an international conference center. The National Museum of Contemporary Art, the Museum of Communist Totalitarianism, and the Museum of the Palace are all hosted inside the Palace. 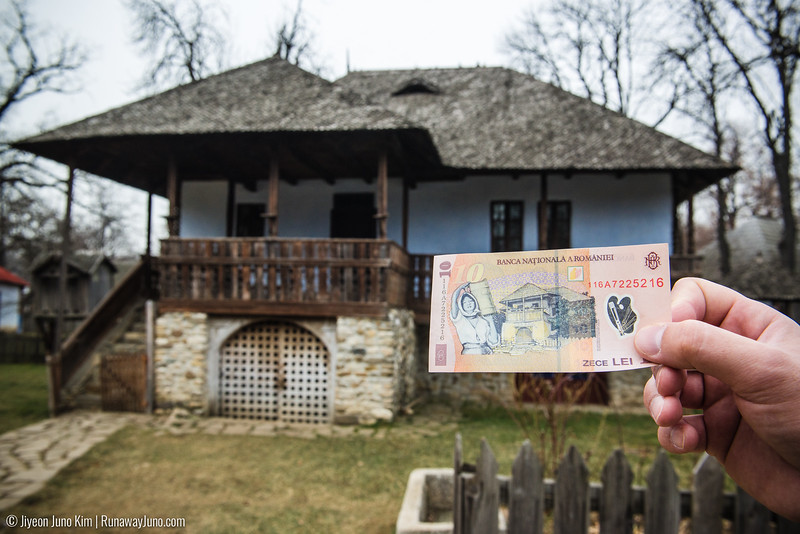 Similar to Skansen in Stockholm, Dimitrie Gusti National Village Museum exhibits Romanian rural architecture. I especially liked the unique architecture from Maramureș region. Here, you can also see the rare house that is featured on the back of the 10 lei banknote, a traditional building from Oltenia.

This beautiful building is Annunciation Church of Saint Anthony. The church is the oldest religious building maintained in its original aspect in Bucharest. The inside is stunning with frescos on the wall and a gold-covered alter.

The Romanian Athenaeum is one of the most beautiful buildings in the city. It’s the main concert hall and home of the “George Enescu” Philharmonic. The acoustics here are outstanding. Go see a concert if you have a chance. It’s very affordable (55-75 lei) and the musical experience is highly recommended.

There are many more things to see, do, and eat in Bucharest other than what I mentioned here. Please see the map and descriptions of more places in Bucharest.

More about Living and Working in Bucharest at