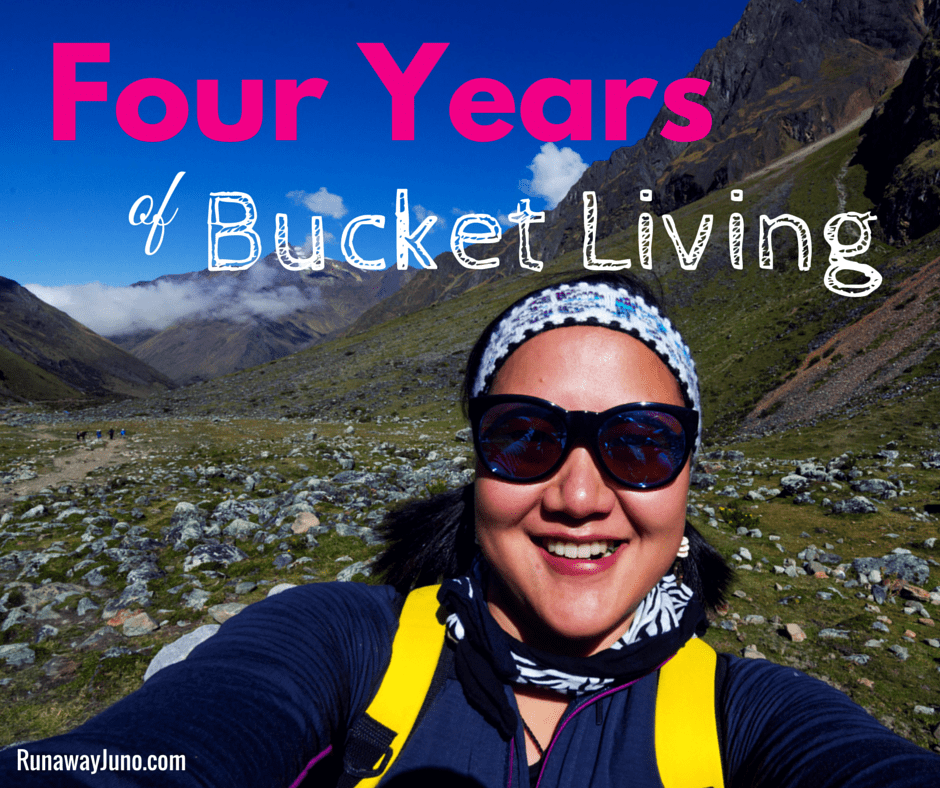 It’s been four years since I spilled my bucket. What’s changed?

I still vividly remember the night when I was on the street under a yellow streetlight, crying. Yes, it wasn’t one of my most typical days. I had just had a huge fight with my parents and stormed out of the house like a teenager. In fact, I’d never done such a thing, even when I was little. A short five weeks later, I packed up my coffee mugs and tchotchkes from my cubicle and left for the US. I said, no more making a bucket list. Let’s spill the bucket! I call this “bucket living”.

It’s been four years since I made that dramatic change to my lifestyle. It feels like only a few weeks ago that I wrote, “Three Years of Bucket Living: Why I Travel” in the Australian Outback. One more year has passed since then. Time goes faster when you’re having fun, right?

I used to be a mechanical engineer at a big firm, and now I’m a self-employed [insert the job description, which would take about five minute to explain]. In another words, I travel the world for a living. The lifestyle is quite different to what Koreans think of as ‘normal’, and certainly I didn’t know much about it before jumping in. I don’t have any regrets about my decision, but I also won’t say that this lifestyle is all unicorns and rainbows. Fluctuating income frustrates me, and I’ve learned the hard way that I wasn’t born to be a nomad. But I still am one. As anything in life, there are ups and downs. However, it is much colorful than my previous life. I would take 50 shades of those colors of joy and agony than of monochrome. So, what’s changed?

My leap of faith brought me to the married life. I met a guy right around this time of change. He has a kind soul, gentle heart, and a beautiful mind who supports and understands me. We share the same enthusiasm about the world, freedom, and travel. Although we come from opposite sides of the world, we share the same values in life. We are also very different people, but that’s what makes it great.

We had a traditional Korean ceremony in Seoul with our friends and family. People often ask me how married life is. In fact, it’s not much different, except I introduce him as my husband and we wear a wedding band. And we are still traveling together.

My family and I, we are okay

The most difficult part of the transition was the relationship with my family. My father was not okay about the whole situation for quite some time. He was living in his bubble, where his daughter was a perfect ‘A’ student and an elite engineer. He was neglecting to see my true colors, and I burst his bubble. I left for the US for three months right after my resignation, and he thought I would go back to work after the “break”. We had another huge argument when I came back from America. Shortly after I came back, I left for my first long-term travel to Asia that lasted 14 months. I think my dad and I talked less than 5 times the whole time I was gone.

Four years later, we are okay. We were never lovey-dovey, but we have always had a strong sense of family. My parents welcomed Stephen into the Kim family with an open heart, and they are more or less supportive of what we do. I’m sure they are counting the days until we have a “real” job, but they are not so much against what we do now anymore. I think we both are realizing that we have limited time together and we want to fill it with love rather than hate.

AWE Community around the world

The Asian Women’s Empowerment organization has been one of my most ambitious projects over the last few years. It was formed to help Asian women who were going through the same situation as me. Being different is not a good quality to have in Asia, even though there are a lot of us out there. I wanted to provide people with a great community where we can feel safe and supported. The first conference was held in Kuala Lumpur, the second one in Kota Kinabalu, and the third one is about to open in Yogyakarta (Jogja), Indonesia.

It’s a difficult project. The conference isn’t easy to organize when I don’t have a lot of capital and support. What keeps me going is the people I’ve met over the years. It was such a moving moment when I saw all the important people in my life getting to know each other. People made friends and some of them became best friends. AWE-ers visit each other’s cities, travel together, and support one another. Many AWE friends flew to Seoul for our wedding. A group of friends joined Stephen’s Peru tour. I’ve gained friends and a community.

Sometimes I wonder if I would have earned my insights about people’s minds if I had never gone through my transition. The conflict between my family was a traumatic experience, but because of that I learned a lot about my parents and how people think and act. For example, my dad appeared to be angry at me, but in fact he was feeling extremely sad for me that I was longing for different values than what was normal in my society. His way of expressing sadness and worry was anger. I have a much better understanding about people now than before. It helps me to be more insightful and understanding. I still have a lot to learn of course, but at least I’ve started to realize it. That’s something.

Surrounded myself with the right kind of people

When I was working in an office, one of my least favorite things about the place was my co-workers. Don’t get me wrong, they were nice and friendly, and I made quite a lot of friends over the years. What I couldn’t stand was their attitude toward happiness and marriage. The company silently requires you to dedicate your life to work, and most people follow. Time off from work was realistically impossible, so they never took a long vacation or had a nice dinner with their family. Everyone’s overworked, tired, and that makes them not look kindly at someone else’s happiness. I’ve shared many stories from my office life over the years.

Happiness comes from within, but also from the energy of your surroundings. It’s easier to seek happiness and confidence when you’re with like-minded people, than a negative and unhappy group. Since I don’t have to be with certain people each day, I can find and create my own tribe.

The last four years have been the best of my life. The most memorable, colorful, and joyous. The community I’ve formed via RunawayJuno.com has been a big part of my life. So, I thank you all.