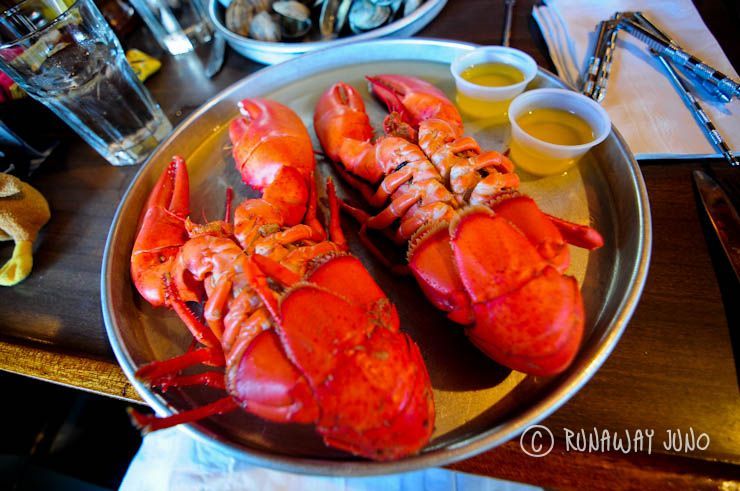 Since I was in Maine, lobster was THE thing that I could not miss out. Lobster here, lobster there… or “lobstaa” as locals call it. I had to do something with the lobster. While five days we were in Maine, everywhere we went was something about lobster. And I had to have a lobster and lobster roll, because apparently this is what people do in Maine. My friend Katie, almost local Mainer, (she writes at Breakaway Katie ) strongly suggested to eat the lobster in Maine, but only with  butter. The day has finally come. The encounter with the lobsters.

In Scarborough, Maine. I finally had my lobster roll at Ken’s Place. We saw lots signs with sale price for lobster roll while driving the coast. Those made me more curious about this food. So, what’s this lobster roll, huh? Lobster rolled with batter that looks like a bun? Or, cooked like a corn dog? Time to find out!

We actually drove back to find Ken’s Place. We were on our way to Portland, Maine, but after few days in Maine, it was about time to have lobster roll.

Basically, it was a lobster sandwich, with a bit of mayonnaise and a piece of lettuce.

I had lobster meat before, but those are specially ‘healthy’. I like to use the word ‘healthy’ when I describe food. Odd, I know, but I like the meaning of it into food. Anyway, so yes, Maine lobster on lobster roll was very good. So, this is lobster roll, huh? Worth of detour! Where? In Kennebunk Port, Maine.

There are many lobster-related restaurants around the whole Maine coast. Frankly we wouldn’t have known where would be the best place to have lobsters. Our friend Amber and George recommended us this place, Nunan’s.

Two lobsters and clam steamer were the choice of the dinner. Look how gorgeous they are! I’m sorry guys…

It was my first encounter with the real lobster, with the shell and everything. They were huge, and they had the big protection. I had my gears, and I was ready to go.

I thought for a moment. Looking back and forth, the gears and the lobsters. But, what can I say, as a Korean girl who’s eaten all kinds of seafood with the bare hand, my instinct told me exactly what to do. No gears necessary. That’s my first impression while I disassemble those guys. They have similar mechanism, internally. Maybe, or maybe not. But It was much easier than I thought. It was a fun process. It was really a crab shapes like shrimp and I’m so very familiar with crabs. And the taste? Oh my gosh! They were so good! Lobster roll was amazing and fresh as it was, but the lobster straight from the pot with a dash of butter… Mmmm…! The tail was a killer.

Fancy, is the word to describe he image of ‘lobster dinner’ as I knew. But not in Maine. It’s just one of the routine what everyone does. But probably it still is a fancy dinner in other cities are not near the coast. So yes, I finally had Maine lobster. It was a memorable moment. My hands smell like seafood for rest of the day, but it was worth it for sure.
Thanks to Stephen of bohemiantraveler.com to take photos of me and my lobsters while I was busy attacking them!