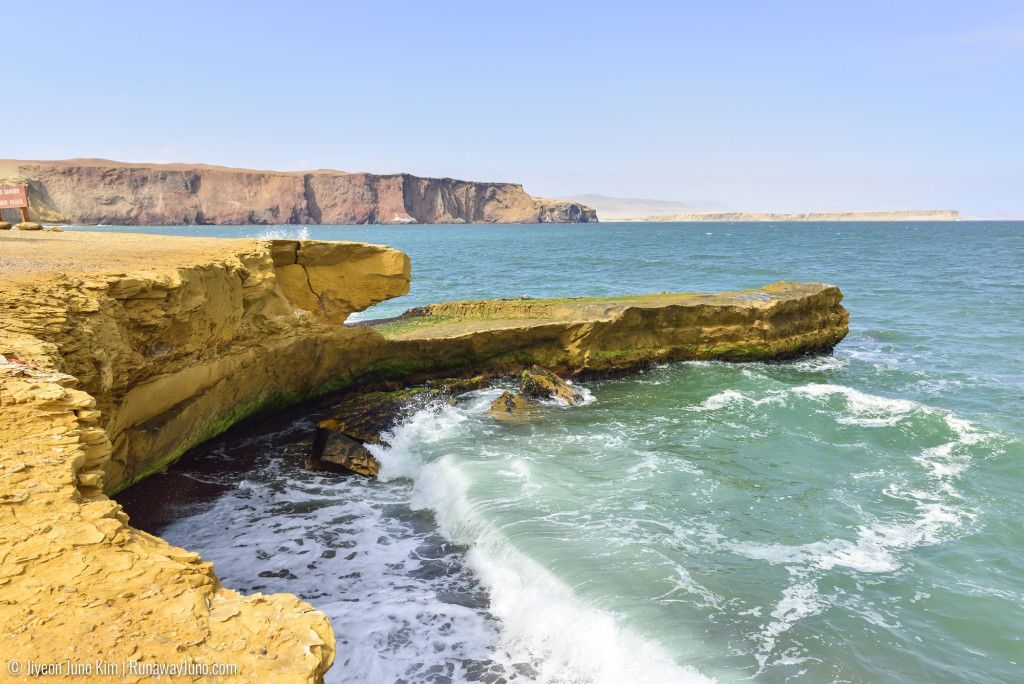 Lima and Cusco, the two pillars of traveling in Peru. Lima, a big city by the Pacific coast is busy but the coastal town’s unique vibe is irresistible. Cusco, the bellybutton of the world, is the gateway to Machu Picchu. But don’t dismiss places in between the two; take your time to travel overland.

After a few days in Lima, we set off to Paracas, another coastal town by the Pacific 260km away from Lima. Paracas is well known for the coastline and wildlife in the nearby islands. It would have been a short trip to Paracas but we took our time. First, before leaving Lima, we went see the big white statue of Jesus. Cristo del Pacifico, “the Christ of the Pacific” is a 37 meter high statue of Jesus erected in 2011. Here you can see the some good views of Lima.

Now off to breakfast! What’s road trip without searching for a great food, right? We stopped at a local artesian baker and restaurant outside of Lima. I don’t usually eat bread for breakfast, but this one was easily one of the best bread I’ve ever tasted. It was fresh baked from the traditional clay oven. There were three choices: regular, cheese, or ham. I can still feel the softness of pan con queso in my mouth. Can the breakfast be any better? Drive to Paracas was uneventful. It was an easy few hour drive. It was late afternoon by the time we arrived in Paracas, and we wanted to catch the sunset near the coast. We rented a taxi to get to Paracas National Reserve for just two hours.

The Paracas National Park (RNP) is one of two Protected Natural Areas (ANP) that preserves samples representing Peru’s coastal marine ecosystems. The Park contains land, a large part of the Paracas desert, islands and the sea. Besides protecting great biological diversity, the Park also contains various archaeological sites from the Paracas pre-Inca culture, which existed in large part of what is now the reserve.

As soon as we drove into the reserve, we could see that the scenery was changing quickly. It was like we just entered a different planet, almost. It was all dry, sandy, yet humid. We drove around the peninsula to find a good spot to watch sunset. It would take a good few hours to explore the place and enjoy dramatic coastlines. There are impressive rock formations, such as the Cathedral, which, while it was badly affected by the earthquake of August 2007, still offers a unique geological landscape. Paracas is also where you can visit the so-called Poor Man’s Galapagos Island, Ballestas Islands. A group of 12 islands off of the coast of Paracas, the Ballestas Islands is one of the highlights of the Pisco region due to it’s easy accessibility, and cheap tour price. Composed of rock formations, these islands are an important sanctuary for marine life. It’s a home to blue-footed booby, Humboldt penguins, sea lions, Inca terns, and more. The $17 tour lasts about two hours. Wildlife encounter is guaranteed.

If you’re looking for a day trip around Lima, put Paracas on your list. If you’re traveling to Cusco overland, don’t forget to drop by and play with the penguins and Inca terns!

#This post is including a link of our partner. The post is based on my experience and opinion, as always.

4 thoughts on “Lima to Paracas, and Pan con Queso”