When we reached to Kuala Lumpur, we saw an informative commercial about religious event is going to be held a place called Batu Cave.

Apparently this event was masochistic looking devotees. I was not sure I can handle the masochistic-looking pressure, but anyway this actual event is a week later but I wasn’t planning stay that long in Kuala Lumpur so we just decided visit there.  (We mean Jenny and me. I met Jenny at Singapore and we traveled together through Malaysia.)

One sunny day, one of those day in Malaysia, we took a bus to Batu Cave. Batu cave is about 15 km away from city central.

Humongous god and countless stairs were greeting us. I’ve heard that countless stairs are part of their training. Bare the pain and train your mind. Turns out there are 272 steps. Okay, not bad as it looks. Every step has number. I was not sure it helps you or not. I think this is a ‘half-full or half-empty’ situation. Oh- wait! I get it. Am I supposed to think as ‘half-full’? Thank god only 150 stairs left! I think this is a part of training.

We started walking. In few pictures I’ve taken I can see how much pain I was in.

2. I can see my nostrils were dilated from those pictures.

Finally we were on top. The view was phenomenal. All the Hindi decorations and the view of Kuala Lumpur.

Inside of Batu Cave was more exciting.

All the devotion was really touching. I’m consider myself as a not much of a religious person, but I think we all have some level of religious side. Because I’ve read many blogs touched by temples or churches, and myself touched by many religious places. Or touched by people who made them? Maybe.

Besides of religious statues, this wonder of nature was marvellous. It is a cave but not entirely. Word cave bring up the image of dark hall middle of some mountain but Batu Cave wasn’t. It is just a space between rocks. Look at the rocks and grasses, most of them were mosses but it was so beautiful. Whoever founded this place picked the just right spot. It feels much more mysterious with vibe from mountain. 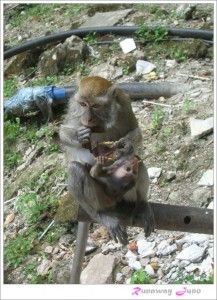 Moreover I can’t leave out monkeys! It was really bizarre look this many monkeys at the same time. I didn’t get to see this many, and this various size of monkeys even at a zoo. Every bump on those huge rocks there’s monkey. Some mom monkeys put their child into their pockets like kangaroo! I didn’t know monkey have a pocket. Or many it’s just their belly and I saw it wrong.. maybe? My good blogger friend Ciki introduces her blog as related to monkeys and I totally get it.

I didn’t catch the masochistic devotee’s event, but Jenny did. She told me how it was after, and she said it was really cool. I only saw it through pictures. It was much beyond as I imagine.

If you are planning to visit Kuala Lumpur, consider count Batu Cave in your itinerary.

14 thoughts on “Half-full or Half-empty? Hidden philosophy in Batu Cave”