Look at the “Cool” Ice Sculptures at Ice Alaska in Fairbanks

Fairbanks is known as the world-famous northern lights viewing destination. It has a rich gold rush history and often called Golden Heart City. Visitors travel to Fairbanks to experience Midnight Sun. But that’s not all you can find here just like I “traveled around the world” in Fairbanks, Alaska.

Any fans of antique automobiles and Roaring Twenties fashion style?

Then Fountainhead Antique Auto Museum is the place to go. Ok, picture this. Let’s travel back to the early 19th century in America. Think of American engineering and innovation. Automobiles started running on the streets. People traveled miles to look and take a photo with the new invention. It cost as much as a house or more at that time. There were as many carmakers back then as there are social media channels now. And of course, think of the hats and functioning yet enchanting dresses.

We met Willy, the manager of the museum, working on a few different antique vehicles in his garage next to the exhibit hall. He represents the soul and spirits of this museum. He lives and breathes antique cars. He talks about the cars with such affection and with deep knowledge. I really didn’t know that there were this many carmakers in the US back in the day. I wondered what would the world look like if all the carmakers survived to this day. Would we have more stylish cars like in the olden days? The range of the car collection begins in 1898 with Hay Motor Vehicle and continues up to our 1936 Packard 1408 series dual windshield Phaeton. Many other rare automobiles are included, like the only 1906 Compound, a 1920 Argonne, and a 1921 Heine-Velox Victoria.

These automobiles are not just sitting pretty. All but three of the museum’s cars are operable and many get driven on a regular basis. Willy works on the cars regularly and those cars are out and about. No wonder all the cars were so shiny not only the outside but the inside. You can see video footage of the cars running behind the museum.

What were my favorite cars in the museum? This. 1926 Fordson Snowmotor. It looks like something you see in a sci-fi movie, doesn’t it? I would like to see one of these machines roaming around on a heavy snow day. They actually took out this machine a few days after I left town and I was so bummed to miss that scene.

The Roaring Twenties. I was very interested in clothing. Did you know there were “driving dresses” back in the day? The dresses, hats, and accessories make the exhibit more exciting. It helps you actually picture the era. Like in a movie; a couple in a beautiful car with an open-top, woman’s scarf, and fringes of the dress floating back as the car runs. Did you know, people used to use real beetle wings to decorate their dresses? It’s really shiny and pretty. I was enchanted by the clothing so much that I purchased one of the stylish hats from the gift shop. It came useful when I had to dress up as a 1920s traveler for a theme Zoom party.

The museum also highlights the automobile history in Alaska. To this day we have less than 10 major highways in the entire state, so the history of driving is unique here. Look at the very first car in Alaska hand-built by Bobby Sheldon. Young Robert “Bobby” Sheldon built Alaska’s first automobile in 1905 to “dazzle a young lady in Skagway, Alaska.” Although he had never seen an automobile before, Bobby Sheldon assembled buggy wheels, a marine engine, some tin, and two bar stools into a functional runabout that could travel 15 miles per hour. He wasn’t entirely successful with his endeavor but he did leave us with this legacy.

Even traveling to the neighboring city, there are something new to find. It’s been more than a year without travel but I’ve been enjoying these little discoveries. Next time in Fairbanks, make sure to check out Fountainhead Antique Auto Museum! 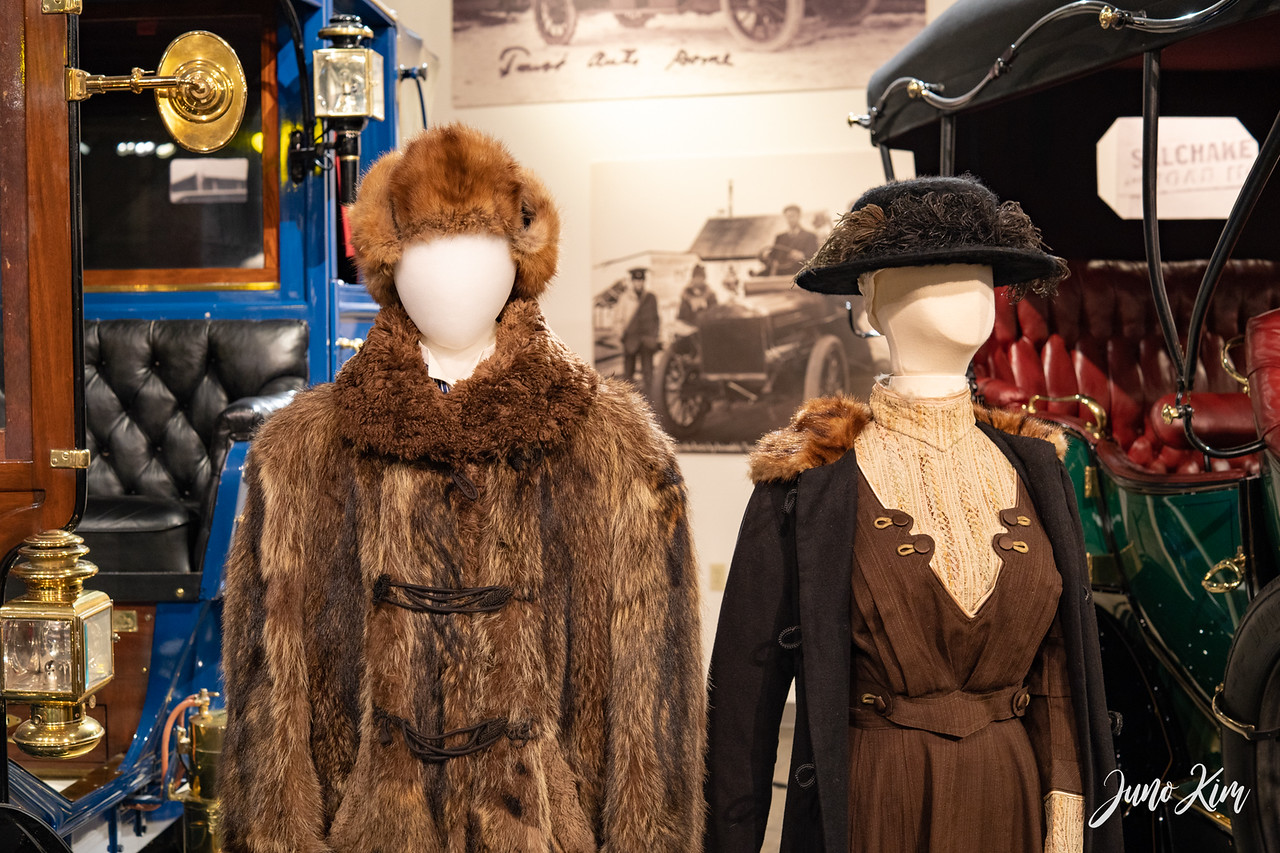