We love Italian wine. We love Italian food. We love Italy. But Italian wine is one of the most difficult regions to learn due to the variety. There are more than 300 official wine variety, and some say there are even more grape kinds exist. Italy has many exquisite wine regions, here are five road trip suggestions to visit the most significant places according to the volume of DOC (quality assurance label for Italian wine, meaning controlled designation of origin) wine and popularity.

Wine tastes better under the Tuscan sun. Located in central Italy along the Tyrrhenian coast, Tuscany is home to some of the world’s most notable wine regions, including Chianti which is the most famous for Sangiovese. Sangiovese performs better when it receives more direct sunlight, which is a benefit of the many hillside wineries in Tuscany. Tuscany is Italy’s third most planted region, but it is eighth in production volume due to the poor quality soil and most of the producers are focusing on higher quality level wines. More than 80% of the production is in red wine.

When Sangiovese became the major grape in Chianti region, the other grapes including Merlot and Cabernet Sauvignon created a new style of wine called Super Tuscan, which is a “Bordeaux-blend”. It’s an unofficial category of Tuscan wines. Cabernet Sauvignon and Merlot are typical grapes for Bordeaux, but the climate in Tuscany has proven to be very good for these grapes. 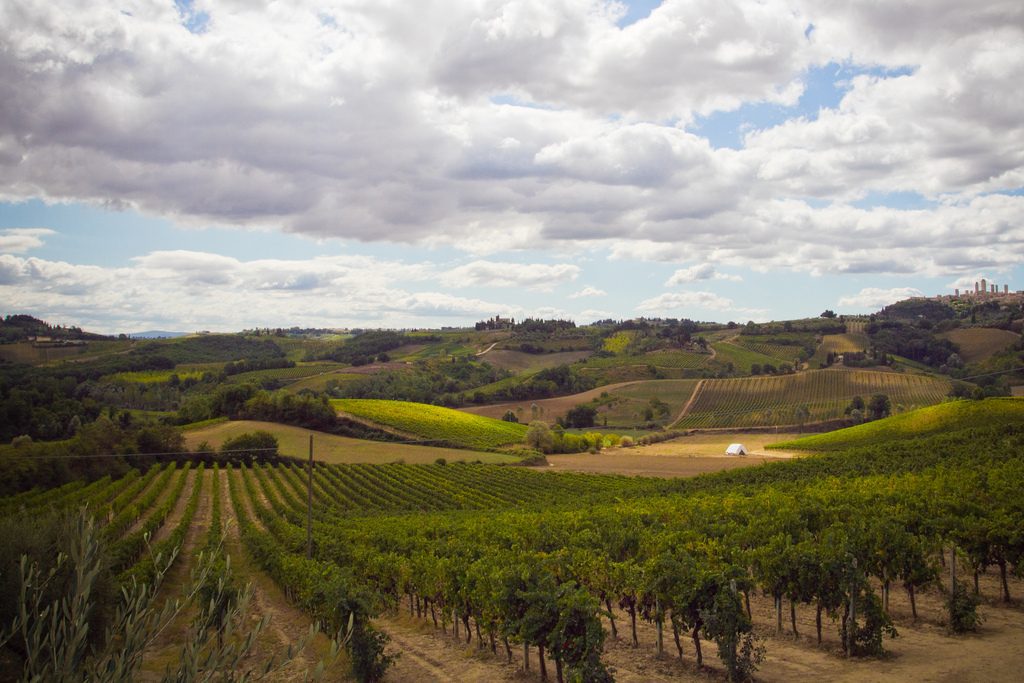 Having a glass of sweet Italian sparkling wine? You might be drinking Moscato d’Asti from Piedmont. The province of Piedmont in the northwestern corner of Italy is best known for Nebbiolo and Moscato grapes. Barolo and Barbaresco which are made from the Nebbiolo grape are ideal for storage. A well-aged bottle of Barolo is known for the smooth taste because the tannins are polished and integrated into the wine. The wine becomes more rusty-brown color as it ages. The sparkling wine Asti spumante is made from the Moscato grape. The wines are known for their light bodies, low alcohol content, and sweet taste. The Barbera grape is also popular in Piedmont as it makes a muscular red wine without much tannic taste.

Archaeological evidence suggest that the settlers from Athens, Greece started the winemaking tradition along the Po river. They traded wind with the Etruscans in Tuscany. From the Valtellina region in Alps to the north, and Oltrepo Pavese near the Po river, Lombardy produces diverse wine due to the diverse terrain and cool continental climate. The vineyards in Valtellina are located in 2,500 feet. Major grape is Nebbiolo. The nearby mountain peaks provide protection from cold wind and help trap heat in the valley. The wines are typically medium bodied and have less tannic and acidic taste than Piedmont’s. Lombardy also produces some great Pinot Noir especially in Oltrepò Pavese region. It produces more than the half of all wine from the Lombardy region. The sparkling wine is called Franciacorta and is made with Pinot Noir, Chardonnay and Pinot Blanc grapes in the same style as Champagne.

Veneto is a wine region in north-eastern Italy, one of a group of three highly productive Italian regions known collectively as the Tre Venezie. The Veneto is the biggest DOC producer. Although Tre Venezie produces more red then white, Veneto produces more white under DOC. It’s a home the famous Prosecco, that’s made in the eastern part close to the Venice Lagoon. Another famous white while called Soave is made near the city of Verona, which taste like Chardonnay but richer. The climate of the Soave region is influenced by the mists that flow from the Po Valley.

#This post is made possible by a media partnership. All the opinions are my own.