Train Trip is about Journey – Eurail Adventure to Prague 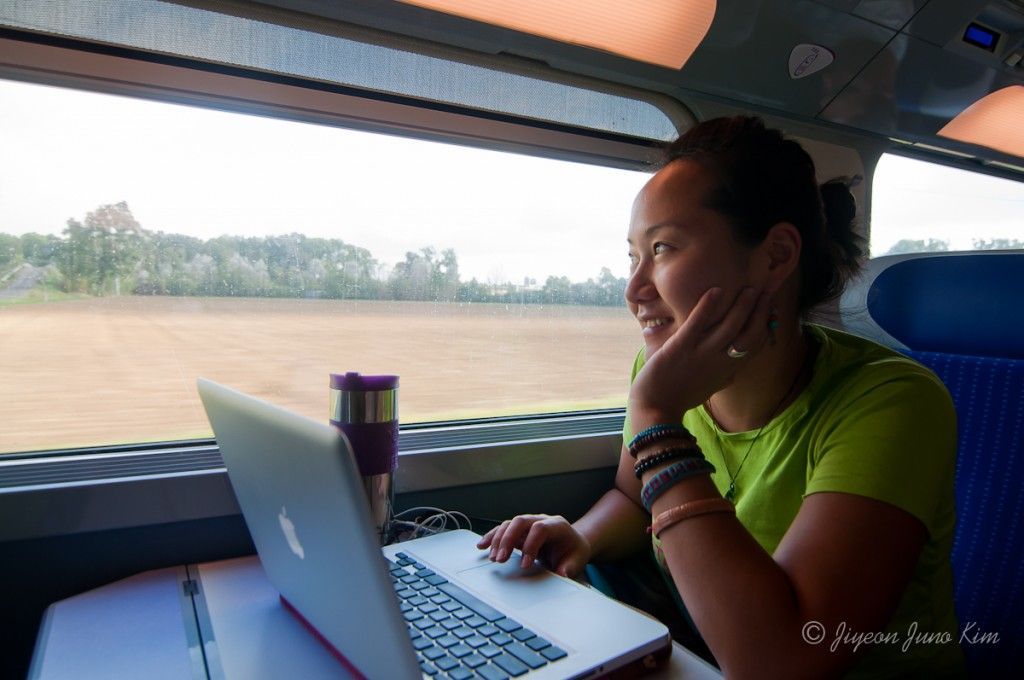 The longest way to Prague

We were just a few hours away from Prague, the city I was longing to visit for so many years. The logical move would be just hop in the train and make my dream come true. But we didn’t; we decided to make the trip more interesting.

We were at Olomouc, the second most historic place in Czech Republic. For your information, it is a not-to-miss place to visit before or after Prague. The astronomical clock has an interesting historic background, and worth checking out. The locals call Olomouc ‘better Prague’. After a few days in Olomouc, it was time to finally visit Prague. And we choose to make the trip more interesting using our Eurail Global Pass. The advantage of using the pass is that we can use as many as trains we want as long as it’s only one day. We had 15 days of Global Pass, and we wanted to make the best out of this one day. Instead of heading straight to Prague, we each detoured the route by visiting two different destinations: Vienna, Austria for me, Bratislava, Slovakia for Stephen. We each had two or three hours of layover in each city and reunited in Prague at the end of the day. I choose to go Vienna because of my interest toward Art Nouveau architecture. In Riga, Latvia I first got to know the details about this particular architecture, and I was wondering how it would be different in other parts of the world.

What did I do?

To make the best out of our limited time, we set seven goals to achieve in our destinations.

1) The view from the train

3) Photo of the most famous landmark

6) Photo of the city’s character

7) Photo of something funny

I’ll get to the result at the end of this post.

My goal was to get into the city and see a few attractions and get right back on the train. Though, it didn’t go very well as I thought it would be. First trouble was to put my big bag into the coin operated locker. It was 3 euros for the big compartment, and I had no idea how to use the locker. By the kind help of a couple I was able to lock the bag, and worried what if I can’t get the bag later because I do something wrong. Sometimes life is so much easier with an analog method. Next, I had a hard time going into the city. Because the train station was the transportation hub, obviously, there were many trams and streetcar tracks and I couldn’t find the right one. First, I took the right tram but to a wrong direction, and came right back to where I started after I realized I was going further from the city center. I finally got back on the right tram and headed to the city center.

The city information center told me to get off at Kalsplatz and walk into the city was the easiest way, so I did. But I got off at the wrong station or walked toward the wrong way, again. I ended up walking all the way to St. Stephen’s cathedral. It was way more than I planned, but good chance to see the attractions and Art Nouveau architecture.

Finally, I reached Kärntner Straße. The first record of Kärntner Straße is from 1257, as Strata Carintianorum, which refers to its importance as a trade route to the southern province of Carinthia. This street continues to Stephansplatz. I was at the right place. While feeling joyful, I was shocked by how many tourists were congested here in this street and the square. The whole time I was walking I only ran into a few tourists in the street and passing through quiet streets. After all, Vienna is a famous tourists attraction.

As soon as I arrived at Stephansplatz, I pulled out my notepad and started clearing out the list. I wasted (in some way) so much time walking already, I had to move fast! I did my best.

1) The view from the train

If I’m having a cup of coffee for 4 euros, at least I have to have a great view. So I did – the view of St. Stephen’s Cathedral. Cheers to that. 3) Picture of the most famous landmark

Obviously, St. Stephen’s Cathedral was one of the most famous landsmark of the city. It is  Romanesque and Gothic form, situated at the heart of Vienna, Austria in the Stephansplatz. As the most important religious building in Austria’s capital, the cathedral has borne witness to many important events of the nation. The mosaic roof became one of the city’s most recognizable symbol.

Because of the unfortunate incident of walking, I didn’t have any time to sit down and eat. I looked around and found out a lot of people were eating Ice-cream. And now I think about it that was because most of the people around me weren’t locals, but oh well. I bought a postcard for 30 cents, but failed to find a post office. First I asked the information center but I couldn’t find it at the place she told me. I went back to the information center again to ask. Let me just say, she wan’t really helpful or understanding that I wasn’t familiar with the city. So at the end, I had to get on the train with the empty postcard. I hoped Stephen couldn’t do it either because I failed the misson, but at the same time I hoped he succeed it – because I love getting postcards!

6) Photo of the city’s character

It was hard to see the character when you are surrounded by travelers, not the people who live there. And I found one very similar behaviors from everyone around me; taking pictures of the Cathedral. When you are in Vienna, you’ll see a lot of photographers and you’ll be one of them.

7) Photo of something funny

I would not talk to the advertisers for this long, but I did because I had to take his picture. In the city of Mozart, it was not hard to run into one. Basically they want to sell me a concert ticket but their opening line was all same ‘Do you have a boyfriend?’ If you say yes, they will continue going on about how wrongful your boyfriend is to not be here with you. Well at the end of the long and painful conversation, I got this picture. Not a bad job. After all the missions, I went back to Wien Meidling by metro (I wasn’t going to repeat the mistake), successfully got my bag and got on the train. It was rather smoother. Because of all the walking and panicing about my continuous mistakes (yeah, I was a little), on the way to Prague felt like the longest. When I got into Prague and successfully connected to one random Wi-Fi signal at the station I got a message from Stephen. He was at the hostel we were supposed to meet, but apparently finding the place wasn’t very easy. Unfortunately the hostel was quite far away from the city center. When I look at the clock after we got in the room finally, it was almost 11pm. Ah, the longest way to Prague alright.

Even though there was a handful of misadventures, I’m glad we choose to do this challenge. Train is the best way to travel Europe, and sometimes choosing the scenic route instead of the fastest route leaves stronger memories.

To see how Stephen’s trip to Bratislava went, read the blog post by clicking the link below:

A Stop in Bratislava on the way to Prague

What do you think? Which city would you rather go: Vienna or Bratislava?

#Disclosure: Project Runaway Europe was sponsored by Eurail.com‘s Global Pass. However, all the opinions and challenge ideas are reflecting my own, not Eurail’s.