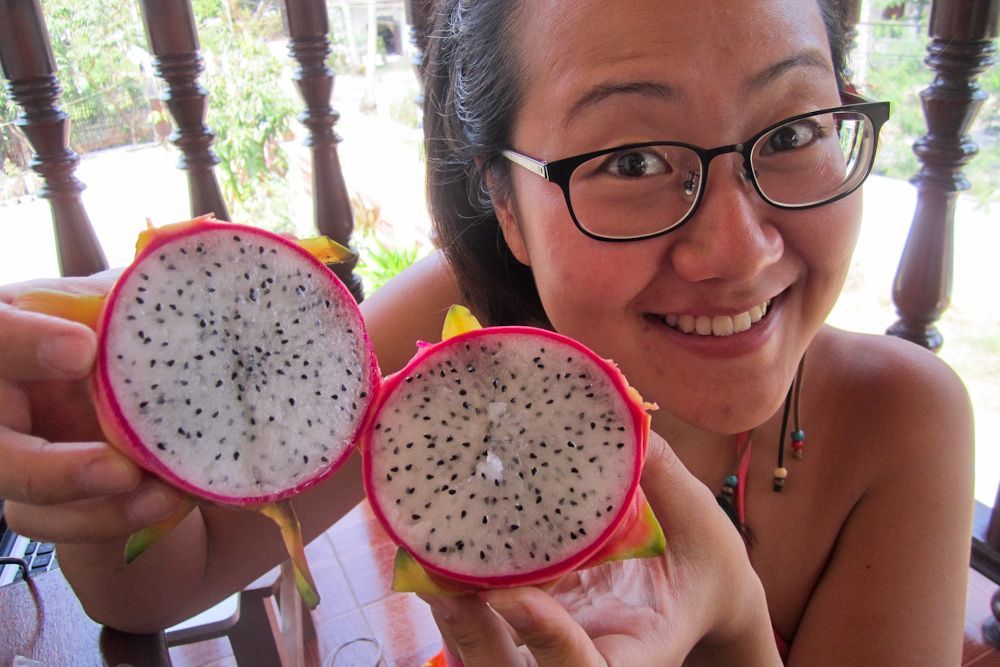 One of the best things about being in a tropical country is their fruit. How can I resist having mango, mangosteen, and papaya everyday? It is more desirable because I couldn’t get them in my home country; where there are four significant seasons. And of course, they are sweet and juicy, sour and tasty. Under the tropical sunshine, they become as sweet as they can be.

While I was traveling in Laos, I had many of these fruits in many different forms; juice, shake, salad, but have it as they are is the best way.

I want to introduce some of the tropical fruits you can find in Laos, and how to eat them.

I found Southeast Asian Bananas are more meaty than the one I had before. I like the ones from Southeast Asia region – fat and short, that I called Monkey Bananas.

They are native to tropical South and Southeast Asia, and are likely to have been first domesticated in Papua New Guinea. Today, they are cultivated throughout the tropics. They are grown in at least 107 countries, primarily for their fruit, and to a lesser extent to make fiber, banana wine and as ornamental plants. Native to Mexico, Central America and South America. Currently they are cultivated in East Asia and Southeast Asia countries. Also can be found in Hawaii, Israel, northern Australia and Southern China.

The texture of dragon fruit is sometimes likened to that of the kiwifruits due to the presene of black, crunchy seeds. The flesh is mildly sweet and has very low calaries.

Originally from southern Mexico, Central America and northern South America. However it cultivated in most tropical countries. Two kind of papayas are commonly grown; the one with sweet and red flesh and the one with yellow flesh. It feels soft when it’s ripe, as soft as avocado.

Mangoes have been first cultivated in South Asia for thousands of years and reached Southeast and East Asia between the fifth and fourth centries BC. Now is in most of frost-free tropical climates; more than a third of the world’s mangoes are cultivated in India alone, with the second being China. Other cultivators include North, South and Central America, the Caribbean, Africa, Australia, China, Pakistan, Bangladesh and Southeast Asia.

Is is believed to have originated in the Sunda Island and the Moluccas of Indonesia. The fruit is sweet and tangy, juicy, and fibrous with an inedible, deep reddish purple-coloured rind when ripe.

It has a history of use in folk medicine, mostly in Southeast Asia. In is reputed to have possible anti-inflammatory properties, and may have been used to treat skin infections or wounds, dysentery or urinary infections.