Fountain of Wealth : It’s More than just the Size.

Have you ever through coin into fountain, praying for something to happen?

Superstitions, it seems so silly sometimes but time to time we would like to lean on something bigger. No matter how many people think that is a stupid thing, one little wish won’t hurt, right?

I ran into one giant wishing well in Singapore. One different thing is that you don’t through coins in here. There’s another way of wishing in this fountain.

And… I think Singaporeans are really into ‘the world’s best..’ stuff. I guess..

A lot of places were closed due to Chinese New Year holiday. I went to look around the city, when I stepped into Suntec city, I ran into this gigantic fountain, Fountain of Wealth. It is the world’s largest fountain for starters and more. The design of Suntec city is based on World’s largest element formation. That is quite fascinating. Have you heard about feng shui? It is a well known geometric philosophy in Korea from the old days, so actually many important places for example the palace for the king is located based on feng shui. This is someway similar like that.

The world’s largest element, which are wood, metal, fire, earth, and water. Wood is the towers, metal is the gigantic ring surrounding the fountain, earth is tower five, fire is the Suntec fire centre, and of course water is the fountain. Because of the formation this fountain considered as ‘lucky’ water. They indicated Suntec city as “an exceptional piece of feung shui sanctuary”.

It is all very fascinating. I am familiar with the concept but I’ve never seen this complicated and obvious design. This is very modern city centre and also very old fashion.

There was an instruction how to touch the water for good luck. You don’t just touch it. In Eastern philosophy, clock wise direction is for positive chi and counter clock wise is for negative chi. Therefore you have to go clock wise with your hand touching the water. 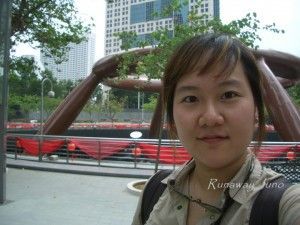 Am I a rich? Well, I don’t think so but it’s grateful to learn another great thing about the world. ‘Fountain of wealth’ is another great point of Singapore’s cultural landmark. Singapore usually not considered as a cultural challenging destination because it’s very westernized already. I felt that when I was there but at the same time they still have their own way of living and great cultural landmarks like Fountain of wealth. You can make the biggest fountain anywhere in the world but not with this cultural philosophy in it. This is what I like about Singapore.

Anyway, I’m still looking forward to being a rich since I touch the lucky water. Hm.. maybe I already am. Since I am having this enriched life with the world right now. So it worked after all.

4 thoughts on “Fountain of Wealth : It’s More than just the Size.”