10 Things to Do in Seoul on a Budget

Besides “Gangnam Style”, what do you know about Seoul? My hometown, one of the biggest cities in the world that expands over 600 years, Seoul is becoming a popular destination for world travelers. The capital city of South Korea may not on a list of the most beautiful cities, but it has a lot to offer. Here, I introduce you 10 great things to do in Seoul on a budget.

History lives and breathes in the nation’s capital city. To experience the lifestyle of the yesteryear, start with Gyungbokgung (Gyungbok Palace), Seoul’s principal Palace. This main palace was built in 16th century during Josun Dynasty but ruined by Japanese invasion and renewed in the 19th century. A few times a day, the palace hosts various historical performances, such as changing of the guard and opening and closing of the palace gate. There’s also traditional Korean musical instruments and the actual outfits they used to wear in the old days.

You’ve experienced the royal life of the 16th century, and now it’s time to see the life of the common folks. Just beside Gyeongbok Palace is the greatest museum in the country (in my opinion), The National Folk Museum of Korea. It’s a great way to learn how the people have been living in Korea. The reason I love this museum so much is because it’s very hands-on. Somewhere in the museum, there are actual houses you can sit, traditional clothes to wear, and musical instruments to play.

My another favorite museum, also free of charge, is King Sejong Story located underneath of the king’s statue in Gwanghwamun Square. It’s right outside of Gwanghwamun Gate of Gyeongbokgung. He was one of the most respected kings of Korea, who was responsible for creating Korean language, Hangeul.

If you want to explore more palaces, there are many others around this area. Changdeokgung Palace, Deoksugung Palace, Jongmyo, and Changgyeongung Palace are some of the popular ones. All these palaces have different history and architecture.

Down the main street, find an entrance to the famous Insadong, a major historical tourist spot. Have a cup of traditional tea, eat Korean food, or simply just walk around and feel the history.

If I pick one thing that I’m the proudest of my city, that would be the transportation system. Ironically, it ruined me for life as a traveler! You can go just about anywhere using the public transport in the city. It starts from the airport. Airport Express brings you to the center of the city in an hour (43 minutes by express train) with only 4,150won (8,000won for the express train). Airport Limousine Bus is also another convenient way to get to various destinations in Seoul or another city without transferring.

Seoul’s metro, buses, town buses, and long-distance buses are clean, cheap, and efficient. Seoul Metro and bus systems are very well interconnected, the transit card even provides huge discounts when you transfer one to another. Each metro line provides a tourist map with all the attractions listed in their line. Tour of Seoul starts and ends with public transport. 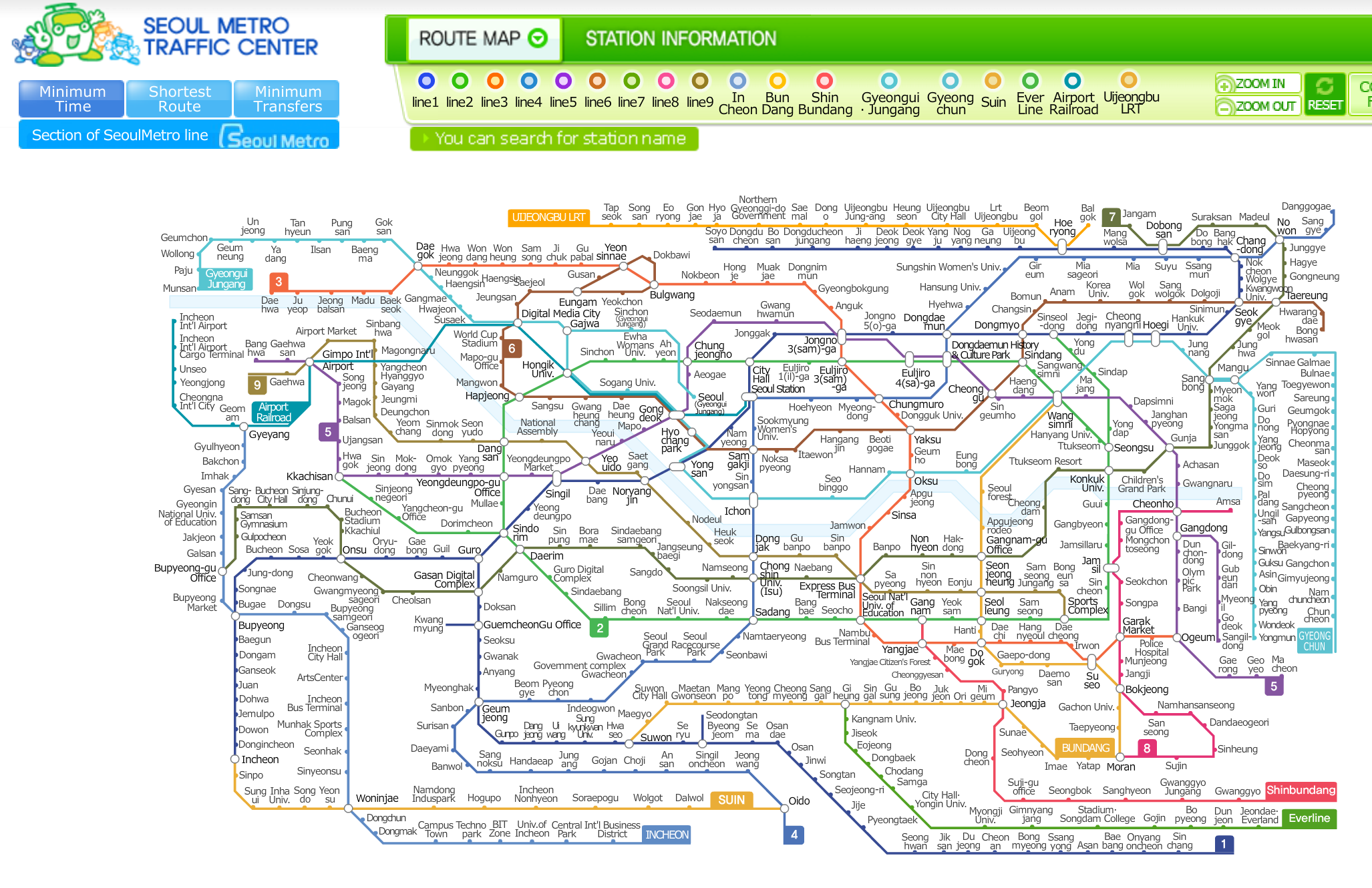 Into a bit of nature

Seoul is one of the biggest cities in the world. However, it doesn’t mean that it’s all filled with concretes. Han River crosses the middle of the city, and both sides of the river are preserved as parks with cycling tracks, grass fields, and trees. Haneul Park near World cup stadium, Yongsan Park, Citizen Park, Namsan Park, and so on, there are many places to get into nature.

In the recent years, Seoul restored some of the major natural sites, such as Cheonggyecheon Stream. It became a place for families, venue for various events, and provides a bit of nature for its citizens.

Food is the center of life in Korea, and it’s an understatement. You just can’t talk about Korea without culinary culture. I’ve travel many places in the world, but still Korea has the most diverse, creative, healthy, and loving food. How can food be loving? Well, you just have to experience it. There’s no shortage of Korean food restaurants in the city, and the street food stalls are also worth trying.

Korea has strong musical and performing culture that’s been living with the people over the centuries. Korea House presents one of the best performances in Korea. Partnering with Korea Cultural Heritage Foundation, the performance brings Korea’s best classical novel “The Story of Sim Cheong” into life. Korea House is also a popular venue for Korean traditional wedding ceremony. You might be able to catch one if you are lucky! What is Korean traditional wedding ceremony, you ask? See my Complete Guide to Korean Wedding Ceremony.

If you want to experience modern theater culture of Seoul, which I strongly recommend, head to Daehakro. It’s sort of the Broadway of Seoul. Musicals, plays, comedy shows, concerts, and movies, there are just about everything for everyone. As a musical fan, I visited Daehakro regularly for past two decades, and I have to say, it’s one of my favorite places to recommend to visitors. Most theaters here are small, so you’ll have an intimate relationship with the actors.

For music fans, there are many live music bars in many areas, especially in Hongdae. Sometimes bands are just playing in the park or streets.

Go for a hike

One of the biggest misconceptions about Seoul is that it is a concrete jungle. Granted, it’s one of the biggest cities in the world. But you’ll be surprised looking at the map. There are 13 major mountains within the city limits and countless hills in many neighborhoods.

Bukhansan National Park is an ecological island inside Seoul and a spiritually important mountain for locals.The best part of this park is that it’s accessible from anywhere in the city by public transportation. Bukhansan National Park is divided into two areas with Uiryeong Pass in the middle: Bukhansan Mountain to the south, and Dobongsan Mountain to the north. Bukhansan has dozens of gorges and granite peaks, creating beautiful harmony within nature. There are also many historic sites within the park, such as Bukhansanseong Fortress with over 2,000 years of history. You’ll also run into a few Buddhist temples while hiking here.

There are many peaks in the park that provide panoramic views of the city, but that’s not the only way to enjoy this mountain. Seoul City created ‘Bukhansan Dulleagil’, a walking path that goes around the base of the mountain. With a total distance of 71.5km, it’s divided into 21 courses with different themes. The path leads both into nearby neighborhoods and folds of the forest-covered mountain. It is a relaxing way to experience the city from a different point of view.

Traditional markets are a big part of Korean life. I grew up near Ahyeon sijang (market), still buying things from these vendors feels like real shopping to me. Traditional markets are better for buying food and even souvenirs. Friendly haggling is the key to shop in traditional markets. There are many friendly local markets in every pocket of the city, but there are more tourist-friendly markets. Namdaemun Market, the biggest market in Seoul is where you can see customers haggling for the best price. “Give one for free if I buy two” is the usual line you can use. The concept of 2 for 1 is born in traditional Korean markets I’d say.

If you’re looking for souvenirs, Insadong is the most famous street for visitors, but today forget Insadong! Gwangjang Sijang, which is just four blocks away, is one of the biggest and oldest traditional markets in Seoul. Originally named Dongdaemun Sijang in 1905, it was the first permanent traditional market to be opened everyday of the week. Gwangjang Sijang is famous to tailor made hanbok(Korean traditional dress) for the locals. For visitors, souvenir shopping and eateries are the two most important reasons to visit. Souvenirs come in all shapes and colors. Traditionally, Koreans love using colors in their daily life. When you see hanbok, for both men and women, they are made with all shades of colors. That’s why Korean wedding photos are like looking at a dancing rainbow. From colorful tote bags to wallets, from coaster to hand mirrors, there are more than enough things to commemorate your time in Korea.

For fashion shoppers, check out Hongdae and Sinchon for boutique shops. For more serious shoppers, I recommend visiting Dongdaemun Market at night.

Look for a view

The Seoul N Tower, an iconic landmark located at the top of Namsan (Mt. Nam), provides one of the best views. Take a cable car from Myeongdong Station (Subway Line 4), take a shuttle bus, or walk to the tower. The trail is surrounded by beautiful trees (remember when I said Seoul is nature-friendly?) and there are several attractions on the way to the top. From here, the view of the city spread out below the mountain. Han River creates a dramatic landscape with skyscrapers on both sides. It’s even more spectacular in the evening.

Another good spot is on the top of the 63 building in Yeouido. When I was growing up, my family went to Han River Park quite often and I would count floors every time I saw this building. There’s a viewing deck on the top of the building.

Seoul is growing into the more global city each year. Now the city hosts various events throughout the year. Festivals are a great way to experience the city in a different way, for free most of the times. Hi Seoul Festival, Seoul Jazz Festival, International Women’s Film Festival, Seoul World DJ festival, and many more are happening! Seoul even celebrates St.Patrick’s day. I couldn’t have imagined this to be happening in my city when I was little.

Most festivals are free of charge. Check information before you visit Seoul: Korea Tourism Organization. 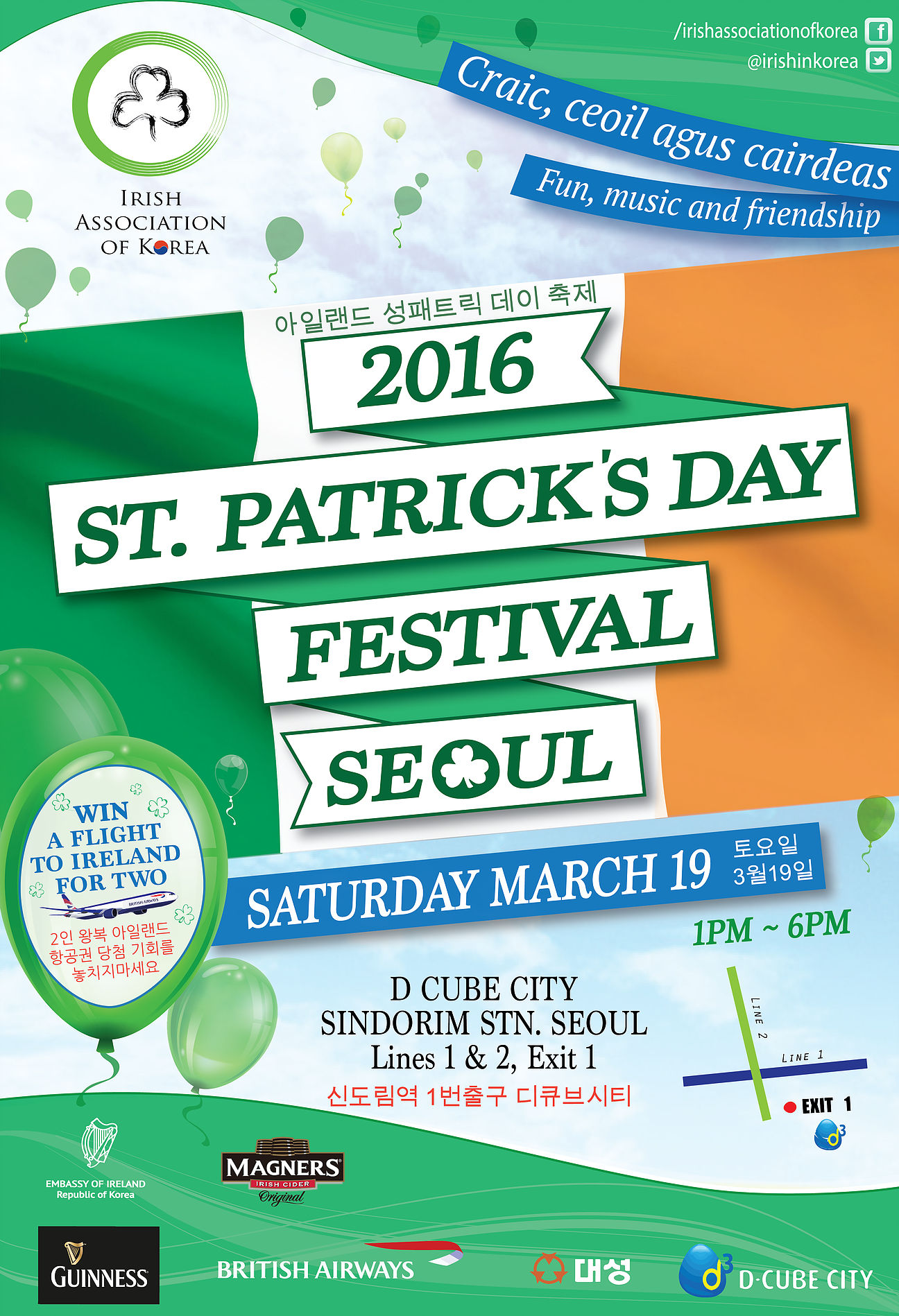 People say New York City is the city that doesn’t sleep. For me, that’s Seoul. There are plenty of places to enjoy the night scenery of the city, such as Han River bridges, Cheonggyecheon, and Seoul N Tower. All are lit up at night with beautiful and classy colors. Even if you visited these places during the day, the atmosphere completely changes in the evening.

There is also no shortage of 24-hour open bars, restaurants, convent stores, and coffee shops in every corner of the city. Hongdae, Sinchon, and Gangnam are some of the popular places for nightlife. Metro ends at 1am and starts at 5am, but taxi runs all night.