UNESCO designated the fortress a World heritage site in 1997. You can imagine why Suwon fortress is one of must see place in Korea.

Hwasung is quite special because the way it built. An architect in Choseon dynasty, Jeong Yakyong develops ‘Gujunggi’, which works with muti-pulley for pile the big bricks. That is why Suwon Fortress looks so neat! This is one of the best inventions.

Like any other world heritages, Hwasunghas whole lot of stories behind, but besides all that this is really beautiful. The best preserved ruin in Korea.

Meaghan, Ian and I head to Suwon for Hwasung. Ian was the one in my ‘the most generous restaurant in the world’ article.

Weather was great. Beautiful sunshine with us the whole time.

I used to live in Suwonfor University, so I looked around Hwasung several times but it always fascinated me.

We got out of but just in front of Jang An mun (North Gate). We went in and started to work along the wall.

Construction of whole fortress is so beautiful. Meaghan describes as ‘Korean Great wall’ and I thought that’s quite an appropriate nick name for it although our King didn’t bury people under.

It is beautiful and we can see how they defence the people of Suwon through whole equipments and hole for archer (we guess). Like this! Ian show us how.

There’s lots of ups and downhills. But the walking pass built convenient for people. Last of second last mayor of Suwon put lots of effort on manage Suwon Fortress. He set up all the lights along the wall, stomp walk path and make many promotion for visitors. 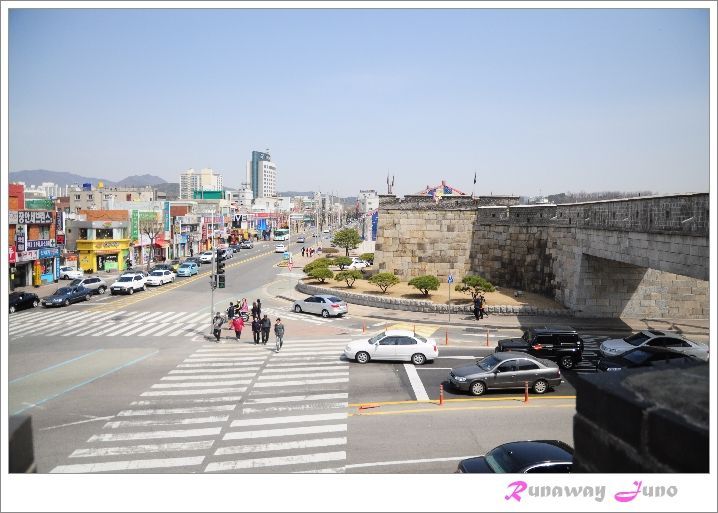 Suwon Fortress and Citizens of Suwon

Great thing about Hwasungis it doesn’t affect people lives around here. Depend on their policy, city push people out to clear the area for their new project, but Suwon and King Jeounjo didn’t. You can see houses in and out of the fortress.

We reached to Paldal mun (South Gate), where the main event is held time to time. You can buy a ticket for monorail tour to whole Fortress and participate to archery. It opens almost every hour, so we decided to have a lunch then come back for watching/doing archery.

2002 Korea/Japan World Cup was insane. Korea did really good, we were 4th! The best World Cup ever. World Cup park is really pretty. Large space for running, grass, lots of art works and even golf club is in.

The coolest thing in World Cup Park is foot ball shaped bathroom!! Who knew we have this sense of humor!

Suwonis famous for rib, I still don’t know why but sure Suwon has many great rib places. We went to the best i know. Everyone saticefied, we were too full and it was so delicious! Add to your check list. “Go eat at Rib place in SUWON”

I quote “Meaghan likes Korean ribs than her own” from Meaghan’s Facebook status that night.

Yes. It was that good.

With our full belly, we went back for archery in Suwon Fortress.

Anyone can participate. Instructor showed us how and let people do their own. About 20 bow are there, so 20 people can do at once, and 10 arrows per person.

Most participant were kids. We decide to just watch how that works.

It was cool! How many times you can shoot an arrow in UNESCO world heritage?

Also many buses in front of Suwon Station, subway line 1

We went back to Seoul after that. Ian had his schedule, and Meaghan and I had Musical plan, watching not doing it. . Although I would love to do 🙂

Meaghan is working at showbiz and I am Musical junky so it’s a necessary schedule for both of us. When you come to Korea, consider Musical in your itinerary. It’s not broadway but we have nice little, middle size theater for shows. Some shows even has English subtitle.

Most of musicals are in Daehakro. Our choice of the night was “김종욱 찾기 (Finding Kim Jonguk)”. This is one of my favorite shows. Romantic comedy with lots of singing and dancing in small theater size for 100 audiences.

Do you know Korea has 33 Krispy Kream stores? There’s non in Hong Kong.

Meaghan is from Atlanta, apparently so does Krispy kream, and she’s living in Hong Kong. I didn’t know that, so Meaghan almost screamed “Krispy Cream!!” out when she saw it. 🙂

We went and get hot glazed. I am not such of a sweet toothbut that was wonderful. Because I was witha good friend? 🙂 For two days, Krispy Kream became our ‘the’ spot.

And I introduce her “Choco pie”. Do you remember the article I wrote? You can check it in this link.

She said it’s little like Moon pie in States. This is what Meaghan eat in picture above.  Should eat that when I (finally) visit States.

Since we were not into drink or dance that night we checked out shopping district. I like shopping in Hongdae because there’s always really unique items. Cloths, accessories, andbags. We found pretty cool stuff. yes.

We even bought a matching tops. We figure it’s okay cause we are not living in same city, right?

Yes, we gotta eat. But since we eat HUGE lunch, we we had light dinner in a small, quite cafe. 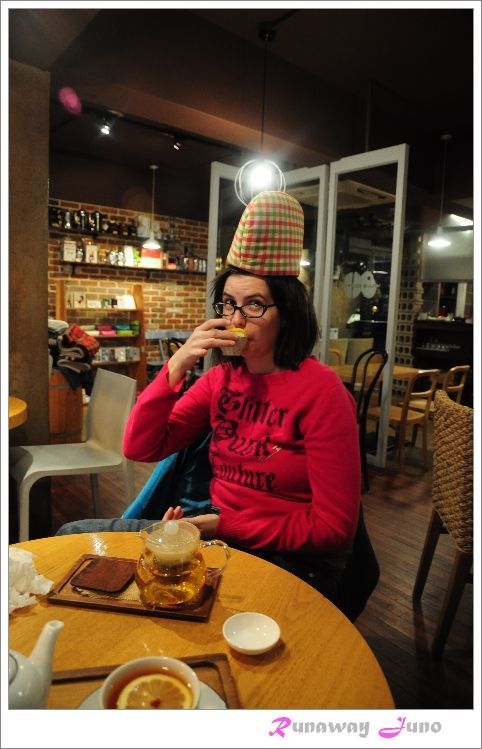 .
*HOW to get there
.
Hong-ik university station, subway line 2
.
.
Today is such a success. We all were really happy. What’s not to like? Great weather, beautiful UNESCO heritage, musical and shopping? I would say, never better!
.
.
What’s for tomorrow? Thrilled already?
.
.
Well, to be continued…
.
.

17 thoughts on “Itinerary of short trip to Seoul, 2nd day”