Two weeks of my journey in the Philippines is finished. It was a complex mixture of good, extreme bad and something in between. The country was hard to figure out, but it gave me the biggest joy time to time. Over all, I’m glad I visited. If you ask me what was the favorite place during the two weeks, I have to say, Malapascua island. (note: I only traveled to southern part of the country – Panay, Guimaras, Negros, Bantayan, Malapascua island and briefly, Cebu)

It was one of the most laid back beaches I’ve ever been. The long and white sand beach is perfect for evening/ morning stroll. Sea level is constant, makes it a nice condition for swimming near the shore. Water is crystal clear. The beach resorts and bars on the island can be a comforting place to rest for a while. I’ve never met this many international traveler in other parts of the Philippines. And most of all, there are many great diving spots near the island. It is an excellent place for just snorkelers (like myself).

I saw the world of ‘Finding Nemo

’ during my time at Malapascua Island. Being around the open ocean wanted to see one of the best movies in the world, Finding Nemo, again. The movie made such a big impact in marine life, and made a permanent damage to clownfish because everyone calls it Nemo instead of their own name, clownfish. Anyhow, very appropriately, we watched it when we were in Bantayan Island, and the vivid life of underwater looked very realistic. And, I experienced how well made the movie is, during the snorkeling trips in Malapascua. 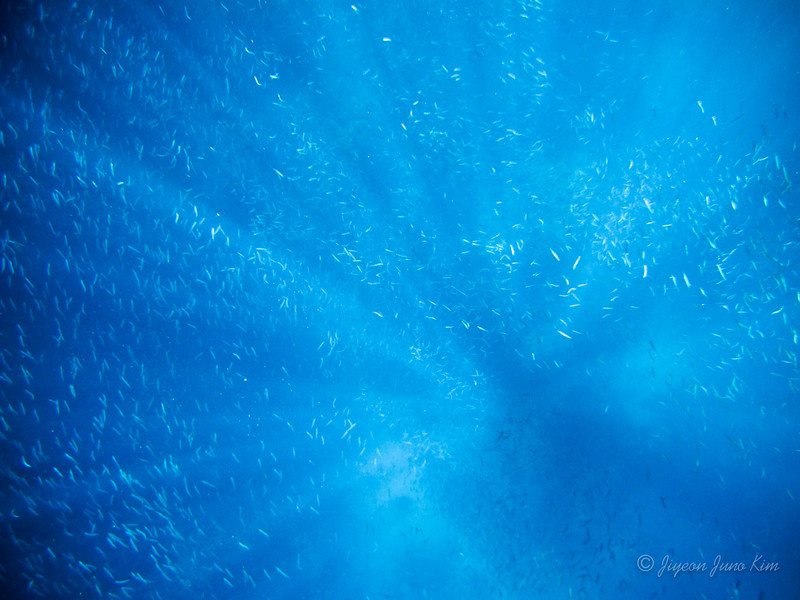 Clearly, the best attraction of Malapascua Island is diving. But there are many other diving spots around the world. What makes this place so special? Because of the Thresher Shark. Malapascua Island (Monad Shoal to be exact) is the only place in the world where you can encounter Thresher Shark daily basis, in a depth suitable for recreational divers. The top of the shoal ranges from 20 – 27m, with a sheer drop-off down to 45m. Thresher sharks like the fresh water in the early morning when the sun started to shine, so the trip always takes at 5am.

Seeing the ‘drop off’ of Calanggaman Island was a surreal experience for me. Do you remember when Nemo swam off from the drop-off and touched the boat? It looked exactly like that. And do you remember when the diver appeared at the edge of drop off and took Nemo? The other diver took a photo of Marlin with a flash, so it temporarily blinded him? I was floating on the surface of the water with my snorkel mask, and watching the scene with the drop-off, divers with cameras and the underwater life were very much like from the movie. 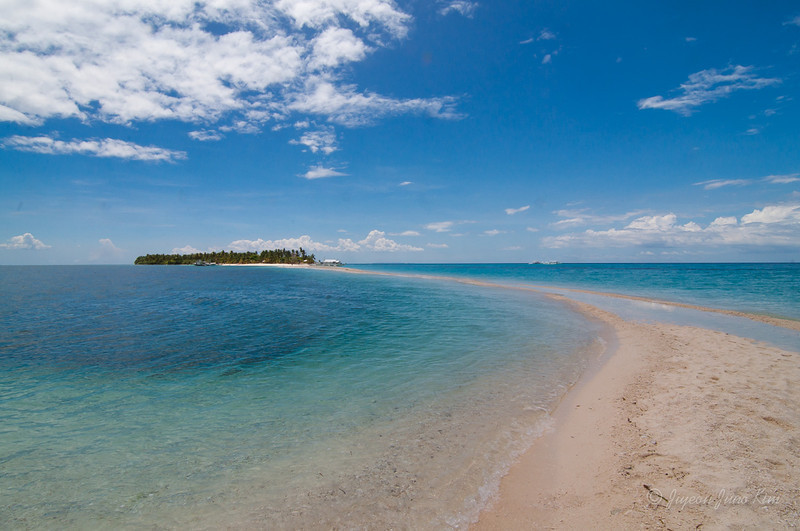 I saw Gill, Moorish Idol, for the first time. He was stunning under water, the yellow stripe almost looked like shining like a neon sign. I didn’t see surgeonfish (Dori) but saw many lookalike blue ones. Crown fish really does like to hang out in the coral. The underwater world wasn’t colorful as from the movie (of course), but it resembles quite well.

Besides of all the Nemo talk, Calanggaman Island is definitely a great diving spot. I’ve never seen that many different kinds of marine life at the same time. It was the best underwater scene I’ve ever seen as a snorkeler. The visibility was clear as far as 20km underwater.

As a protected sanctuary, Gato Island offers a great scene to divers. Seeing all the school of fish was surreal to me. They didn’t really care that we were swimming with them. I saw many tunas as well. This was the place where we saw sea snakes. Black and while stripped sea snake is poisonous, but they are very pretty to look at. They lay eggs on the shore as well.

These are only a few among many dive sites (that I’ve been) around Malapascua Island. There are many and diverse options.

One more thing you need to know about Malapascua Island is the chickens (roosters to be exact). I was wondering why there were so many chickens in this small island and why they cried all day long. It was an extraordinary behavior as roosters from the knowledge I have about them. My guess was maybe they export them to the mainland or something but I was wrong. My question was finally answered by a local man. The chickens are living in Malapascua, and preparing to participate the weekly cockfight. People gather near the ring every Sunday, let the chickens fight each other. They were extremely well cared (shiny feathers, well fed, well trained) for this event. In Malapascua, they are the money.

I’m just telling you just in case if you are wondering about the chickens just like I was.

How to get there

You can always make a ‘special trip (hire a boat or tricycle)’ like local people call it, but it is possible to get there by public transportation. From Bantayan Island, you can take a ferry from Santa Fe port to Cebu City which takes about two hours. Then you need to head to Maya port, by bus, about 40 km away from the Cebu port. Take a tricycle only to Pedro, and take a yellow Ceres bus to Maya Port. From there, there’s a regular ferry leaf to Malapascua. It sounds complicated, but it is pretty a standard travel procedure in the Philippines.

If you are coming from Cebu City, just take a bus to Maya port (4+ hour trip), and take a ferry to Malapascua Island.

Malapascua Exotic Dive Resort was the first dive shop ever opened on the island. Dick de Boer, Dutch nationality, was the one first ever dived with the Thresher Shark at Monad Shoal where is a worldwide attraction now. He and his wife decided to build a resort and a dive shop, and now it became a 5-star resort and National Geographic Dive Centre. The dive shop has expanded over the years, and they have the best gears, instructors, and Divemasters in the island.

Exotic, as what locals call it, has a wide range of rooms from super deluxe to GoPro lodge, where I stayed. They have an in-site restaurant that serves meals and beverages.

12 thoughts on “Finding Nemo in Malapascua Island, the Philippines”