What’s Going on China? – The First Impression of China, or Just Yangshuo It’s been almost a week since I walked over to China. Stayed overnight at Zhuhai, Guangdong and now it’s been four days at Yangshuo, Guangxi. There were many reasons why I choose to travel China from the beginning but I can’t say I’m glad I’m here just yet. Well, the scenery is more than I was expected. I’ve never seen just a dramatic scene before. Still I have few more months to go and plenty more places to travel. It will be interesting to see other parts of China – preferably less touristy places.

Here are some of the quirks I found in China, or just in Yangshuo.

We needed to exchange money. It was 4:30 pm and we didn’t bring our passports. Bank was about to close and it was Saturday. Our conversation went like this:

“Well, in common sense I would say no, but it’s China so who knows?”

We went back to the hostel and asked the manager where is the nearest money exchanger. Of course, only bank does the job and it was already 5pm. So we asked, doubtfully, “Does bank open tomorrow, on Sunday?” and what do you know? She said Yes. Yes, people, Chinese bank works on Sunday.

China is not a place for tea

I thought Chinese people think tea same as water. In Hong Kong and Macau, it was normal thing, a teapot on the table, hot or cold. But apparently it’s not a courtesy anymore in China. Or again, maybe just in Yangshuo. They want to charge 20 yuan for a pot of tea, and we even met a restaurant owner who looked at us like we have four heads when we asked for hot tea in a pot. Tea is one of the reasons why I wanted to travel China, and hot tea is an important part of everyday life. I thought Chinese people are the same way. What’s going on? I didn’t bring travel power plug. I bought a little one in Hong Kong and planned to buy one in China, since everything is cheap in China. But no need. Few places I’ve been so far in China had universal plug. It was a surprise.

China is not a place for bargain, at least Yangshuo isn’t. It almost feels like they take this as an insult. Everytime we tried to cut the price (I mean, 65 yuan -11 USD for a pair of glove, really?), the vendors just walked away, shook their head, shouting “No bargain!”. I thought we supposed to bargain for a third of price in China. Think twice: Is it fake?

There was a warning in Macau, that we shouldn’t buy cigarette outside of the duty free shop in Zhuhai, where the Chinese border located. The reason why? Those cigarettes are fake. Is it even possible to make a fake cigarettes?  I didn’t know that. It’s China, the home of everything. Then I saw the shop in Yangshuo – Kentucky Fried Chicken lady?!

Road crossing is a challenge

Don’t bother with the street light and cross walk. Trust your own eyes, and cross when you see the opportunity. Few years back when I traveled Beijing, this surprised me, big time. It was right after Beijing nominated for winter Olympic, so I thought it must be more developed than I thought but no. Seems like more than 90 percentage of people don’t care about the street light. So, hold your breath and run through the cars and scooters! I have a strong negative feeling toward electric bikes in China. If I’m in different place I would be impressed by them but not in China where the red light doesn’t mean anything to anybody. The biggest fear: they don’t generate sound. Cars and scooters, I can escape since they make noise but not these electric automobiles. I know it’s good for environment, but I just hope they care little bit more.

I did pretty well in Hong Kong and Macau. I don’t speak Mandarin or Cantonese, but I can read chinese characters due to the concentrated education system in Korea and Korea and China’s complex history together. I could point out things I wanted and communicated with people by wrote down simple letters.

However as soon as I entered China after Macau, the signs became noticeably difficult to read. Then I realized that it’s the simplified letters. I knew Chinese are using simplified one in conversation or writing, but didn’t know they use it in official signs.

Well, China. We have a long way to go. I like how you look. Looking forward to have more delightful days in China! 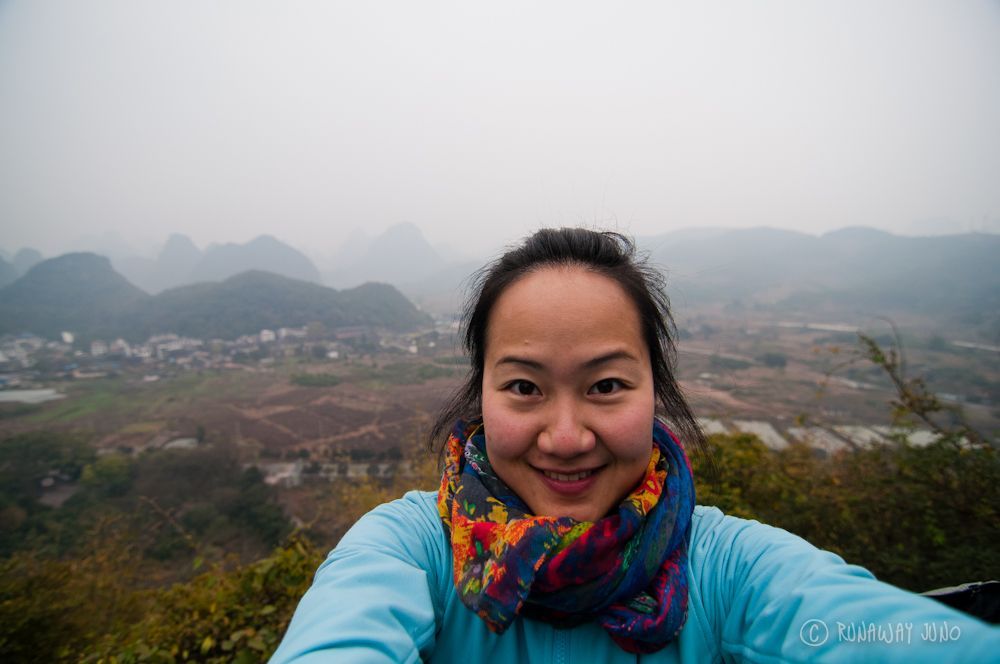 Me, on the top of Moon Hill, near Yangshuo, Guangxi, China.

24 thoughts on “What’s Going on China? – The First Impression of China, or Just Yangshuo”