How to Visit Three Pagodas for Free in Dali, Yunnan, China

How to Visit Three Pagodas for Free in Dali, Yunnan, China 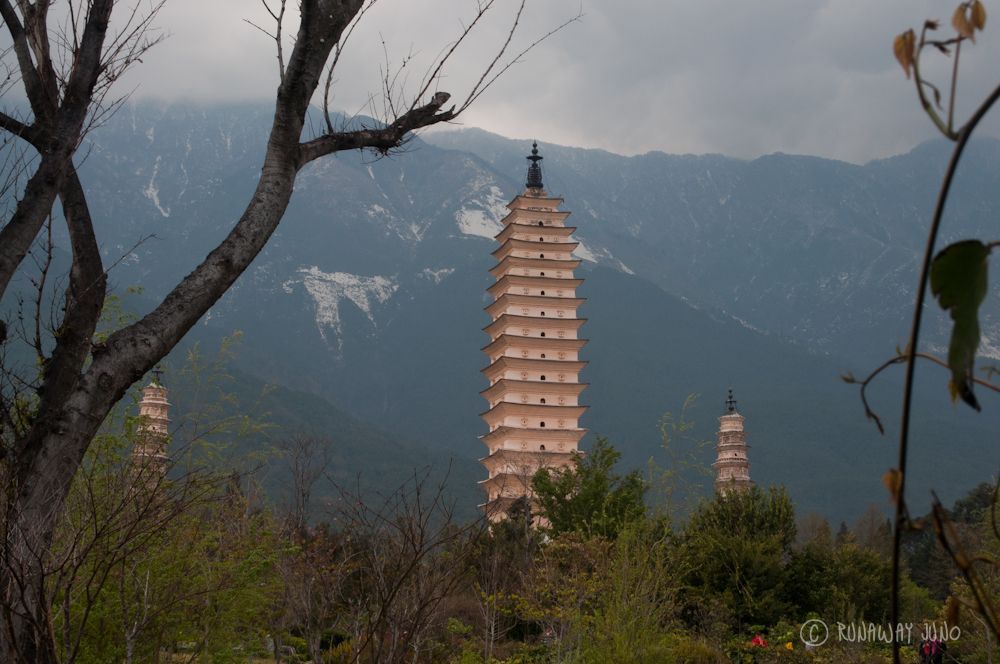 Entrance fee is the biggest obstacle in China to budget travelers. You have to make the decision based on how much you are willing to pay to see/do. It’s over USD10 most of the time, no matter what it is.
Three pagodas, the symbol of Dali, Yunnan province, China are not the exception. The entrance fee to see the pagoda is 121 yuan (USD20) and if you want to see the rest of the temples in the park, it costs 191 yuan. (USD30) Compare to living expense in China: 6 yuan for a bowl of noodle, 50 yuan for a double room, 1yuan for a city bus, the entrance fee is over the top.

The typical thought; ‘this is my only chance to see the pagodas and they are the most famous landmark in the city. I should go in.’ kicked in, but ‘I’ve decided to not to pay and find the other ways at the end.

The reason why is…

 * The only advantage that I get with the ticket is to see the pagoda closely. The pagodas are sealed. You cannot go in.

 * The surrounding temple is newly built later in 2005.

 * Frankly, you can see the pagodas quite well outside of the park.

Here’s how I got nice photos of the number 1 attraction of Dali for free.

What you need is…

You’ll see Three Pagodas from afar. The tallest one is 67 meters high and two others are 42 meters. Yes, they are pretty tall. And there are no tall buildings in Dali, so it makes easier to spot the tall pagodas. I started to walk through West Gate, and I could spot it right away. It locates about 1.5km north from the city center. Follow the street toward the pagodas, and you’ll see the souvenir shop. They don’t charge you to pass the souvenir stalls. So go in, and snap some shots. The view of Three Pagodas, on the way. Finding my way to souvenir shop Three Pagodas from the souvenir stalls.

I couldn’t go any further from there. There was a guard every door. So I started to walk around. From the big souvenir shop, try to go around west. You can follow the wall up the hill, and you’ll see a good view eventually. I enjoyed to walked around the neighborhood and took photos of San Ta with surroundings. From there, you can follow the wall of the park. The wall will lead you to the hill, and you’ll see the good view of San Ta and the temples along the way. This is when the zoom lens will kick in. Mine surely worked well. The Pagodas with the city make a good view for the photo. I could see Erhai Lake and other villages afar. Three Pagodas above the wall Three Pagodas above the wall. Taken with a zoom lens. Three Pagodas above the wall while walking on the hill Three Pagodas above the wall while walking on the hill. And with military equipments. Three Pagodas in the neighbourhood

You’ll see there’s no way to go further, and realize there’s no point to climb the hill anymore. So I walked down. And I found the actual entrance of the park where you can buy the ticket or a tour program. And the best shot came from there.

There was a screen in the window in the waiting room at the ticket office. I sneaked back to the screen to see if I could see the pagodas from there, and certainly I could. And just like that, I got the money shot. Three pagodas from the entrance of the park

So yes, it’s your choice to make whether pay or not to get in the park. The only shot I missed is the famous reflection shot with the lake inside of the park. But I’m happy with my photos and glad that I made an effort to see the most of them. Even though I refuse to pay to go in, they are pretty awesome to look at and see the history behind it. The tallest one in the middle was built in 9th century. When you are in Dali, make sure to check them out from various locations. The last photo is from when I was hiking in Cangshan (the Cang Mountains), looking down Dali.