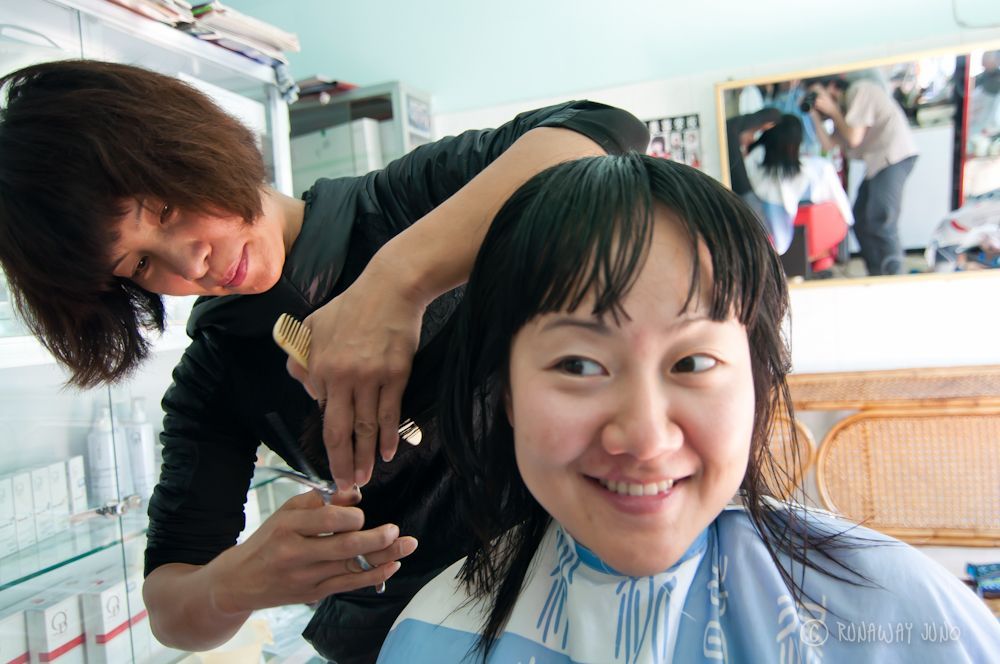 As a girl, I have a vision with my haircut. Basically, I want to look good. I usually like short hair but – I don’t know where it came from – there’s the universal image of a pretty girl with wavy long hair with the wind… It’s every girl’s (or boy’s?) dream, I’d say. As far as I can tell, every girl wants to have long hair at least once in her lifetime. I’ve tried to grow it longer for years and years but I wasn’t patient enough. I always quit it and said “I look better in short hair anyway…”

For the last sixth months while I was traveling, I successfully maintained the long hair with only one reason – it’s easier to travel. But I reached the point that I couldn’t do anything with my hair anymore. You know (if you are a girl or you’ve had long hair before), when your hair is not short enough to let hair down or not long enough to tie it up. And frankly, I want some change. So, one fine day in Jinghong, Xishuangbanna, China, I’ve decided to get a haircut. There were at least one hair salon in every two blocks in the town. I supposed they would know what they do.

The problem was, how to…?

My Chinese is not good enough to discuss fashion and most of the people in Xishuangbanna are not speaking Mandarin anyways. For describe what I want more clearly, I pulled out one of my old photo from my phone and showed it to the hairdresser. The process went smoothly. She understood my needs and she looked pretty arty fartsy.

When she was starting to cut my long hair, I saw the problems that maybe we didn’t communicate clearly. Before she cut, she drew something for me to choose. I thought that was for how much layer I wanted. She must have understood as ‘a lot of layer’ because her scissors were moving vertically not horizontally. I needed to stop her and drawing another set of hair on the paper to explain what I want. We looked through 5 different magazines to pick a style that suited me. Chinese hairstyle is not really my taste, to be honest. Some of the were just too dramatic.

It went smoothly after that. I felt bad because it took a long time for all the communicating process. At the end, I quite liked the hair she created. It wasn’t exactly what I wanted but I’m quite satisfied with all the process. I like the hairstyle, but most of all I appreciated her patience. Jinghong, Xishuangbanna was one of a few places that we liked in China. It was not so much easy to travel around China in so many levels, but Jinghong was relatively easy. They must be used to communicate with lots of different types of people – tribe people – and travelers. Maybe that’s why our hairstylist had so much patience to deal with two foreigners who couldn’t speak her language. I’d never thought about a haircut in Guilin or Jiangcheng.

Once again, this is what travel is all about; experience. I was little worried about having a wrong haircut after saw the hairstyles on the wall, but it was a pretty successful mission. Oh! And it only costs me 25 yuan (roughly 3.5 USD) and 15 yuan (2 USD) for Stephen. Ain’t bad, huh?

11 thoughts on “Getting a Haircut in China ain’t Bad”