Halloween 2011, I got an invitation to a Halloween party. A week prior to Halloween, in fact. The party was hosted by Chris, a friend’s friend, an English teacher in Seoul. He had only one rule: no animal costume. Because it’s too easy.

The costume I end up with: a victim of Fan Death.

I was thinking maybe I could do a dead-looking makeup, but we weren’t going to stay there for a long time, so I just wore normal cloth and made this huge nametag to wear. Everyone at the party laughed at the sign, so I believe it was a success. It would not work in anywhere in the world but Korea.

So now is the time that I have to explain why this is funny, apparently, to everyone?

“Fan death is a widely held belief prevailing in South Korea that an electric fan left running overnight in a closed room can cause the death of those inside. Fans sold in Korea are equipped with a timer switch that turns them off after a set number of minutes, which users are frequently urged to set when going to sleep with a fan on.”

Believe it or not.

But the timer is a good way to save the energy, no?

I didn’t recognize how big issue this is until my friend Luke Martin pointed out on his very popular comic book about Korea: ROKetship. (FYI: It’s a published comic book. If you are an ESL teacher in Korea, or  anywhere in Asia, visit the page and look through his comics. He’s extremely talented.) 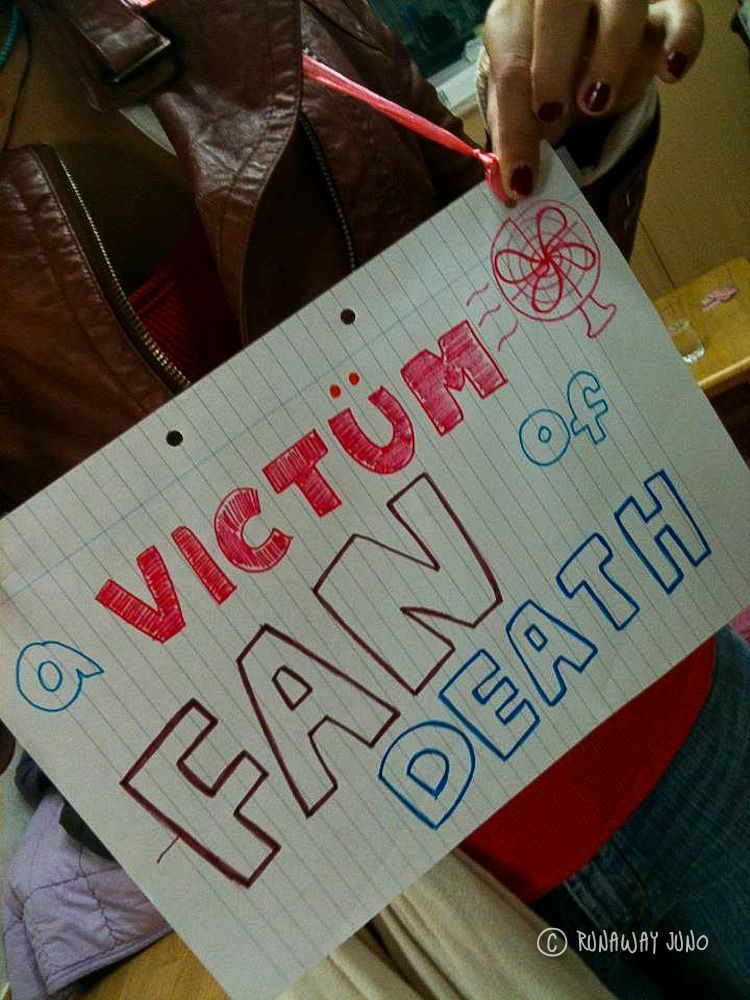 So, do I believe it?

As a superstition? Maybe. I was little bit uncomfortable to dress up as a victim of fan death because it felt like I was making fun of my own people.

If I don’t believe it, then why I was uncomfortable? Even though this is one of the most ridiculous things ever, if people believe it as a truth, there’s nothing I can do about it. I told them why this is scientifically impossible whoever mentioned fan death, but I know it will take time to change how people think nation-wise. Though, it has been quite a while since I’ve heard about fan death. It’s not even an issue anymore. But, my grandmother was concerned and warned me every night in summer when I was little. She didn’t say I could die, just she thought it was not healthy to turn the fan on all night. So I perfectly know fan death is scientifically wrong, however it is still the thing that my grandmother believed. That’s why I’m protective of my own people’s idiosyncrasy.

Not everything in the world can be scientifically proved. Urban legend, religion, tradition… whatever in different format. There are customs and traditions that even locals don’t know where it came from. This week’s #TTOT was about ‘Customs around the world’. Just little things, even if we don’t believe it, or even if we are against it, sometimes there’s just nothing we can do but watch and learn. At least be not judgemental. Isn’t that the whole point of travel? See and learn how people live in different parts of the world.

Although I will not turn off the fan because I’m afraid to die, I will think about grandma.

Disclosure: Though I claimed as I deliberately made it to be wicked, but you are right. Yes. I spelled wrong, victum instead of victim, so I made it German style with two dots on U. Please don’t judge me.