Let There be Land… The Creation Story of Wendat

According to The Book of Genesis…

“In the beginning God created the heavens and the earth. Now the earth was formless and empty, darkness was over the surface of the deep, and the Spirit of God was hovering over the waters.
And God said, “Let there be light,” and there was light. God saw that the light was good, and he separated the light from the darkness. God called the light “day,” and the darkness he called “night.” And there was evening, and there was morning—the first day.”

And he worked five more days and the world was created.

In a book of science, the universe expanded from a very high density and high-temperature state, the Big Bang, 13.8 billion years ago.

But to the people of Wendat, there is another story about how their world was created.

In the beginning, the Wendat lived in the Sky World. There was a great chief who lived forever. He never got sick or weak. He had a daughter, A’taentsik. When A’taentsik became ill, the great chief asked every medicine man of the Sky World but no one could fix her. One of the medicine men said to look into the center of the sky and find the roots of a tree and heal yourself over time. A medicine man had a hole duck around a tree so that she could get at its healing roots. But they dug so deep that the tree fell through the Earth, which was covered by water.

A’taentsik, who was pregnant, also fell into the hole with the tree, but her fall was cushioned by ducks, herons and loons that came to her rescue. “She doesn’t have any wings, she must not know how to fly!” the birds said. She landed on the back of a Great Turtle. She was still ill. Not knowing what to do with her, the birds called on the Animal Council. It was decided that one of the animals should dive deep enough to bring up some of the earth from around the roots of the submerged tree to fix her. A muskrat tried, dove deep into the ocean but he never came back. Otter dove next, but they never saw him again. Next, a grandmother toad said she would try. Everyone didn’t believe in her, since she was old and weak. A grandmother toad dove and everyone thought that was it. But soon bubbles appeared on the surface and grandmother toad put a handful of soil on the Great Turtle’s back with her last breath. Small turtles spread the soil on the back of the Great Turtle where it grew and became a continent called Wendat. 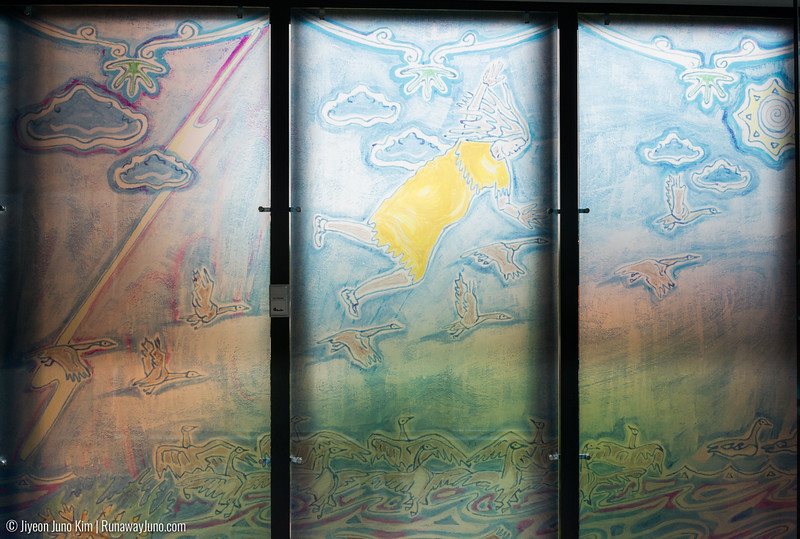 On this new land, she planted the corn, beans and squash everywhere she went. A’taentsik gave birth to a daughter who herself died giving birth to twin boys. Devastated, A’taentsik went away to the West, the Land of the Dead.

The twin grew and it soon became clear that one of them was Order, and the other Chaos. The eldest, Tsesta, world to create good things, in preparation for the arrival of humans on Earth. Tsesta put sap into maple trees so humans could survive from it. The other, Tawiskaron, destroyed the world of his older brother and created magical and evil creatures. Tawiskaron diluted maple sap like water. The twins finally battled to settle their rivalry. Tsesta outsmarted his brother Tawiskaron and won. He restored order on Earth but was unable to completely undo the deeds of his younger brother. Tawiskaron went to his grandmother in the Land of the Dead where they together overlooked the souls of those who die. As for Tsesta, after teaching art and law to humans, he withdrew to the land where the Sun rises. From the faraway East, he continues to watch over his people and see to their needs.

The animals who created the world of Wendat are important figures in Wendat’s culture. In Wendake, a reservation of the Wendat people in Quebec, you’ll see statues of the Great Turtle, otter, toad, and the Tree of Life in a lot of places. It’s amazing to see how the concept of Tree of Life transfers through cultures around the world.

In Korea, we have a lot of stories about how the world and humans were created. How about you, do you know any folk stories about creation to share?