Six degrees of separation: We are getting there 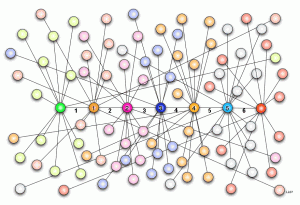 According to our friend Wikipedia,

“Six degrees of separation (also referred to as the “Human spider Web”) refers to the idea that everyone is on average approximately six steps away from any other person on Earth, so that a chain of, “a friend of a friend” statements can be made, on average, to connect any two people in six steps or fewer. It was originally set out by Frigyes Karinthy and popularized by a play written by John Guare.”

Travel made the world smaller. That’s for sure. I thought America is the only country in the world besides Korea (yeah, not even China or Japan) when I was a kid, I thought Africa is one huge country, and I thought ‘I’m fine thank you, and you?’ is the only answer for ‘How are you?’. I know native English speakers are still making fun of those phrases but seriously, true stories. Thank god I know there are tons of more countries are out there including African ‘continent’ and using slightly diverse English now.

Think about friends. Grew up together and went to school together are not the only option to meet friends anymore. Six degrees of separation is something I felt numerous times with many occasions in the past, but now it is easier to make the human spider web than ever. I have so many stories about crazy serendipity but I will spill those in another time, I promise! I know you will forget that I promised but I will remind you with a brilliant post!

Recently, I connected another line on my human spider web. My friend Laura, who is a featured star on Runaway Juno as a representative of Ithaca, NY, Heroin of Driving Miss Age, and the best fisherman in Jeju island, informed me that she’s passing through Chicago on her way back to Ithaca, NY. My eye were sparkled for a second. Well I didn’t check it because.. duh, I can’t see myself but I am pretty sure that those were.

She needed a seasoned traveler who knows how to travel efficiently because she only has a half of a day to explore the city. Guess who I thought?

Ted (@TravelingTed ) agreed to squeeze her in to his schedule. I gave his email to Laura and hopefully they will meet and have a great time at Chicago. Even though I’ve never actually ‘met’ him, but I knew him long enough to know that he is a super cool friend. After some complicated mixed signal (Sorry folks, I would blame the time zone but I should’ve known better), Laura and Ted finally met!!

Look at my new and good looking web!

Ted had a softball game that afternoon (explanation of his shirts), Laura even got a chance to watch softball game in Chicago. What a great way to enjoy. But no Chicago pizza? Come on guys..

I was really impressed by the fact that two of my good friends are going to meet in person, and I was little jealous of them at the same time. Laura, who get to meet Ted in person and Ted, who get to hang out with my chingu (friend, in Korean)! But I was more amused my the former one. This is another way of travel and a good way to make a friend. As much as I love to meet people on the road, this experience was weirdly rewarding for me. Check out Ted’s post for their adventure travel quickie guide in Chicago. I think this is a great guide for those who has few hours in Chicago. Though I love to sit at the airport and doing some social networking, but spend short efficient hours is a great option.

Thanks Ted for kindly show Laura around and even leave an evidence for me!

7 thoughts on “Six degrees of separation: We are getting there”