Part 1. Meditating. Everything is a postcard!

Part 2. Astronomy, why must? 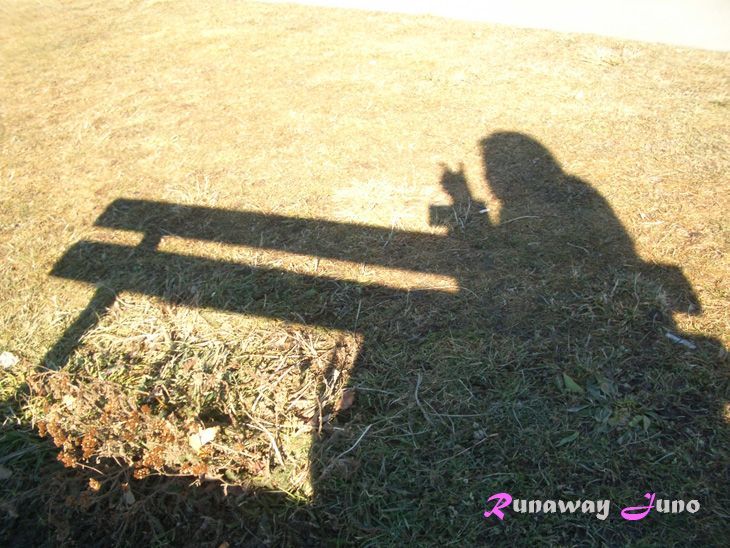 After the tour, went to the tour operator and gave my feedback like I promised. He carefully hears what I had to say..

Well, I didn’t have anything else to do in this town, so I mainly hung out in the office and lake side.

Then he, the manager, let’s say his name is Eric, called someone and asks her to take me to the observatory to look around. What a great opportunity! Turns out my guide to be is the same woman I met last night, ah let’s say her name is Mary. (Sorry if you ever read my post, because I have a terrible memory of remembering people’s name and English name was not familiar to me.. sorry!)

It was such an honor. Because I work at observatory I know how delicate this place could be.

We drove up to Mt.John with her cute little red car. It was almost too beautiful to see. I didn’t notice last night but this is absolutely amazing view. Lake Tekapo is very beautiful itself and all the other mountains and hills around are covered with snow white snow. 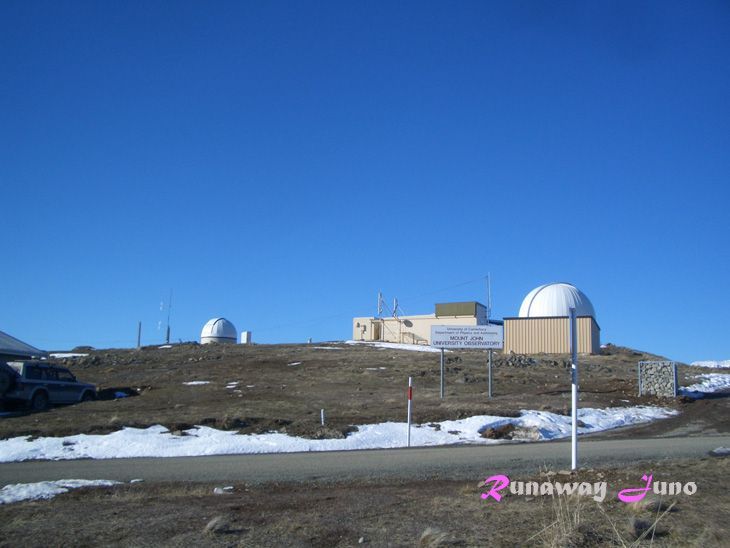 Mary is very easy going person like people of New Zealand. She said you can tell my stop anytime you want. I know it’s pretty amazing view. 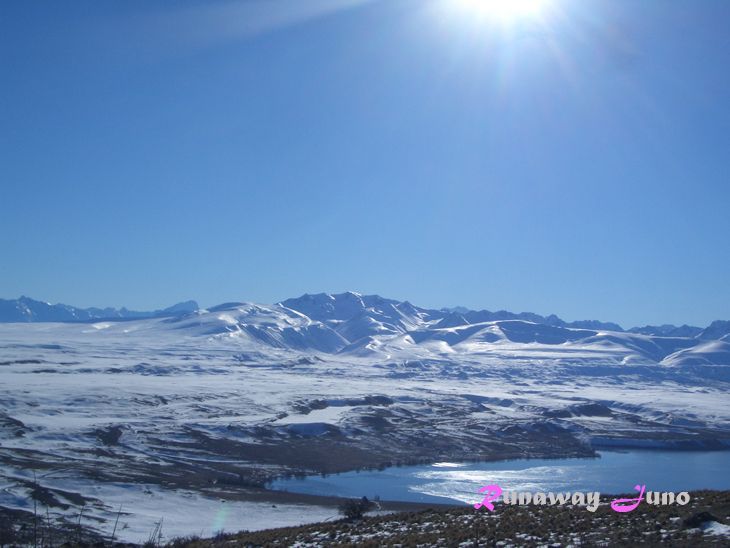 On the way up to Mt.John there is a little bush with tall trees. And suddenly she stops the car in the middle of the road and through something out of her trunk. I thought ‘this can’t be a litter….’ since all the time talking about nature and stuff. So I asked her “what is that?” and she said “Fruits seeds and peels. This long winter, many animals are starving so I gather this and spread every day..”

I was so touched. Maybe this isn’t that much of a gesture but it was to me. I grew up in the biggest city in the country and almost no nature around. I traveled a lot when I was kid but never lived in country side so this friendly nature gesture is very new to me.

And after few miles of driving she stops the car and starts to picking up something in the bush. So there I go “What is that?” again. And she kindly answers me “Pine cone. This winter is particularly long so I put seeds, fruits or nuts in the every hole of pine cone and through in the bush for animals.” She said she does that almost twice a week.

Wow.. That’s all I could think about. Wow.. I’ve heard in the house of country side, people does that with pine cone for birds but it’s mainly for just a one way of housekeeping technique not for the whole nature.

I just had to admire her.

Then we talk through the whole tour and drive, she told me why she lives here. She was just a visitor just like me and fell in love with this all nature, which is totally understandable, and decided to move down here. It has been 10 years since she moved. That was quite a culture shock too. Even though this is all I think about thesedays, move to other country is quite a big deal for Koreans back then. Well, it was just few years ago.  I could feel how much I and we’ve changed. That idea was because of some fixed ideas. Expensive living for starters, language, cultural differences, etc.

There it was another lesson from overseas. Globalization and attitude of “Why not”? 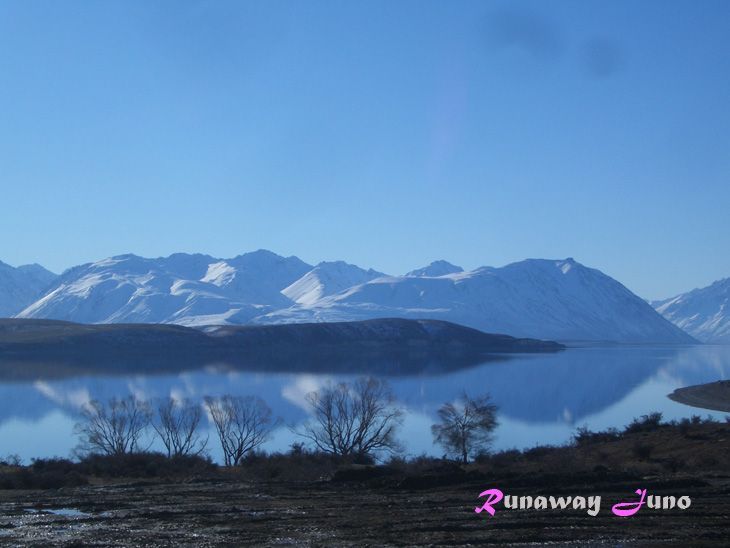 Back to the story, yes Mary was just full of nature. There is one other great anecdote.

We were driving. (At this point, seems like all things we do was driving.. but not true! 🙂 )

We saw something on the road. That was a dead animal probably hit by a car. I was not sure which one, but that poor thing was dead for sure.  Mary got out and picks a stick to move this animal. After a while of my questions, she explains why she moves him. “We have to clean this because..” so I guess “to clean?” but I got totally different answer. “Because, hawk or some sort of animal is going to try to have this poor animal on the road, and he could kill be a car too. So we move this into the bush.”

This is still the most wonderful thing anyone could do I’ve ever heard.

Many of friends I’ve met in New Zealand have pretty same ideas about nature. Not over protected like what I taught, consider it as part of their life. Yes that is more natural way to love nature.

Amazing tour and warmful hours later, I got back to “Earth & Sky”. It was really nice. I only met wonderful people while backpacking, true.

Then Eric invited me to dinner at his house. He know I am a poor backpacker so he wants to make me some dinner. What a nice sweet man!

He cook me a curry chicken something and that was so good. He even make some extra for my trip. So sweet. He actually worked at Korea in the old days. He worked for construction company. I could recognize some places in his photos. What a coincidence, again! 🙂

and the Job offer.

And there’s a bomb. He offer me a job. Since I know a lot about astronomy and all, he wants me to be a Korean-English tour guide here in observatory. He could get me a working holiday visa for me. 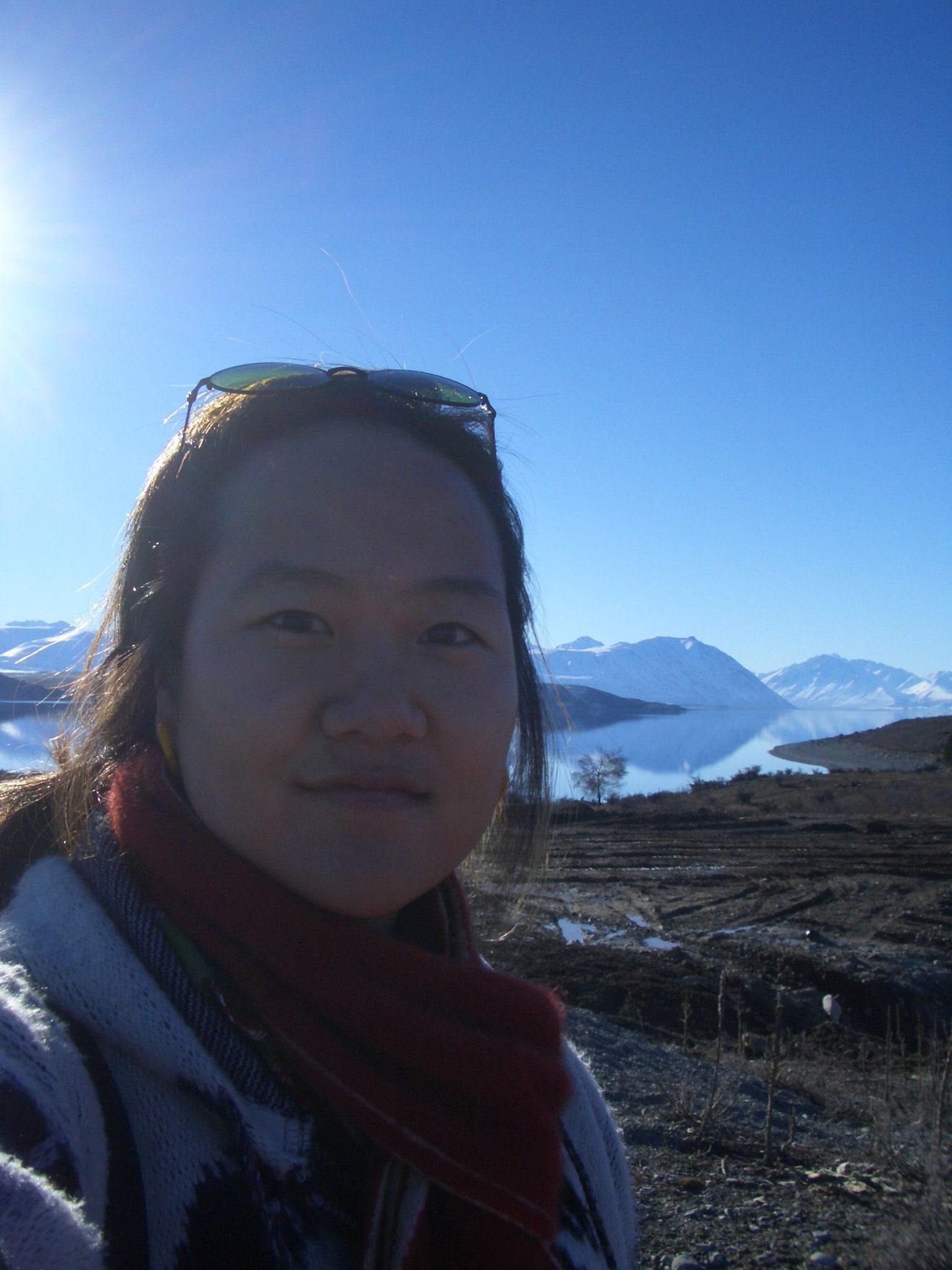 I don’t have many regrets in my life, and I try not to be, but this one is one of my few, and the biggest regret in my life. I should have say yes. I should have take that job. But I was just right before start a grad school, and like I said, leaving the country is very big deal and it’s taboo to taking some break during school. I guess I didn’t brave enough as much as I think I was. I was brave enough to just leave for backpacking by myself, but not leave from school.

This little town, it could be the most boaring city of New Zealand, is the most excited place.

Gave me some peace, spectacular view, the best astronomical sky, private tour to observatory, and this wonderful people and the job offer.

Still, I have pretty good memories about Lake Tekapo, I think you all know what I wanted to say.

Thank you for reading my three stories about Lake Tekapo.

How can’t I not fall in love with travel?

I think I can sleep with pretty dream today.

G’night all, hope you all see some great stars tonight.

Ravishing Lake Tekapo – Part 1.Meditating. Everything is a postcard!