Coincidence. Serendipity. And then some.

During the few days I recently spent in Taipei, I’ve encountered a few head scratchers. It’s not really about cultural differences; it’s more like discovering interesting items that I never thought I’d see. Here are my top 6 funny encounters in Taipei.

Sighted at the bike exhibit at Taipei Airport. After a bit of research, I found out STD is supposed to be a shorten word for standard. Some words are better not shortened. 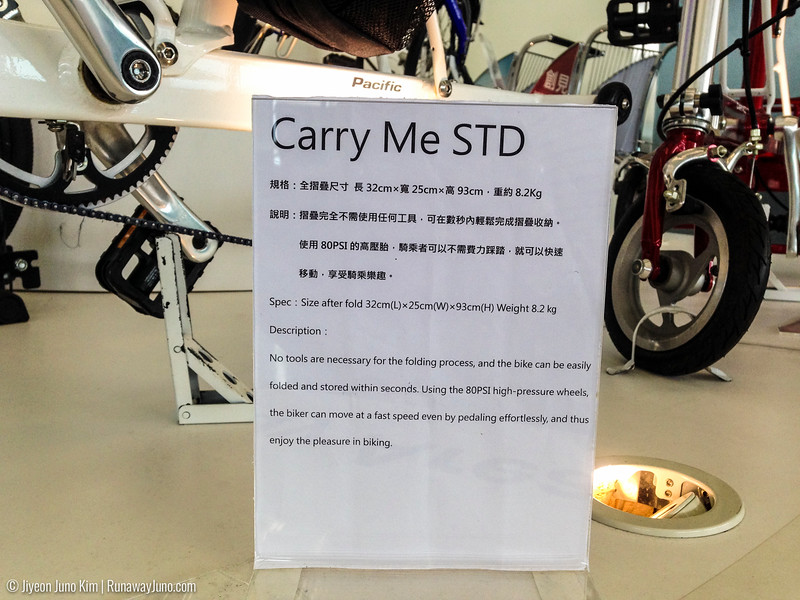 We bought a bottle of water at a movie theater. After the movie, I saw the bottle and it’s extended writing. It said, baby is 80% water. A poem follows:

“At dawn, I awake in the morning light.
Together, my baby and I cherish the beginning of a beautiful day.
Gently stroking my tummy, I felt close to the new life in my own body.
At this moment, I can feel God’s most previous gift growing inside of me.
I drink my babywater to nurture my little baby.”

I don’t think this is really the best way to promote a bottle of water. I couldn’t help but think amniotic fluid was in a bottle. 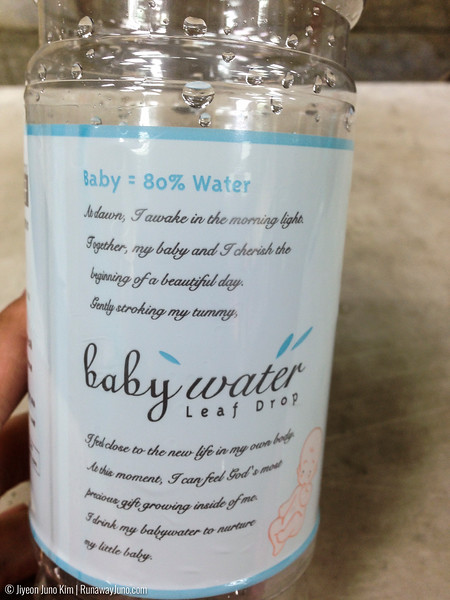 Is this a new thing I didn’t know about? Do we really need black cotton swabs? Why is this better than white ones? Or is it just personal choice? Has anyone ever used this product? I have so many questions. I truly want to know. 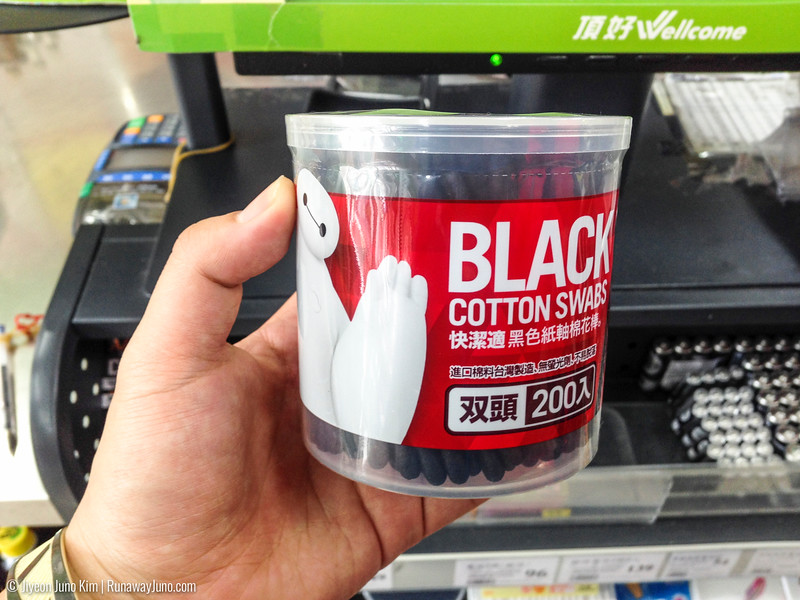 Unfortunately this photo is blurry (sorry!) but this is from a metro station in Taipei, pointing to a South-up oriented map. We spent about five minutes to figure out where we were going, and then saw the bearing was upside down. I know that South-up map orientation is a thing, but never actually saw it at a public place, especially at a metro station! So confusing… 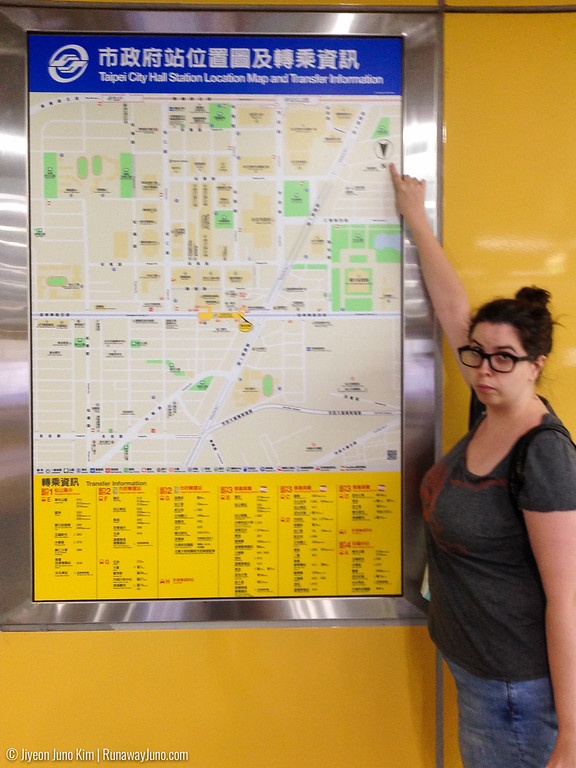 Don’t linger on the gangway

Sighted in a metro. It was my first time seeing the word ‘gangway’ in common use. Dictionary defines;

Gangway
noun |ˈgaNGˌwā|
a raised platform or walkway providing a passage.
• Brit. a passage between rows of seats, especially in a theater or aircraft.
• a movable bridge linking a ship to the shore.
• an opening in the bulwarks by which a ship is entered or left.
• a temporary arrangement of planks for crossing muddy or difficult ground on a building site.

Is this a commonly used word? 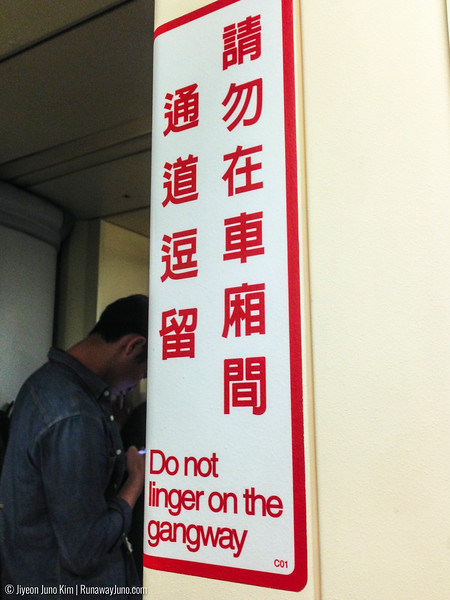 I’m not even sure if I’m in violation of some Internet rule by writing down ‘Waffen’. These two posters were sighted at my favorite breakfast place in Taipei. My breakfast lady made the best dan bing and breakfast bao; I’ve gone there daily. I always sat toward the street, so I never seen this side of the wall until my friend Meaghan pointed out to me. We weren’t positive what it was, just thought it was quite an unusual design to be in a dan bing restaurant. It looked vintage and all. When we came back to our hostel, our jaw dropped after googling these words. Those were Waffen-SS propaganda posters from Nazi Germany! If you don’t know what Waffen is, don’t worry, we didn’t either. 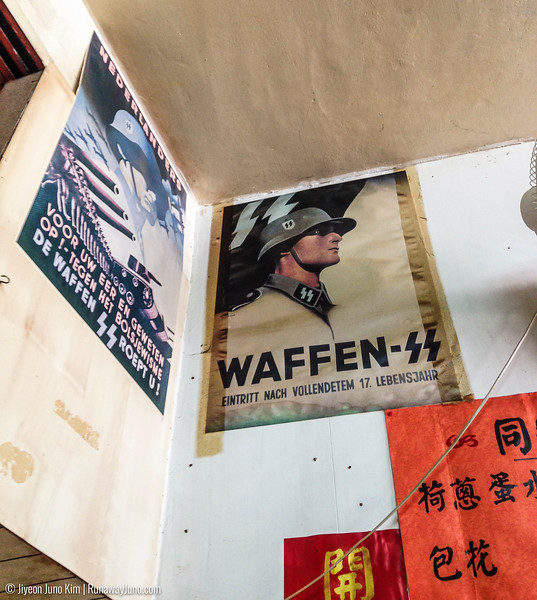 The Waffen-SSwas created as the armed wing of the Nazi Party’s Schutzstaffel (SS, “Protective Squadron”). Its military formations included men from Nazi Germany, along with volunteers and conscripts from both occupied and un-occupied lands.

Why did the sweet old lady have these posters in her “hole in the wall” breakfast stand? What’s the connection? So many questions… I never wanted to speak Mandarin more than this day.

4 thoughts on “My Funny Taipei”