It was a Long Time Coming: Meeting Big Buddha in Hong Kong

Why You Need an Extra Hour While Traveling

The Year 2011: Traveling, Fighting, Eating and Everything in Between

It was a Long Time Coming: Meeting Big Buddha in Hong Kong 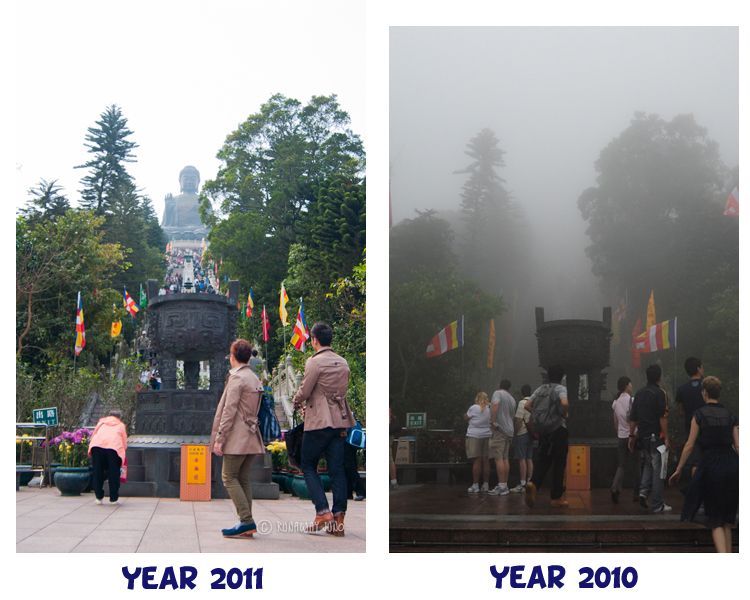 Big Buddha, before and after Some of you may remember the unfortunate event at Hong Kong. It was the foggiest day of my life when I least wanted it. I was supposed to see the largest sitting Buddha in the world up on the peak, but all I could see was a world of fog. Hazy day at Ngong Ping Village… Well, it was a good thing because I’ve never seen such a scene like that but considering all that money and time we put in… a bit of a waste.

A trip to Ngong Ping Village by the cable car is more than just seeing the big Buddha. It’s an experience in the village. But today that was my priority since we have a rough history together. I carefully picked the date for the cable car ride. I didn’t want to repeat the disaster once again. Thankfully, it was a clear-ish day. Ngong Ping 360 recently installed a crystal cabin (a cabin with a glass floor), and we were on one of them. The 25 minutes of 5.7km (3.5 miles) ride by a crystal cabin was almost hard to believe. The view of the surroundings; Lantau Island, Thung Chung Bay, hiking trails and people, seemed like a never ending cable car ride. The World’s largest, seated, outdoor, bronze Buddha. Up on 268steps, Tian Tan Buddha is sitting on a lotus throne; the Buddhist symbol of purity.

Here is the photo comparison between last year and this year. See the differences? Big Buddha, before and after

Constructed from 202 bronze pieces, it weighs over 250 tonnes and is 34 metres high. One word: enormous. It was even visible from the cable car. I couldn’t believe I missed this view last time, but here we are, finally.

On each side of the staircase are statues of Buddhist saints: Bodhisattvas. They are venerated for deferring heaven in order to help mortals reach enlightenment. Po Lin means ‘precious lotus’. It was developed as a place for pilgrimage in the 1920s. Po Lin Monastery is well known for its magnitude, serenity and environment. The main three statues inside the monastery indicate Buddha’s past, present and future. The big Buddha statue is built as an extension of this monastery. About 10 minutes of walking will lead you to the Wisdom Path. It features an arrangement of 38 10-metre-high wooden columns arranged in the infinity pattern. Each column shows calligraphy of Heart Sutra by master of Chinese Studies Professor Jao Tsung-I. Ngong Ping Village How to…?

You can reach it by hiking, bus and Ngong Ping 360 cable car from Tung Cheung MTR station.

#disclosure: I was invited to take Ngong Ping 360 Cable car to Ngong Ping Village. I really appreciate their generosity. However this post is written in my own words.