Food, whisky, and landscape… Scotland is full of surprises.

Scotland, a small country that is part of the United Kingdom, was the first travel destination of the New Year. I visited Scotland during the Hogmanay Festival and traveled to Edinburgh, Inverness, and a few other places in the Highlands. IT sits to the north of England, but the culture here is very distinct and interesting, as I recently found out.

I had a chance to visit Whisky Experience in Scotland’s capital city, Edinburgh. Whisky is one of the drinks that I want to like and know more about. I asked almost every Scottish person I met if they really liked whisky. Surprise, surprise, the answer was yes. Also, they have all sorts of favorites. Scotch Whisky was a popular drink choice for the New Year’s Eve.

The world’s largest Scotch whisky collection is located in Edinburgh. The biggest bottle of whisky, measuring in at 105.3 liters, is also found here (105.3 liters = 150 bottles of whisky). According to people around here, if they open the bottle it won’t survive one night. That’s how much Scots love their whisky.

One thing I didn’t know about Scotland was that people here are extremely friendly. Of course, we meet a lot of friendly people on the road in any country, but there are certain places on the planet where people generally are or aren’t nice. Scotland is surely one of the friendliest places I’ve been to. They just love people it when people visit.

They do wear kilts

In Scotland, it’s not uncommon to spot a kilt on the street. Especially because it was the winter holidays, a lot of men were wearing kilts to parties and gatherings.

A kilt looks like a skirt, but how you put it together is quite complicated. It is tailored to wrap around the body at the natural waist, starting from one side around the front and back and across the front again to the opposite side. It covers the body from the waist down to the center of the knees. The overlapping flat layers in front are called aprons, and the single layer of fabric around the sides and back is pleated.

With the exception of some countries, like Bhutan, national attire is only worn on certain days, so seeing kilts in Scotland was a surprise to me. In Korea these days you might only see a traditional dress like the hanbok on special days such as weddings or national holidays.

Over the past few days I conquered a lot of different Scottish dishes including haggis. Haggis is made with spiced sheep liver and offal, oatmeal, and onions, cooked inside a bag made from a sheep’s stomach. It’s eaten with traditional sides like mashed turnips (bashed neeps) and mashed potatoes (chappit tatties). Haggis is served many different ways, such as a filling for baked potatoes, deep-fried, or with alongside other meat.

Meat is widely eaten around the country. Beef, especially the Aberdeen Angus breed, and Highland cattle are famous. Scotland is also known for its game meat, such as venison (the meat of the red deer). Fish and shellfish here are the envy of Europe, with a vast array of fish, prawns, lobster, mussels, oysters, crabs and scallops.

The Scottish breakfast that is usually served in hotels and B&Bs is similar to its English counterpart of sausage, bacon, and eggs, but typically with the addition of black pudding (blood sausage) and potato scones. Porridge is another popular option.

Lots of local dessert options are available if you have a sweet tooth. My favorite was cranachan, made from a mixture of whipped cream, whisky, honey, fresh raspberries, and toasted oatmeal. There’s also tablet a (not the electronic kind), a confection made with sugar, condensed milk, and butter. If you want a pick-me-up for the day, one piece of tablet works magically with all its sugar.

There is a Scottish word to describe weather—driech—that cannot be translated into any other language. It means the weather is grey and wet. The British poet laureate Ted Hughes once said, “There’s no such thing as bad weather, only inadequate clothing,” when he was spending holidays on Scotland’s west coast. The weather can be the biggest challenge to preparing for your time in Scotland. It’s not always bad. It’s just unpredictable. But the low-lying fog and drizzle is the charm of the Scottish landscape (and extremely photogenic!), so don’t be discouraged! 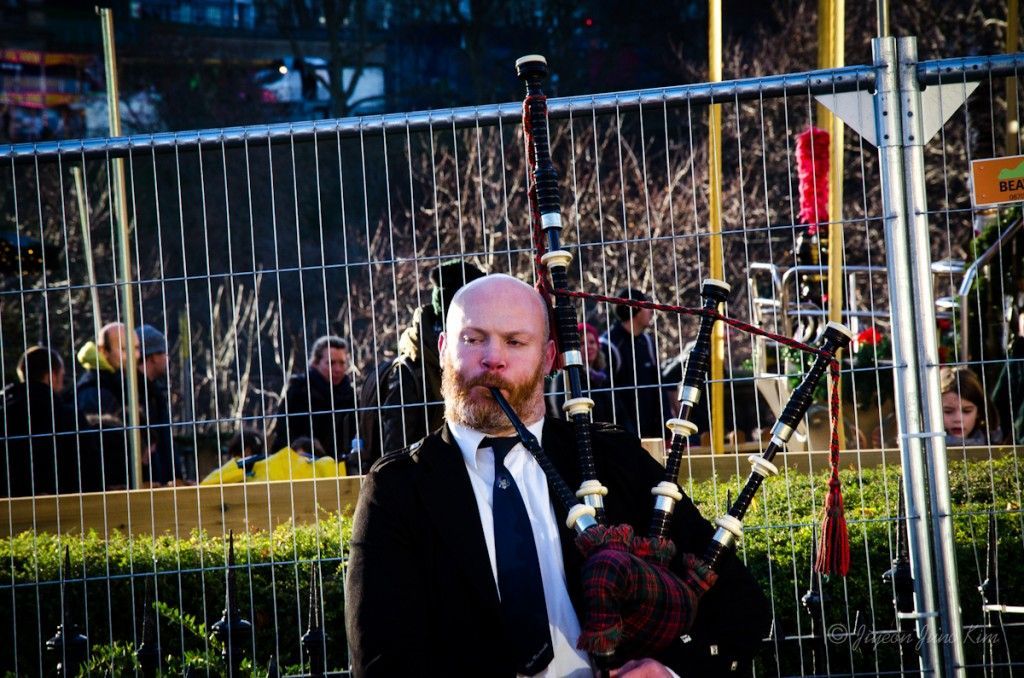 For some reason, I always liked the idea of Scotland and Ireland’s rolling hills and cliffs. I haven’t been to Ireland yet, but for sure, Scotland is green. All the fog, mist, and rain keep everything here super green year round

In the Scottish Highlands, the leafless forest looked like the birch trees had caught on fire. In contrast, the ground was burning with green. Scotland’s forest is pretty much covered with moss. Rocks, branches, stone walls, bridges, all things damp and wonderful are covered with 50 shades of green. You can imagine how much I enjoyed it.

18 thoughts on “The First Impressions of Scotland”