Books from my Tour Asia: Reading List of a Second Language Speaker 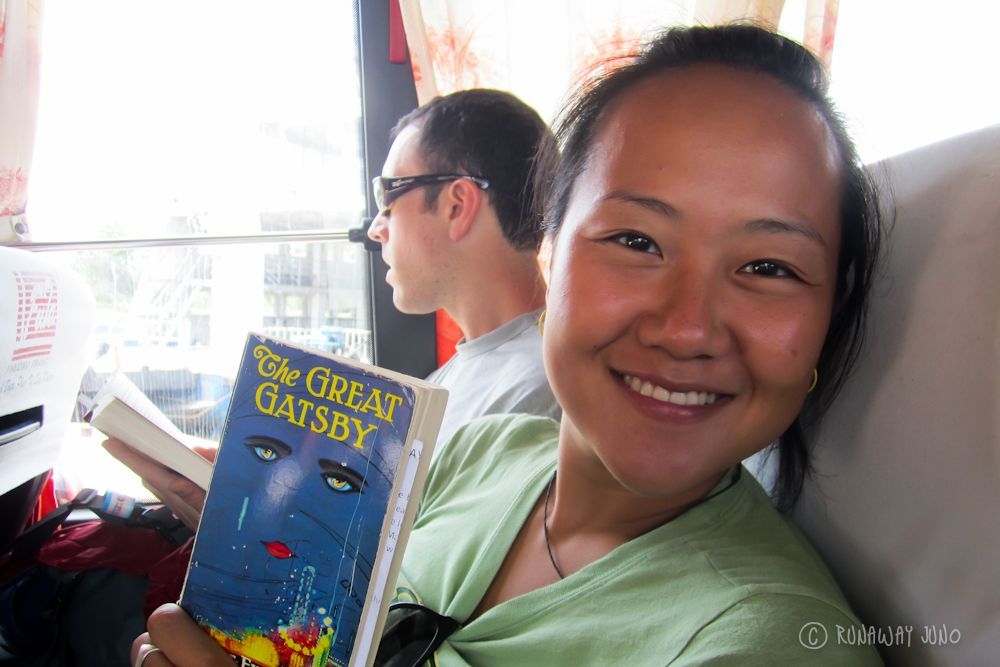 Do you read on the road?

I do. Reading is one of the most joyful aspects of travel. We always have excuses not to read; I don’t have time to read, I’m too busy. Simply there’s no time to spare for reading in a daily routine. Traveling and working is mainly my daily routine now, and it also allow me to read more. When I’m moving; in the bus, train and airplane, when I’m camping and when I’m staying at a monastery in the top of the mountain with no electricity. There’s just more time to read, and I’m loving it.

English books are way easier to find than Korean books. I like to read original ones than translated version anyway, it works for me. I bought some books before the trip, and exchanged books with other travelers.

Here are the books that helped me get through the tough times in Asia during my last six months in Hong Kong – Macau – China – Laos and Vietnam. So, these books were easy enough to read for me, a second language speaker.

“Moab Is My Washpot” by Stephen Fry

I got it where: Stanley market in Stanley, Hong Kong
I got it how much: 25 HKD (3.5 USD)
I left it where: Muangnoi, Laos
I exchanged with what: the Understudy

I like Stephen Fry. He’s wittiness amuses me. I randomly ran into “Moab Is My Washpot” at the second hand shop in Stanley market. I brought few books for the trip but I didn’t hesitate to get this one because I knew it would be great. And it was. Basically it was a biography of Stephen Fry, written in 1997. He narrated how he had a hard time in school and life; growing pain and more. I could relate to a lot of occasions that he experienced as a kid who was different. Also it was nice to see how he made a success in his life as a writer and a performer. If you like English humor or the author, it’s worth to spend your time.

I left it at a café in Muangnoi, Laos. Normally you can exchange two books for one in Laos. English books are not that easy to get. I exchanged two books to the Understudy.

I got it where: Downloaded online few years ago

If you are interested in Science, more specifically Physics, you would be probably heard about Richard P. Feynman. He was a Nobel Prize winner from starters, he was a great lecturer, one of the most brilliant theoretical physicists in the world, and a man who loved humor. His lecture on Physics at California Technology Institute was fully recorded and published. It also helped me to understand physics better when I was in university.

Surely You’re Joking, Mr. Feynman! (Adventures of a Curious Character) is a series of short anecdote of his life: from his childhood memories, when he went to MIT and Princeton, when he was working on the atomic bomb during the war, his hobbies and his love story. He was a man of humor, and surely a quirky individual. That’s why we love him so much.

“What Do You Care What Other People Think?”: Further Adventures of a Curious Character by Richard P. Feynman

I got it where: Downloaded online few years ago

Mainly in the train and bus rides in bumpy rides in China and Vietnam, I was with this book. Especially listened this when I went to a visa run to Laos from Hoi An. It was one of the worst trips with not a pleasant reason. Therefore; it was not a fun trip. But Mr. Feynman to the rescue; he saved me. It made the trip easier while I was concentrating all the scientific factors of Challenger Shuttle accident and death of his first wife.

“What Do You Care What Other People Think?”: Further Adventures of a Curious Character is a more extended version of Surely You’re Joking, Mr. Feynman! (Adventures of a Curious Character). Also it is extensively dealing with some of his important personal and professional histories such as his time as The Presidential Commission on the Space Shuttle Challenger Accident and the romance with his first wife. Catfish and Mandala: A Two-Wheeled Voyage Through the Landscape and Memory of Vietnam” by Andrew X. Pham

I got it where: at a book sale in Vermont, USA last summer
I got it how much: 7 USD
I left it where: to a fellow traveler in Lijiang, Yunnan, China

There are two different opinions; read the book about the country while you’re in the place or don’t. It can be a double edge sword. It can help you understand the place better or can give you a bias opinion. I think it is totally depending on what kind of the story is, and where you are going.

I read Catfish and Mandala: A Two-Wheeled Voyage Through the Landscape and Memory of Vietnam mostly in Muangnoi, Laos. While staying four days in the town with limited electricity, reading in the porch with a view was the best activity I could do.

This book is written by a Vietnamese-American who escaped Vietnam during the war with his family and grew up in America. He returned to Vietnam 20 something years after. His experience as a Viet-kiew (Vietnamese-American), a person who doesn’t belong neither America or Vietnam was quite moving. I could relate to some of the stories. He takes us back and forth of his life between America and Vietnam. If you are going to, have been to Vietnam or if you are interested in multi-cultural experience, Catfish and Mandala: A Two-Wheeled Voyage Through the Landscape and Memory of Vietnam is worthwhile reading.

“The Understudy: A Novel” by David Nicholls

I got it where: Muangnoi, Laos by book exchange
I got it how much: –
I left it where: to a fellow traveler in Lijiang, Yunnan, China
I exchanged with what: –

This book helped me get through a tough bus ride from Jinghong, Xishuangbanna to Dali, Yunnan in China. The bus drive through very curvy mountain road all night, and top deck bed wasn’t helping me to settle down. I almost got sick.

The Understudy: A Novel is a light novel with a simple plot; you can read it without really thinking much. Sometimes it’s good to have a book like that. There was a unexpected turnout at the end. I got this book in Muangnoi, Laos at a café by two for one book exchange. And I left it with my friend in Lijing, Yunnan, China.

I got it where: at a bookstore in Dali, Yunnan, China
I got it how much: 25 CNY (5 USD)
I left it where: a Backpackers House in Nha Trang, Vietnam

I think I read Animal Farm a long time ago, in Korean. I found this book at a local bookstore in Dali, Yunnan, China. I got this because I wanted to read it again, and in English.

I read it while waiting for the bus from Chengdu to Pingle, China, and left it at a backpackers’ house in Nha Trang, Vietnam.

I got it where: for a birthday present
I left it where: to a friend
I exchanged with what: the White Queen by Philippa Gregory

Have you read The Great Gatsby in School? Surprisingly, a lot of people didn’t. As an American classic, the Great Gatsby was recommended reading list through out school years. But I see it can be dull, if you read it when you were a kid. It’s boring.

I got it as a last year’s birthday gift from Stephen when I was in Korea. Very sweet, by the way. Anyway, I’m not sure if I read it before, I don’t remember, but I liked it a lot. It’s really easy to read, for a second language speaker like me, and also very well written. I read it in Vietnam, an excellent bus-reading book. I exchanged this book with Michael, with his book the The White Queen: A Novel (The Cousins’ War).

“The Beach” by Alex Garland

I got it where: a bookstore in Seoul
I left it where: Muangnoi, Laos for a book exchange
I exchanged with what: the Understudy

I started reading The Beach last summer, and finished on January this year. Took me long enough. I finished it while I was lying on the hammock in Nongkiew, Laos. There was a pretty garden around my bungalow. Accompany with Beer Laos, it wasn’t hard to concentrate to read at all. And I’m glad I did. Unexpected heavy plot, but I appreciated the adventure spirit. I thought the book was much better than the movie though. The movie changed too many things far from the book.

5 thoughts on “Books from my Tour Asia: Reading List of a Second Language Speaker”