This week’s Sister’s city goes to New York City, NY. Brought to you by one and only, the lovely Leslie Koch, the one who’s behind Downtown Traveler. Leslie and I go way back. I got to know her through @TravelingTed . At first she was a fellow blogger of one of my good friend. As time goes by we got along really well. Our friendship is another proof of how world wide web has a positive influence on human relationship. Not only we are fan of each other’s blog, but also we share lots of everyday life. Half way around the world and time difference are not an obstacle for our love of this world. I enjoy talking to her and read her writing on Downtown Traveler. If you haven’t check out Downtown Traveler yet, pleas do. You won’t be sorry. I am glad to say she’s my good friend. Can’t wait to actually ‘hang out’ with her in person. Leslie showed local-point of view of NYC through her blog, I couldn’t resist myself to ask ger to be my NYC representer! And also, I would love to know more about NYC through her eyes.

Now, without further adieu, I give you Runaway to sister’s city-NYC, NY, USA by my friend, Leslie Koch.

1. Is it true that only outsiders call NYC the Big Apple? And why Big Apple?

I don’t use the term “Big Apple” in daily conversation, but it’s a well known saying. I never thought about its meaning, but you’ve inspired me to investigate! According to Wikipedia, “Big Apple” has been in use since the early 1900s and may have originally referred to any big city. Now, it’s always associated with New York.

We don’t have any monuments to apples except in Citi Field, home of the Mets baseball team. A giant apple pops out of a top hat every time the team scores a home run. I’m from a family of Mets fans and have been going to games since I was in elementary school.

We have four seasons in New York so the temperature varies widely throughout the year. If you visit in January, you’ll see locals wearing down coats, you can ice skate outdoors and you might even get caught in a snowstorm! In August, it’s hot and humid throughout the city, and many locals head to public parks or nearby beaches to escape the heat.

My favorite seasons are Fall (because of Halloween, the most fun holiday in the city) and Spring (because the flowers start to bloom, the sun comes out and there’s a positive energy in the air).

3. Street food of NYC. What is classic and what is your favorite?

You probably know from the movies that hot dogs are the classic NYC street food. Middle Eastern food carts are also common and serve a range of meat dishes. Since I’m a vegetarian, I can’t tell you what these meals taste like!

Fortunately for non-carnivores, the last five years has seen an explosion in the number of dessert trucks. Cupcakes are the most popular, but there are trucks serving every variation of waffles and ice cream. New York isn’t known for its Mexican food (as transplants from California love to point out), but new taco trucks are popping up every week.

The latest food truck trend is Korean-Mexican food. I tried a Korean burrito with kimchi, beans and cheddar cheese, and can only describe it as “interesting.”

4. The most famous landmarks of NYC. And if you like any particular place better?

Don’t leave NYC without taking the free Staten Island Ferry. The boat ride goes past the Statue of Liberty, so you can snap photos of Lady Liberty without spending a dime!

5. If you want to enjoy night time, where should you go and what should you do?

It depends on what scene you are looking for– we really do have it all. If you like chic nightclubs with $20 cocktails and the occasional celebrity, head to the Meatpacking District. I spotted John Mayer there last week after stopping by The Standard hotel’s bar.

I prefer the laid-back bars in the East Village and Lower East Side, where drinks are cheaper and the crowd is more casual. Another alternative to the pricey hotel bars is Me Bar in Koreatown. The roof-top lounge has a great view of the Empire Statue building and is near several Karaoke parlors. That practically guarantees a fun evening!

I don’t drink coffee, so I had to consult with friends on this one! Seems you can get a basic coffee from a food cart for $1 and up. We have a ton of local coffee shops and chains like Dunkin Donuts and Starbucks, which charge more. I prefer bubble tea, which costs $3-4 at shops in downtown Manhattan.

7. What is your favorite hangout place?

I love visiting Tompkins Square Park in the East Village. It’s a great place to spend a couple of hours people watching, since it draws a diverse crowd of 20-somethings, dog owners, families and homeless people. There is a large dog run with the cutest canines I’ve ever seen, and the park hosts many art and cultural festivals.

8. What transportation is the best way to wander around the city?

Definitely the subway! It goes almost anywhere you’d want to visit and is open 24 hours. A one-way fare costs $2.50. New Yorkers are also known as avid walkers. Walking is a great way to discover local restaurants and spot street art.

I’m sure you can find a place to worship any religion in the five boroughs of New York City. There is a large Catholic population and the city has the second largest Jewish population in the world. My neighborhood has a devoted group of Hare Krishnas that walks through the streets singing. All are welcome here 🙂

10. If you are traveling to NYC, you are not going out without…

Money! Hotels are expensive here (upwards of $200 a night); dining out is relatively cheap, but drinks are pricey ($5+ for a beer and $7+ for a cocktail at a typical bar). Once you’re here, you’ll be tempted to shop. We have discount stores like Century 21 and Daffy’s, chains like Abercrombie (which is very popular with Europeans), clothing boutiques and street vendors selling art and jewelry. Yes! New Yorkers are notorious for walking quickly. We always seem to be in a rush, and we roll our eyes at tourists who stop in the middle of the street to inspect maps or gawk at skyscrapers. If you want to act like a real New Yorker, plan your route in advance so you can breeze down the sidewalk, text while walking, and scurry across the street when the traffic light is red (just make sure you check both ways for cars first).

12. If you are taking a day trip, where would you go near your city?

With temperatures soaring, you’ll want to head to the beach! It’s an easy train ride on the Long Island Railroad (LIRR) to Long Beach or Jones Beach, and you can take the New Jersey Transit to the Jersey Shore.

You can also visit one of New York City’s many parks for free art shows and music festivals. The Socrates Sculpture Park in Long Island City, Queens, has some interesting exhibits and offers a great view of the NYC skyline.

13. Your secret tip about your city

I’d recommend walking around Manhattan and exploring different neighborhoods, like the East Village (my home), the Lower East Side, Chinatown and Koreatown. You’ll see how diverse NYC is and will get a better sense of the culture than you will at a touristy attraction.

About This week’s Sister: 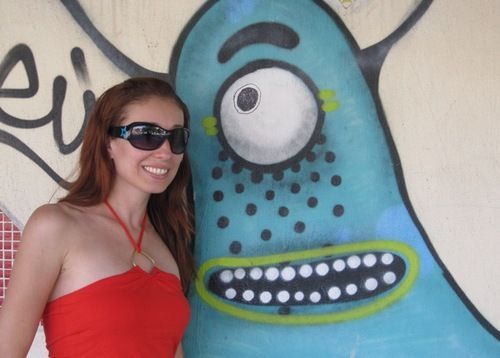 Leslie Koch is a writer and social media consultant based in New York City. She’s the founder of DowntownTraveler.com, an online magazine for city dwellers who crave arts, culture and adventure. Leslie left a corporate marketing career in June 2008 to backpack around the world with her fiance (now husband). They visited 17 countries on five continents and blogged about the experience. Follow her on Twitter at @downtowntravel and on Facebook at downtowntraveler.