Greece always has been my dream destination. So many reasons… The Greek myth that is related to the constellations in the sky, I used to memorize all the details and make stories out of the stars (Zeus and all that stuff). It came handy when I worked at the observatory as a star-guide. And how can I not mention ‘Mamma Mia!’? The creating process blew my mind, and also the story was solid. Just in case if you haven’t connect the dot: Mamma Mia takes place in Greece. Also my loving it-hate it movie ‘Sisterhood of the traveling pants’ takes place in Greece. Ever since one of my friend took me to this Greek restaurant in Seoul, Greek food became one of my favourite, especially the stuffed-vine-leaves (Dolmadakia, hope I’m spelling it right) and the yogurt soup. When I was in New Zealand in 2004, my friend Diana introduced the heavenly Greek yogurt to me. Even in New Zealand, the capital of dairy product, Greek style yogurt considered the best kind. A dentist I visited last year in Philadelphia was from Athens, and she insisted me to contact her parents to show me around.

So many signs. Yet, I haven’t been to Greece. It was my number one destination during my Runaway Europe trip, but the time I had didn’t allow me to travel that far. Natali and I supposed to meet in Athens in November and celebrate our birthday together. We have very similar birthdays! But I had to push the plan for another chance. Even though I didn’t go myself, I’m happy to learn about Athens through Natali’s eyes.

I have lived in Athens from birth to 23 years of age and I have also been living here for the past 5 ½ years.  As to whether I consider Athens to be my home, I will give you the same answer as Socrates, the famous Athenian philosopher: “I am not an Athenian or a Greek, but a citizen of the world.”

My favourite months are April, May, end of September and October.  It is too hot to be in Athens during the summer months (June to September), although some people like it because locals desert the city by flocking to the islands and the streets and avenues, especially in August, are completely empty. In April and May, it is rather warm but not incredibly hot, the parks are green, full of blossoming flowers and it is also a good opportunity to catch some of the Easter festivities, which are celebrated outdoors (those with a garden will roast lamb on the spit). Note that most of the times, the Greek Orthodox Easter will be celebrated on a different date from the Catholic Easter in the rest of Europe. This year (2013), it will be celebrated on May 5th.    Crazy, ha?

I like how Athens can be warm and pleasant even at the heart of winter.  For example, it can be freezing with sub-zero temperatures everywhere else in Europe, but here, temperatures are always rather mild. Today, Jan 10th, it is 12 C, sunny with blue skies.

What I don’t like about Athens, is its crazier than crazy traffic, the air pollution, the narrow and sometimes dangerous pavements and the littering. In some neighbourhoods, there’s just too much of it.

The first things a tourist will order are a moussaka dish (made from layering eggplans, potatoes or other vegetables with a spiced meat filling topped off with a creamy béchamel sauce) and a Greek salad (which we call it ‘village salad’ instead) with tomatoes, cucumbers, green bell peppers, onions, feta cheese (yummy!), olives, salt, oregano and plenty of olive oil.  You can accompany your food with a selection of Greek wines or beers. The most famous Greek beers are Mythos and Fix.

If you are looking for something lighter you can have ouzo (an anise-flavored aperitif) with a meze (an assortment of small dishes, our own tapas if you will). They can be just about anything: cheese, salamis, octopus, olives, feta cheese, meat, tzatziki (a dip), etc.

If you are in a hurry and don’t have time to sit down and enjoy your meal, grab a souvlaki (small chunks of chicken or pork meat on a skewer) or a pita souvlaki (meat garnished with sliced tomatoes, onions, lettuce, fries and tzatziki sauce, wrapped in a lightly grilled pita)


Are you coming by plane? Then you can catch the underground from the airport too. Jump on the blue line, all the way to Monastiraki (that’s 13 stops away). You are now at the heart of the touristy area, right next to the most picturesque neighbourhood of Athens, Plaka, and everything is within walking distance. From here, you can go visit the Acropolis, its museum, or the ancient Agora, you can admire the neo-classical buildings or get lost in the small winding roads of Plaka, with its quaint galleries and tiny museums, you can go shopping at the many souvenir shops (some haggling will be needed), or sit down at the open air tavernas to have some Greek food, at the foot of the Acropolis, while being serenaded by local musicians.

Are you coming by boat? Then you can catch the train to Monastiraki from the port too (that’s 7 stops away).

A very beautiful day trip is Sounio. You can get there by bus or you can rent a car.  Sounio is a promontory, overlooking the Aegean Sea, located at the southernmost tip of the peninsula, about 70km away from Athens. The scenic drive along the littoral coast of Attica will not disappoint you. Sounio, is also home to the famous Temple of Poseidon (God of the Sea), built around 440 BC.  Make sure you get there in time to admire the spectacular sunset, overlooking the Aegean Sea, surrounded by ruins that date thousands of years.

The one and only Parthenon, temple of the Acropolis, constructed in the 5th c. BC., during the Golden Age of Athens, dedicated to Goddess Athena (Goddess of Wisdom).   It is one of my favourite landmarks in the world, as it represents the apogee of Ancient Greek civilization and artistic development.


There are many hangout places, sadly not so secret anymore. In the summer, I like to take refuge in the café of the National Gardens, a small oasis amidst the concrete jungle.  In the evening, I like to climb up the stone-cut steps leading to the rock of Areios Pagos, not far from the rock of the Acropolis.  This is a place of great history but also one of the best places to catch an excellent view of Plaka, Monastiraki and the entire city. This place is especially popular among couples who come here at night to enjoy the lights of the city.  Another way to admire the city from above is by catching the funicular railway to Mount Lycabettus, a hill opposite the Acropolis. You can easily combine this with drinks at the wealthy neighbourhood of Kolonaki.

When I feel like seeing a bit of sea, I catch the train down to Faliro (one stop before the port) and sip a piña colada at the Sailing Club.  In the summer, I also like to enjoy the few clean beaches, outside of Athens.

You can go hiking at the nearby mountain of Parnitha, but if you feel slightly more adventurous, you can get down to the port and catch the first ferry to Egina island, less than an hour away! Egina is considered by many an extended neighbourhood of Athens, as many Athenians who have taken refuge there commute to the capital on a daily basis. If it’s more than 25 C outside (that’s 8 months out of 12), you can take your bathing suit too.


About 3.00 to 3.50 EUR. Due to the current financial crisis, it is possible to drink your coffee for even less than that, in some places.

Athens boasts a National Observatory too. While its headquarters are in the city center, there is a station up in the mountains of Penteli too. The one in Penteli is open to the public and they like to organise lectures and night observing sessions with their telescopes twice per month.

If you are visiting Athens in late spring, summer or early autumn, do not forget to immerse yourself in its 100-year old tradition of open-air cinemas. Watching a movie in an outdoor cinema in Athens is an experience. The lights go down, the beers are chilled and the familiar smell of jasmine invades the atmosphere, while the starry sky is your companion for the night. What is more, foreign films in Greece are subtitled, so you will not have any trouble watching your favourite film in the cinema. Open-air cinemas are a beloved Greek tradition and there are dozens of them in every neighbourhood. For tourists, I recommend Cine Paris, at the heart of the city’s most picturesque neighbourhood, Plaka.  Right at the foot of the Acropolis, you are in the perfect spot to watch the sun set over the holy rock of Acropolis, right before the opening titles of your favourite film commence.  Open-air cinemas are open from early May to mid-October and luckily, there is even an app available for iPhones now, about open-air cinemas in Athens.

Every Tuesday, the Municipality of Athens participates in an initiative called “Athens We Go Out” where cooperating bars and restaurants offer special prices to its residents and tourists, visiting the historical and commercial center of Athens. A menu is offered for 10 Euros, coffee for 2 euros, an alcoholic drink for 5 euros and a bottle of wine for 12 euros.  The initiative lasted until the end of 2012 and a new date for “cheap Tuesdays” is expected to be announced again soon. 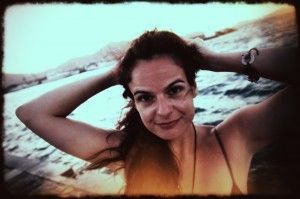 Natali is a freelance writer and a translator living in Athens, GR. She is a member of the European Association of Journalists and owner and founder of Worlds of Words, an agency offering translation services in over 50 languages. As a writer, she has written for BootsN’All, Baltic Outlook, Oryx, JetAway, FHM and for a variety of websites. She is in love with modern Japanese literature, speaks 5 European languages, loves distant cultures and cannot wait to be on an airplane again. Read her blog Language and Travel.