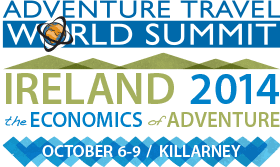 After visiting Mexico for two weeks, Korea for two and a half week, and Hong Kong for five days, I’m finally back in Kota Kinabalu, my adopted home. I have to admit, I was so happy traveling in the ‘normal’ climate for a while. But ah, home sweet home, I can’t stop sweating.

I’m off to Ireland!

It’s my first time visiting this beautiful country! I’m working for Adventure Travel Summit 2014 (#2014ATWS) with the beautiful people at ATTA in Killarney, Ireland. I will be reporting the beauty of Ireland through RunawayJuno.com, and Twitter, Facebook, Instagram @RunawayJuno as one of #2014ATWS’s official storyteller.

For the first five days, I’ll be traveling in the Westport, voted as one of the best place to live in Ireland! Westport is called “The Venice of the West”, because of its array of wonders. The itinerary includes walking in Clew Bay, hiking in Croagh Patrick, cycling along Western Greenway, and visiting some beautiful historic sites such as Westport House.

I’ll be tweeting, instagramming, and facebooking a lot about Ireland for next two weeks. The coastline of Ireland was one of the reasons why I wanted to visit this country (and meeting leprechaun who can grant me a wish) and I’m happy the opportunity came early. Ireland is also one of the root places of storytelling. I’ve heard so much about pup culture in Ireland, I’m excited to be a part of it. Single molt Scotch Whisky has been my favorite liquor after visiting Scotland this January, and I’m planning to compare and contrast differences between Irish whiskey and Scotch whisky. And of course there’s the Guinness! I’m talking awful a lot about drinks, aren’t I?…

I’m leaving today, and will be starting my journey from September 30 till October 13. I’ll be in Dublin, Westport, Killarney for the first 10 days, and will have 3 extra days in Dublin between October 10-13. Drop me a line if you are around, and if you have any tips on what not to miss in Dublin, or Ireland!

Somehow I keep picturing Irish pub as in Medieval time. I don’t know why but the images in my head looks great!

#If you are following me on Twitter @RunawayJuno , and you should :), I’ll be tweeting a lot about Ireland for next two weeks as a part of my official duty. My apologize in advance in excessive tweeting, and hope you enjoy exploring this beautiful country with me!