The Poor Man’s Galapagos isn’t so poor after all

Always wanting to go to the Galapagos but too expensive? Put Ballestas Islands as your alternative.

A group of 12 islands off of the coast of Paracas, the Ballestas Islands is one of the highlights of the Pisco region due to its easy accessibility and cheap tour price. Composed of rock formations, these islands are an important sanctuary for marine life. It’s a home to blue-footed booby, Humboldt penguins, sea lions, Inca terns, and more. The $17 tour lasts about two hours. Wildlife encounter is guaranteed.

We set off to Ballestas Islands with warm greetings by thousands of pelicans. I’ve never seen this many pelicans at one place. Several boats were already full, showing how popular this tour is. Just a short ride away, we were able to see thousands of gray dots on the hillside of an island, with the strong stench of guano.

One more interesting things about Ballestas Islands is that collecting guano is a very important business for Peruvians. As one of the best fertilizer, guano makes a lucrative business. The government collects the guano every 5-8 years. I could only imagine how much it would be, considering how many birds live here. Wow. Certainly, there are lots of ways to make money.

As promised, there were penguins! Sometimes it’s hard to believe that penguins live somewhere other than ice. Humboldt penguins nest on islands and rocky coasts, burrowing holes in guano. Sea lions were sleeping, playing, or feeding on the rocks. We got really close, so we could almost hear they talk. Boobies! Boobie’s blue foot wasn’t so obvious from the angle we were at, but I was happy to see them for the first time. It was such a rich experience to see the marine species in their natural settings.

The tour of Ballestas Islands is not just seeing the rich marine life, but also the only way to see the mysterious feature. Well known as the Paracas Candelabra, or Candelabra of the Andes is a prehistoric geoglyph. The design is cut two feet into the soil, is 595 feet tall. No one knows the origin of this marker, but archaeologists found pottery around the site dating back to 200 BC. How can this simple geoglyph last for over 2,000 years, we haven’t figured out yet?

The Poor Men’s Galapagos is probably one of your best shots to see penguins in wild. Who can say no to penguins? 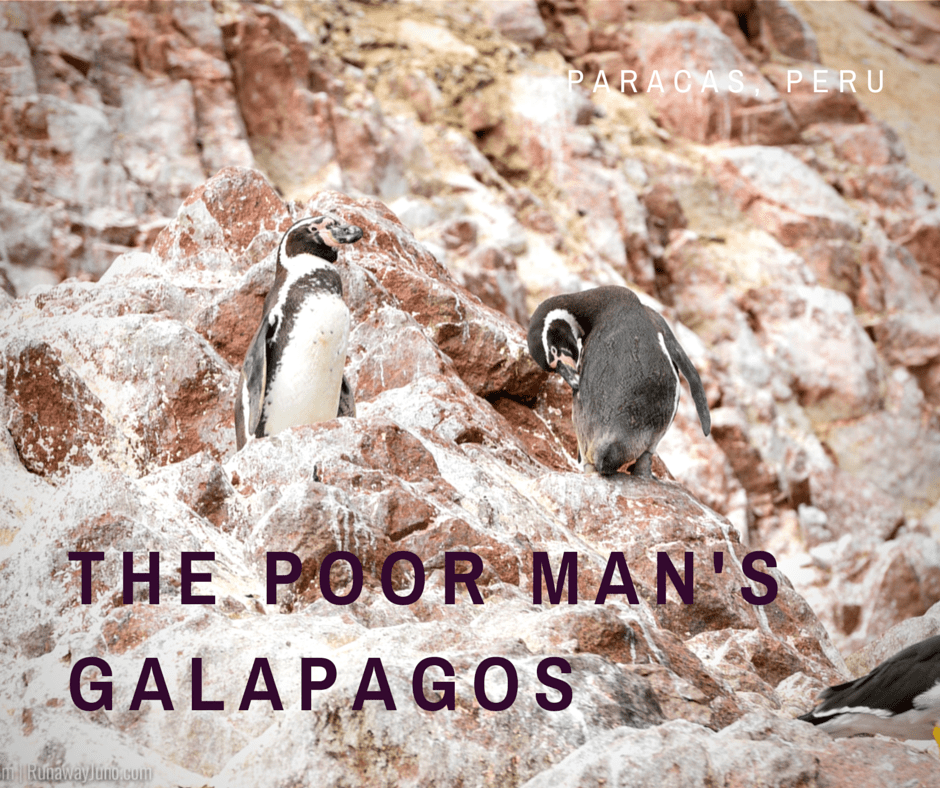