Life and Death, It’s All Part of a Life: Visiting Pashupatinath Hindu Temple

What can you expect from the most sacred Hindu temple in Nepal?

Before going into the Pashupatinath Temple, we sat in front of one of the holy men. He prayed in the name of Pashupatinath. The short blessing ceremony seemed appropriate to prepare ourselves to enter the sacred place. He blessed us with holy water, flower petals, tilaka on the forehead, and Kalava. He asked how old I was, where I was from and wished me good luck for my journey. Suddenly, I felt like I was ready to enter the holy place.

Kalava
Kalava is the sacred Hindu thread tied by a priest or an older family member, to the people attending the prayer ceremony. It goes on the right wrist of men and unmarried women and on the left of the married women. It’s made with cotton in form of yarn in red with small bits of yellow color.

Pashupatinath Temple in Kathmandu is the most sacred Hindu temple in Nepal, dedicated to Lord Shiva. It’s located on the banks Bagmati River that eventually flows into the holy river Ganges. This temple attracts hundreds of followers each year, as well as foreign visitors. It’s truly a fascinating place to visit in the city.

I could definitely feel the excitement of the followers. I’m sure a lot of people here have been planning to visit this temple for as long as they’ve lived. I felt blessed to be around with the people.

It took me a while to get used to the surroundings. Some parts of the temple weren’t open for non-Hindu people, so we just had to peek in from outside. 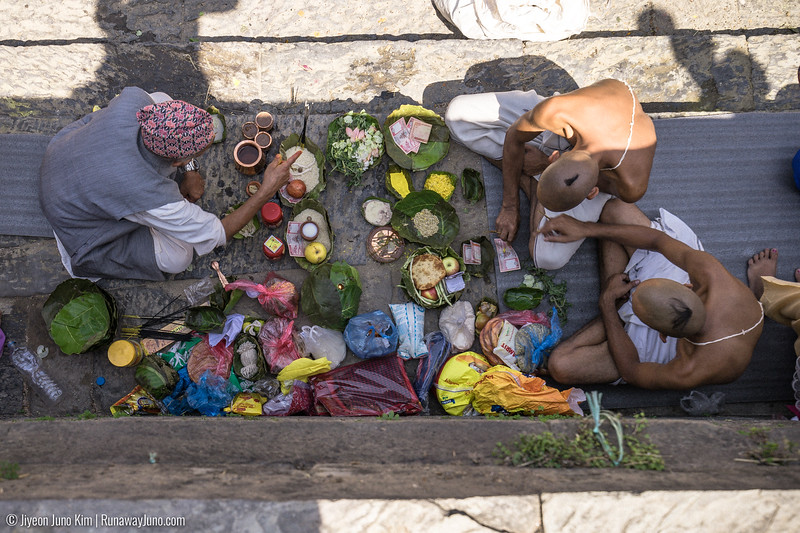 What struck me most during the visit was how life and death co-exist in great harmony in this place. Through the beautiful temple buildings, we arrived at the riverbank. This is the place for cremation, like the burning ghat of Varanasi. It was empty when we got there but the smell of burnt wood and char on the stands showed that it was recently used. We crossed the small bridge to the other side, and soon, a body wrapped in white cloth arrived. I looked away first, but I didn’t want to pass the opportunity to witness this sacred ceremony. The family members lowered the body to the river bank, uncovered the face, and washed the deceased woman’s face with the water from the holy river. They wrapped the body again and moved it to the pyre with a stack of firewood. 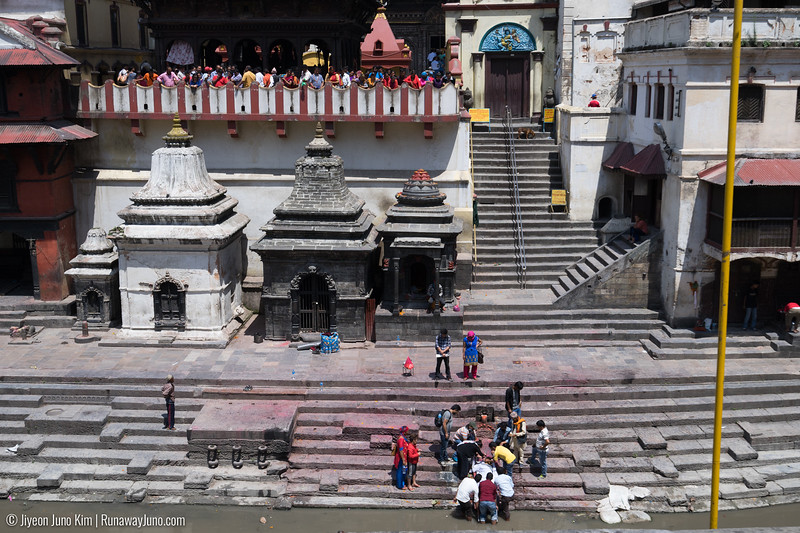 In fact, there were several cremation ceremonies happening at the same time. When the woman we saw got transferred to the other side, one pyre was already prepared to start the cremation. A man holding a flame chanted and circled around the body three times. The flame was finally placed on the body, and that was that.

The fire got big very quickly. They covered the burning wood with a stack of wet hay to create a slow burn. It was a heavy experience, watching a cremation like this. I was looking at this scene from above on the other side of the temple and suddenly realized something. There was no sadness. There was no crying. There was no, how to describe this, heaviness in the place. Unlike the ceremony I saw in Varanasi or my personal experience in Korea, the atmosphere here was a lot lighter. Kids were playing in the river, people were taking photos and where I was standing, a holy man was reading a palm. Flame and smoke from the cremation were as if I was watching someone buying groceries, just a part of the everyday scene. 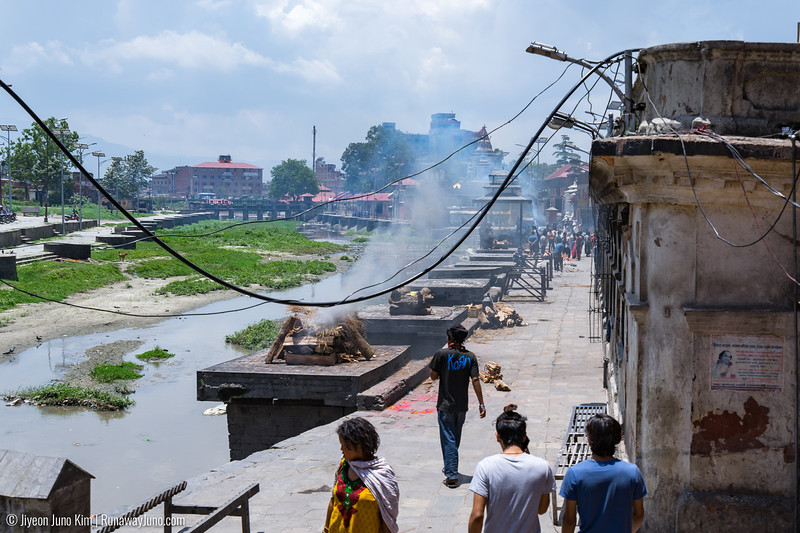 I learned later that it’s believed that those who are cremated in Pashupatinath Temple are reborn as a human, regardless of any misconduct that could worsen their karma. If you are attracted to the places where the spirit of death can be felt, then consider Pashupatinath as your first destination. Pashupatinath is a temple with a special atmosphere of death; death is present in almost every ritual and every corner of it.

One of the reasons why Hindu temples are so fascinating is because of the sadhus. Due to the religious significance of this temple, many sadhus come to Pashupathinath. Sadhus are wandering ascetic yogis in Hinduism and Jainism, who are trying to acquire liberation from the cycle of death and rebirth by meditation and contemplation of Brahman. They live in caves or tiny cells on the territory of Pashupatinath and are supported by donations from followers. Becoming a sadhu is a path followed by millions. It’s supposed to be the fourth phase of a Hindu’s life, after studies, being a father, and a pilgrim.

How to recognize a sadhu? Don’t worry, you can’t miss them. They have a unique appearance with specific yellow or white paintings on their bodies. Sadhus in Hinduism usually wear saffron-colored clothing. Many of sadhus are very friendly and eager to pose for the photos with foreigners, in exchange for a few dollars. (Tip: many of them asked for 500 Rs but we settled at 100 Rs most of the times.) It’s truly fascinating to see them up close.

Tilaka
Tilaka refers to the Hindu ritual of marking someone’s forehead with a fragrant paste, such as of sandalwood or vermilion, as a welcome and expression of honor when they arrive. In Nepal and a few other regions, it’s also called as tika, a mixture of red powder, yogurt, and grains of rice are used.

An intense afternoon at the sacred Hindu temple is a good one to remember. I grew up with Buddhism, which started from Hinduism, but Hindu culture and custom is still very foreign to me. I feel like an insider in a way but also the complexity of Hinduism is beyond my understanding. I certainly appreciated everyone for allowing non-Hindus like us to be there, be part of their lives. 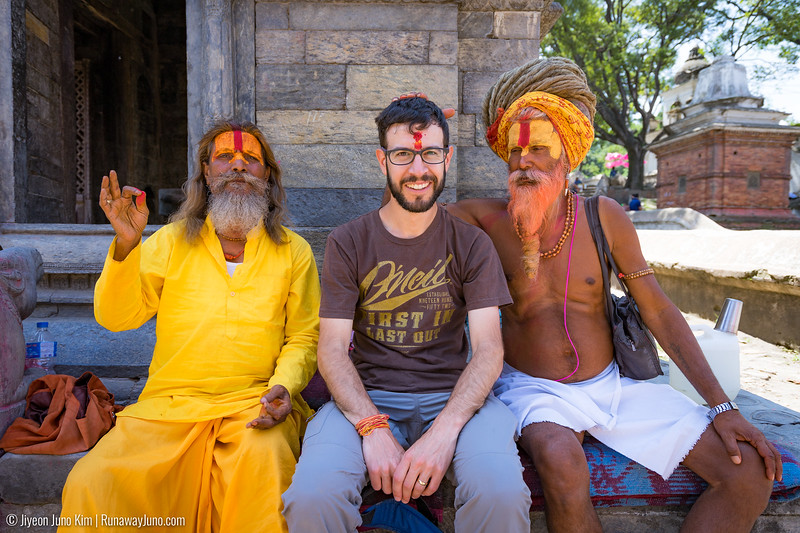 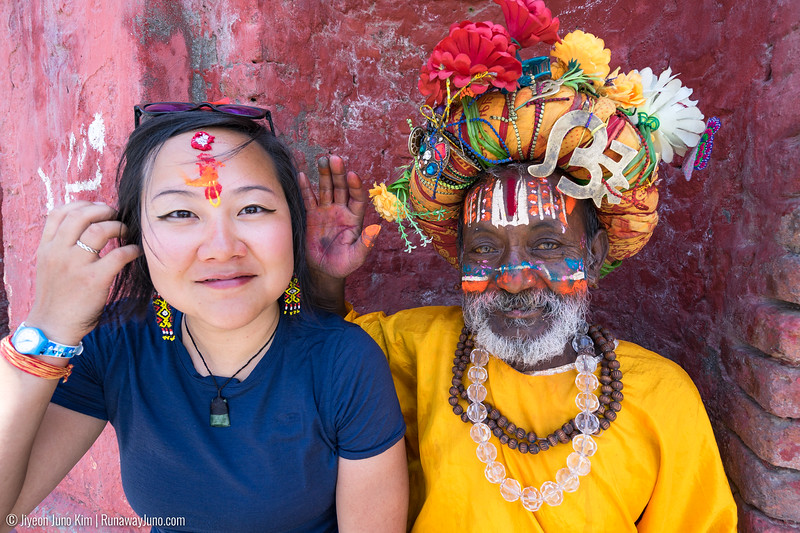 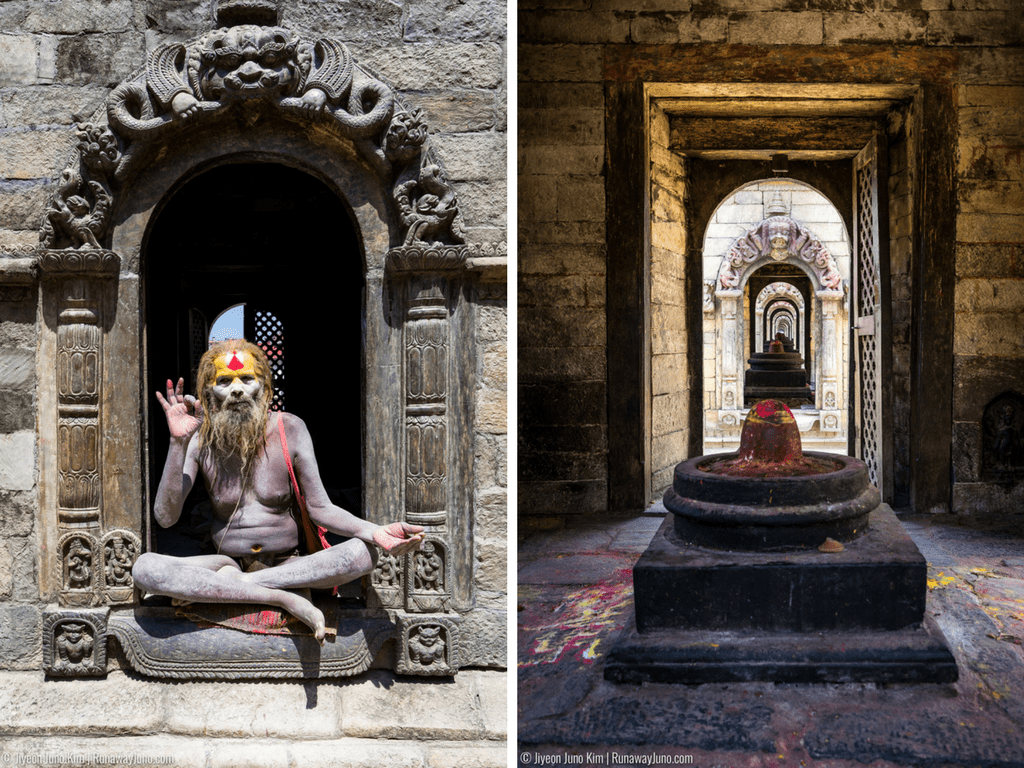 The temple is open every day from 4 AM to 9 PM but it is closed in the middle of the day between noon and 5 PM (but double check with a local tour operator or hotel to make sure). The best time to visit the temple is early in the morning or late in the evening. One should plan about two hours to visit, especially if you are planning to take lots of photos with sadhus.

How to get there: it’s best to arrange a taxi from the city. About 500 Rs would be enough to take you to the temple from anywhere in the city. You can get another taxi to come back (no need to ask them to wait). It’s very close to the airport, so it’s possible to drop by before your flight back as well.

Prepare 50 and 100 Rs banknotes if you are planning to take photos with sadhus. They will ask for more, but I thought 100 Rs was a fair deal. 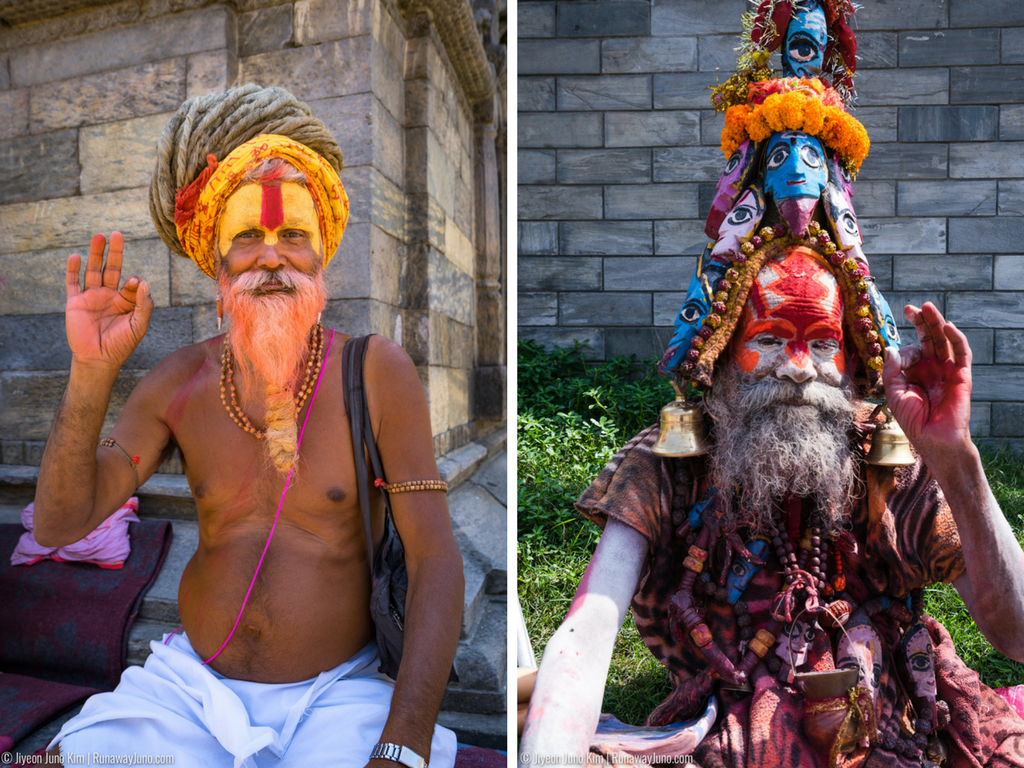 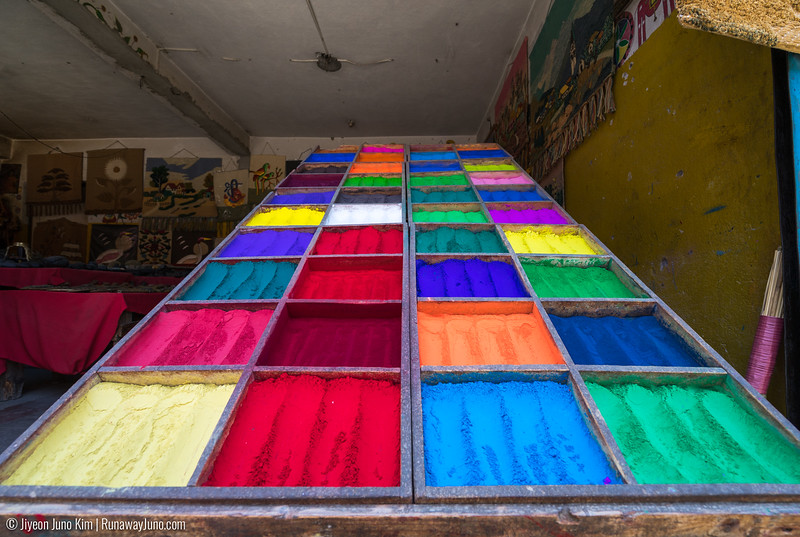 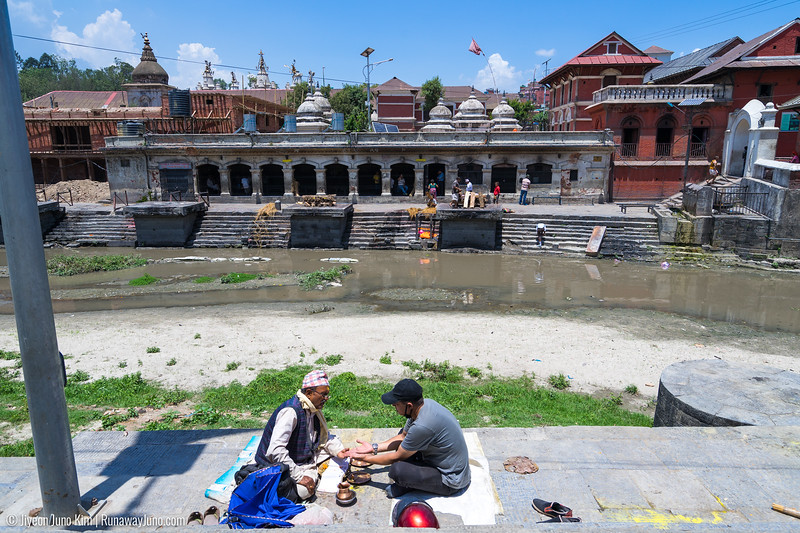 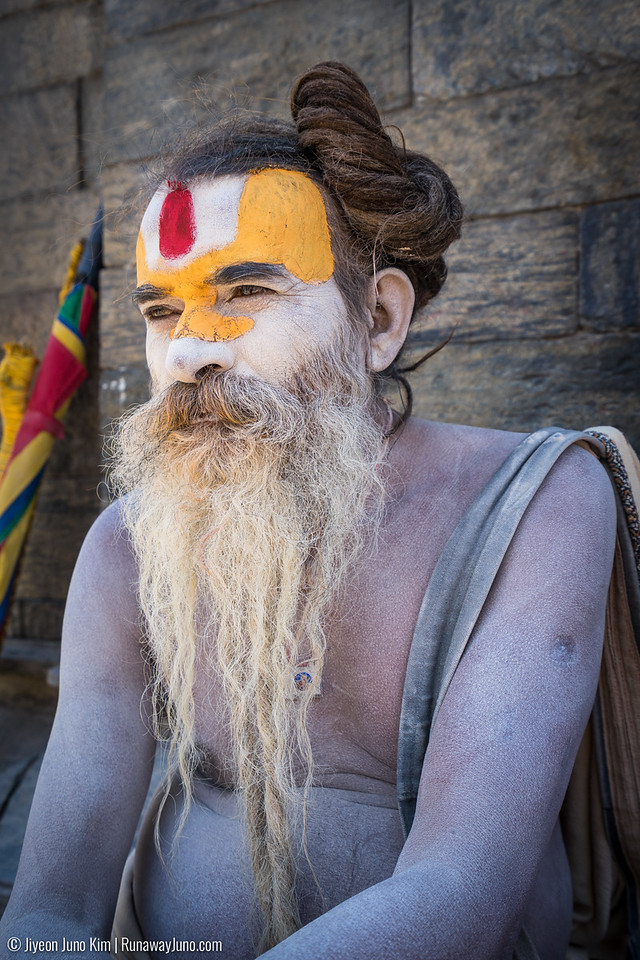 5 thoughts on “Life and Death, It’s All Part of a Life: Visiting Pashupatinath Hindu Temple”