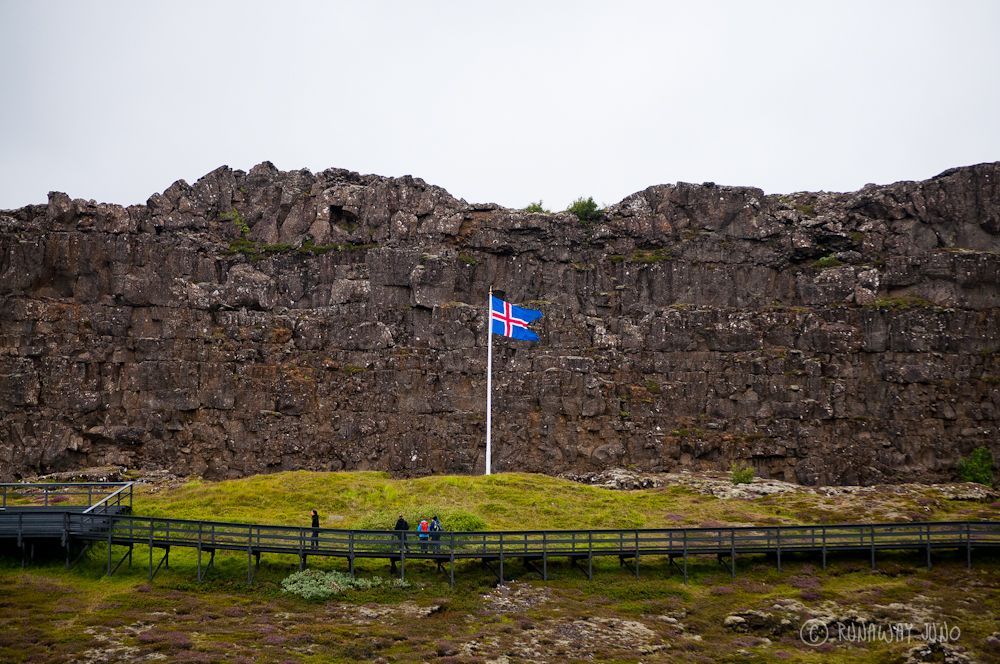 The Golden Circle is the most popular tourist attraction in Iceland. The tour route was invented about the same time when automobiles were introduced. It’s an easy day trip since it’s close from Reykjavik, continuing on route 1, route 30 and route 35. No doubt, everyone is heading to the Golden Circle one day or another. We did, on the first day on our way to south from Reykjavik. Touristy place is well-beaten for a reason. We were accompanying with a lot of tourists, but it didn’t matter with the amazing attractions infront of us. I have to say, we had a great start of our Iceland tour. Here are the highlights of the Golden Circle of Iceland.

Other than the Great Riff Valley in east Africa, Thinkgvellir National Park is the only place on earth where ‘seafloor spreading’ can be witnessed on land. Eurasian and American plates are spreading apart 7mm per year. Over 10,000 years later it will have 70m gap valley. It was quite fascinating to think that someone will look at the ‘new version’ of the world map and learn the fact that the gap was only so narrow 10,000 years ago. The power of nature is an amazing thing.

Thinkgvellir National Park is also a historic place for Iceland; the parliament was founded here and this was the place where Icelanders gathered declare the independence from Denmark. This is the first national park of Iceland, the first protected land. It was like Christmas in August! Exploding Geysir is the best not-to-miss experience in Golden Circle, even in the entire country. Geysir was the first tourist spot in Iceland. You’ll see why when you get there. The Geysir water explosion was used to be 70m high, but it stopped in 2005. Instead, Strokkur is not the point of the interest. The natural phenomenon is happening every 5 – 7 minutes with 25m high explosion. The explosion is different every time though.

Not just that, there are plenty of other natural springs around the area. Everyone shows different colours due to the different composition of the mineral. Milky blue and deep blue hot spring were hard to believe that is just a pure nature. In Gullfoss, ‘golden falls’ in Icelandic, has three separated levels, divided by two separate cascades that fall perpendicular to one another. The upper fall is 11m high and the lower one is 21m. This magnificent waterfall was in danger to be destroyed by British developers and saved by the farmer who owned the land at the time. His daughter spent rest of her life to save this place. You can see her memorial at this place.

You can walk along the side of the waterfall, but be careful; you’ll be soaking wet. I don’t remember when I was this close to the waterfall; probably never.