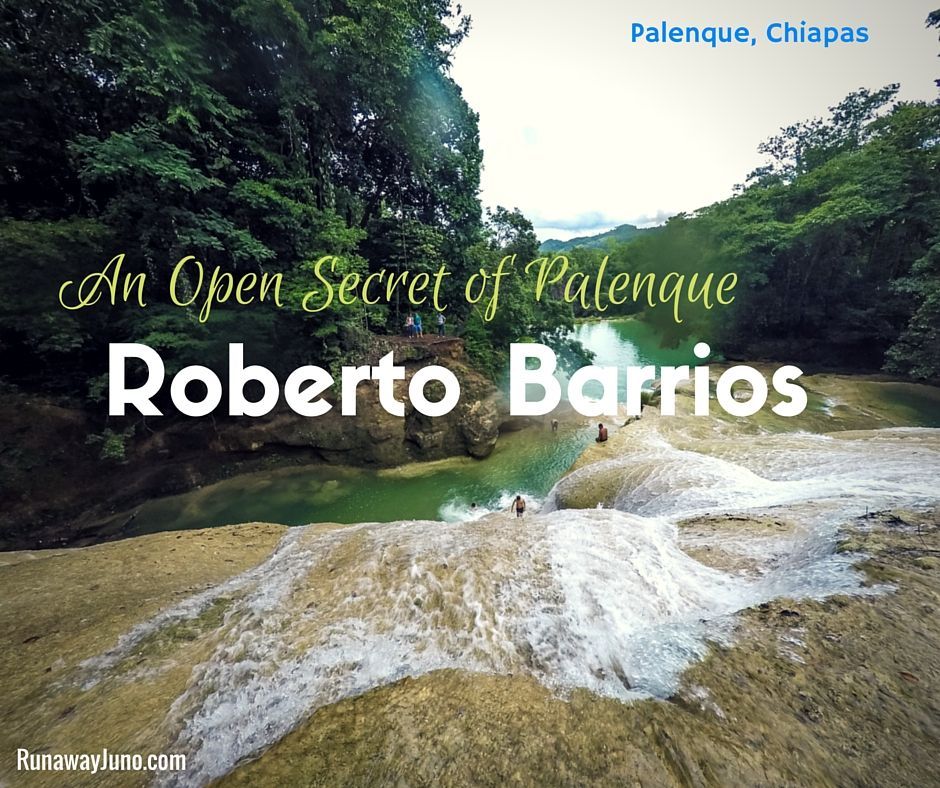 After spending an afternoon in the jungle of Palenque, what do you do?

You’re soaking wet from sweating, and the air is so thick and heavy it’s hard to even breathe deep. On a day like this, there’s nothing like swimming in the waterfalls.

Other than visiting ruins of Palenque, I didn’t have much plan for my extra day in town. There’s not much to see in the city center, so I thought I would just hangout in the hotel and catch up some email. Life of a digital nomad, huh? Then, my friend Garrett who went to the ruins with us mentioned about this off the beaten path waterfall. Among all the waterfalls in the area, Aqua Azul holds the fame, and decided not to go because I wasn’t sure I could handle the crowd on my day off. This small waterfall sounded perfect for a day like this. Craig (the man behind of StayAdventurous.com), Garrett and I changed into swimsuits and called a cab. From Palanque to Roberto Barrios, it would be a 40-min trip, one way. The road to Roberto Barrios was curved back and forth, as a lot of roads in Chiapas. Seeing the countryside of the jungle and mountain range was a nice change of scenery from the dry canyons of Guanajuato. About 20 minutes later we turned into a small road leading to Roberto Barrios. If you take a collectivo, this would be where they drop you off. 13km in, we reached the check point. There’s a small ticket booth where you have to pay 20 pesos per person. We parked the car, and walked into the Cascada de Roberto Barrios. There it was, two waterfalls side by side. The sound of boiling water and water splash was just refreshing. Is there anywhere better than this? We reached heaven. Without asking, some of the local boys told us what to do (they set up a rope to hang on), and became our guide. He jumped off the first waterfall! I would’ve done if my ankle was alright (maybe). We swam near the first waterfall but the boy wanted us to follow him. We walked about 50 meters through the jungle, and there they were, the other waterfalls. There were some locals and visitors swimming, but it was barely occupied. There’s just something so soothing about watching moving water. You can actually walk down to the next waterfall and swim through an underground cave. It would be an amazing picnic spot for a day like this.

I didn’t bring other cameras, so all the shots were taken from GoPro HERO4 SILVER

. I apologize for the big blurry water spot on the photos!

From Palenque to Roberto Barrios, taxi costs about 600-750 pesos depending on the driver and company. Collectivo is a lot cheaper but you’ll need another ride for the last 13km. Usually the driver watches the belongings while people are off to explore the waterfalls, but it’s a good idea to minimize what you bring. If you liked the local guide (usually a young boy), don’t forget to tip them!