Borobudur temple is a Buddhist temple in central Java. The name Borobudur is from the Sanskrit words biara and bidur. Biara means temple and bidur means hill; temple on the hill, it means. It was built around the end of the eighth century but it took three generations to finish it. During my two weeks trip to Indonesia, I had a chance to visit Borobudur temple at sunrise. I had a hard time getting up at 4 am, but the view and the temple were worth the trouble. The structure and meaning behind the structure are amazing. I dug a little deeper after my visit.

It’s hard to see how large the temple is on the top. The temple looks more magnificent in distance and on the way down. 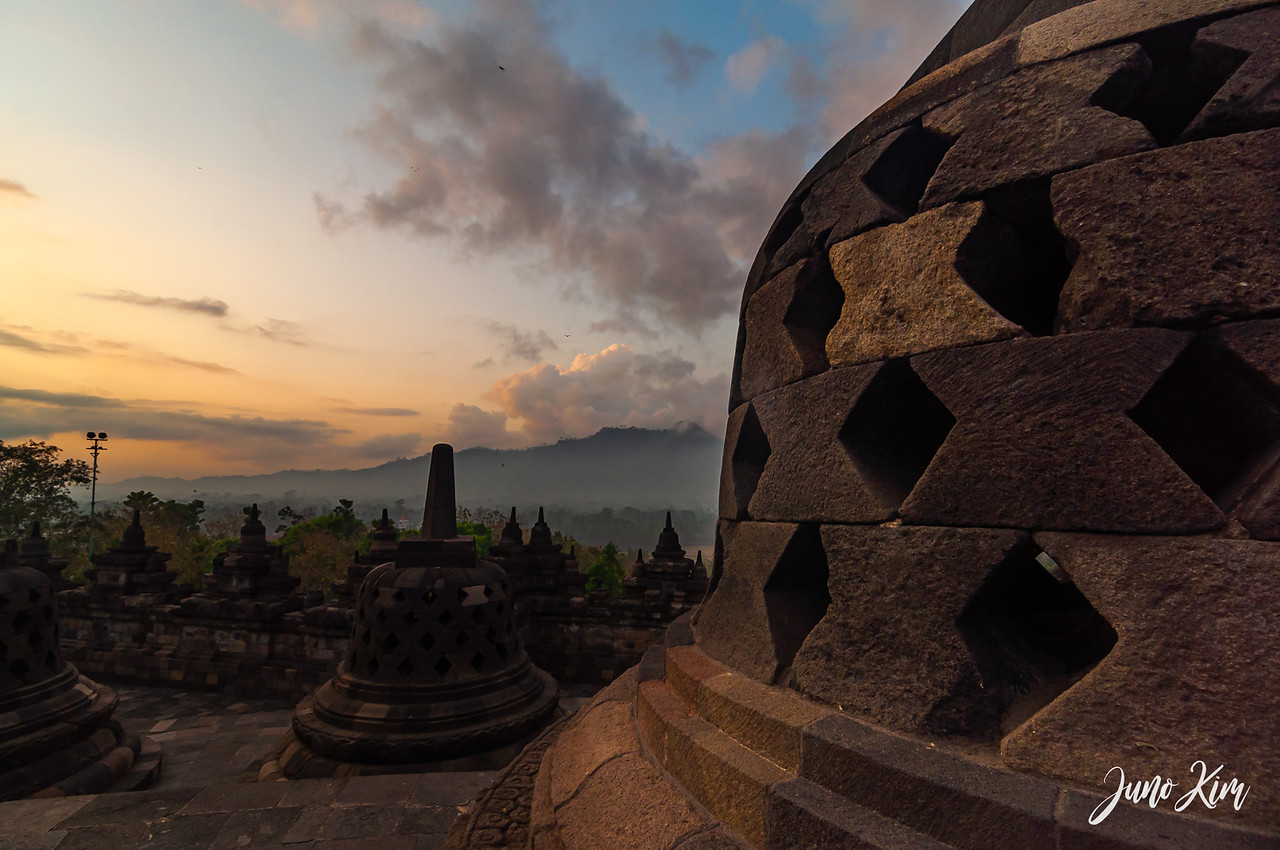 If you see Borobudur temple in the air, it looks like a lotus flower; the symbol of purity in Buddhism. The monument consists of six square platforms topped by three circular platforms and is decorated with 2,672 relief panels and 504 Buddha statues. The record says there were used to be 505 statues, but one is missing. The temple is built without any concrete, only the blocks were joined, a compact system. 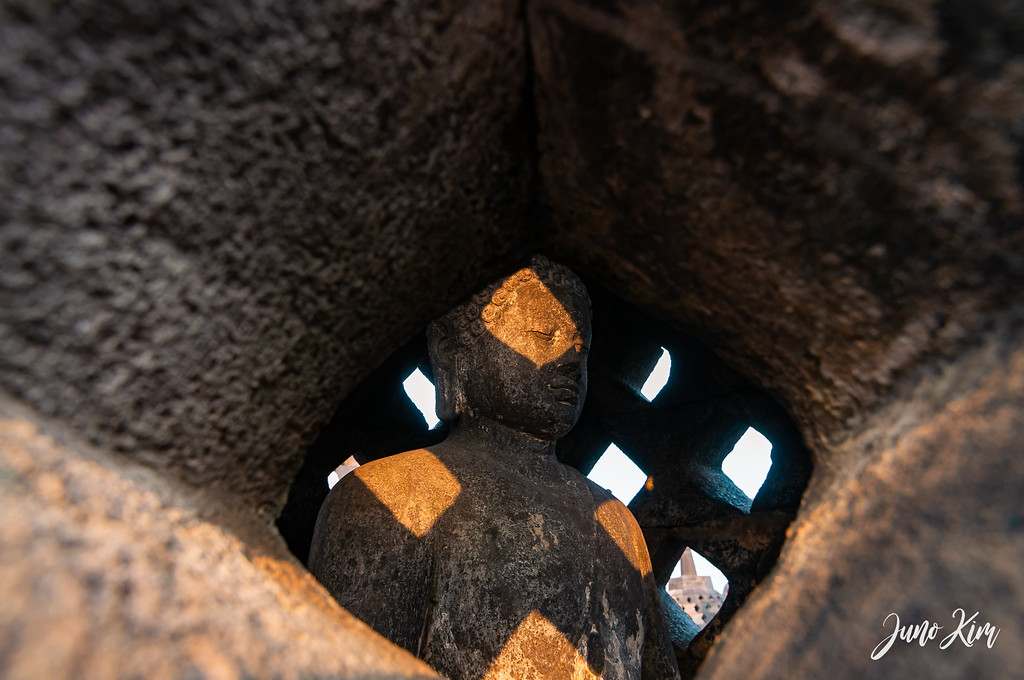 The total of 504 Buddha statues in Borobudur temple is representing six different meditative poses with their hand positions. Some of them are facing different directions. The most visible ones at the top level, around the main stupa, are representing Dharmachakra Mudra: turning the wheels of dharma (what goes around comes around).

Borobudur contains approximately 2,670 individual bas reliefs (1,460 narrative and 1,212 decorative panels), which cover the façades and balustrades. The total relief surface is 2,500 square meters (27,000 sq ft) and they are distributed at the hidden foot (Kāmadhātu) and the five square platforms (Rupadhatu).

The reliefs are showing diverse subjects: the daily life of Javanese people, mythical spiritual beings, the life of Buddha and so on. There are different stories in each level. The first four terrace walls are showcases for bas-relief sculptures. These are exquisite, considered to be the most elegant and graceful in the ancient Buddhist world. The ground level has hidden reliefs behind the wall, but you can see the part of them in the museum.

Borobudur temple was abandoned and destroyed for centuries when the center of Javanese life shifted to the East and Islam arrived on the island in the 13th and 14th centuries. Some of the Buddha statues don’t have a head because of the vandalism from other religious powers. It was also hidden under the volcanic ash and vegetation during the time. It was rediscovered by Sir Thomas Stamford Raffles, the British governor of Java at that moment in 1814. Fortunately, the restoration continued. The decline of Borobudur was arrested by tighter regulations and one of the most ambitious international preservation projects ever attempted. The “Save Borobudur” campaign was launched in 1968 through the government of Indonesia and UNESCO. The actual work began in 1974; the monument was closed to the public for ten years and it cost twenty-five million dollars and took eight years of labor to complete. 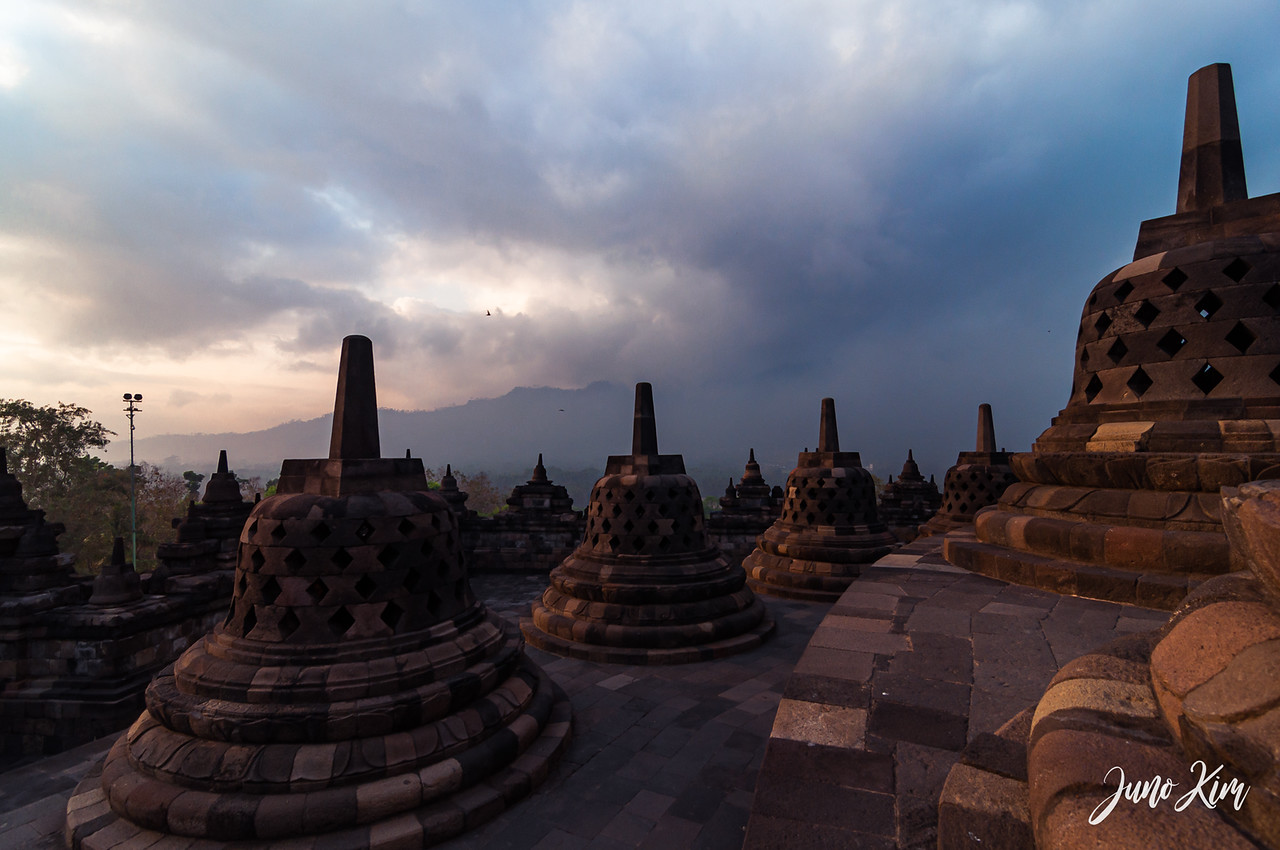 #Disclosure: My trip to Indonesia was sponsored by Indonesia.Travel as a part of #Travel2Indonesia project. However, all the contents are written & photographed by me.