I believe I inherited the blood of the northerners. Seeing the snow-covered mountains and crown snow-load trees make my heart beat faster. I feel at home in the north. I’m drawn to the landscape and culture of the Arctic. Maybe my ancestors were pioneers in the region. Well, I definitely have the facial features.

That’s why my ten days in Utsjoki, Finland in November was like a dream come true: living in a small town in Finnish Lapland that borders Norway.

Located at 69.9° N latitude, Utsjoki is a small village with 1,200 people living in the whole district, which combines three villages. Utsjoki village alone has a population of about 800. Why should you go that deep in the north and what can you do there? Well, let me tell you, winter in Utsjoki gave me some of my fondest travels memories.

The nearest airport is Ivalo. The 90-minute flight from Helsinki will take you to northern Lapland. Then Utsjoki is located another 174 km north of the airport.

In Utsjoki and other areas of northern Lapland, it’s known that 200 days a year you can see the northern lights. The only exception being the nights with the midnight sun or cloudy weather. When the solar wind, which is the source of the aurora borealis, is very strong, the light explosion is as strong as the midday sun. The snow reflects all the light, which makes it even brighter.

Sami Bridge: Be in Norway and Finland at the same time 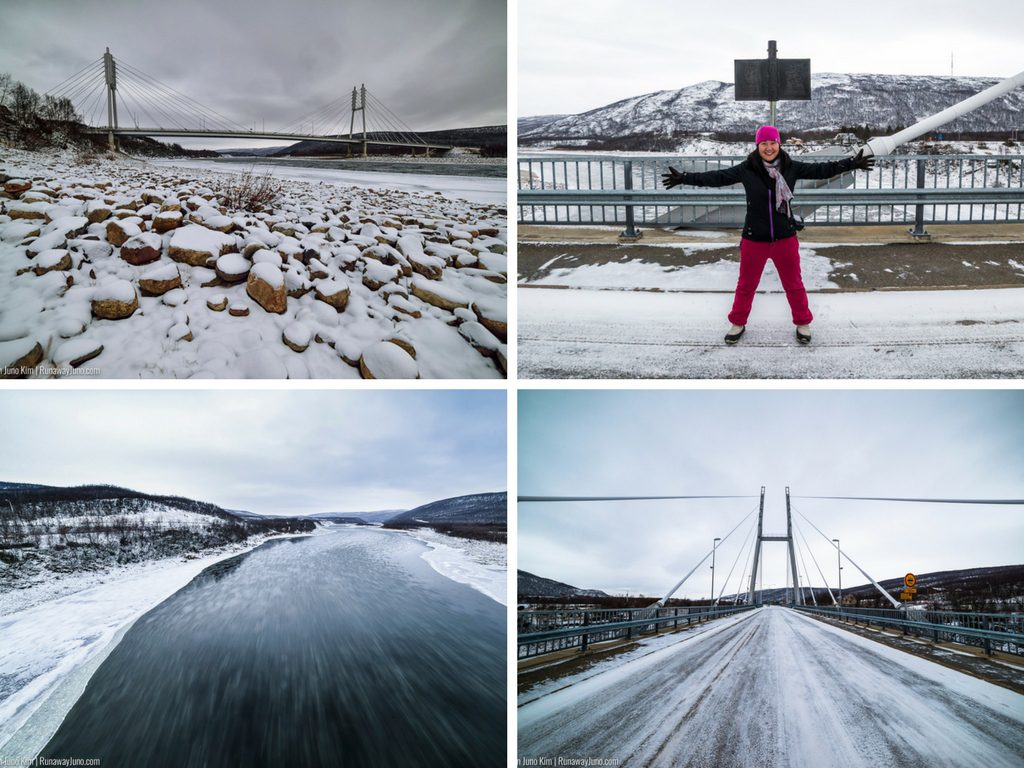 The border of Finland and Norway follows the Tana River, the name derives from ‘Great River’ in the Sami language. The river flows through Finnmark, Norway and the Sami regions of northern Scandinavia. The Sami Bridge crosses the river, which is the only major bridge of the region. The bridge is one of the of places where you can be in Norway and Finland at the same time! Looking down the great river from the bridge is also quite an experience.

The village center of Utsjoki has a few attractions, including the main church and church cottages, Kirkkotuvat in the local language. The church has the significance of being the only church owned by the government and in 2004 the government donated it to the parishioners. It was originally funded by Tsar Nicholas I of Russia.

Kirkkotuvat is the historical center of Utsjoki, where the original settlement developed. There are about 13 houses here including a marketplace and an old church. Some houses are original and some are reconstructed. They are located in a picturesque place with a beautiful view over the lake Mantojärvi. 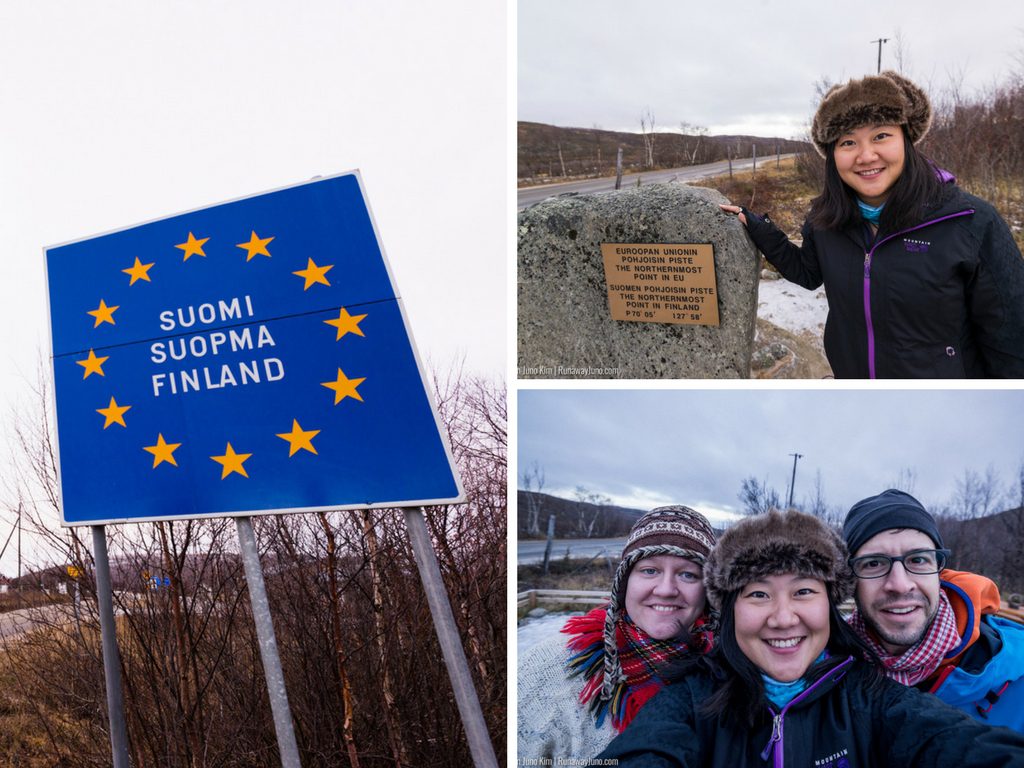 Have you wondered where is the northernmost place in the European Union? Here’s the answer: Nuorgam, Finland. It’s right on the border between Norway and Finland.

The National Museum of the Finnish Sami is a great place to start learning and understanding the culture and life of Sami people. The museum stores the spiritual and material culture of the Finnish Sami. The building itself was built in a way to adopt the natural surroundings of the region. The open-air museum that features a Sami’s home life opens in summer.

The National Museum of the Finnish Sami is located in Inari on the way from Ivalo Airport to Utsjoki, so I suggest you make this as a first stop.

For Sami people, the international border is just an artificial line drawn by governments. They might have the formal document identifying them as a Finnish or Norwegian, but it is all just land of Sami for people from this region. Traveling between Finnmark and Lapland is a daily routine for many living in the area. While staying in Utsjoki we also crossed the Tana River almost every day while touring the area. 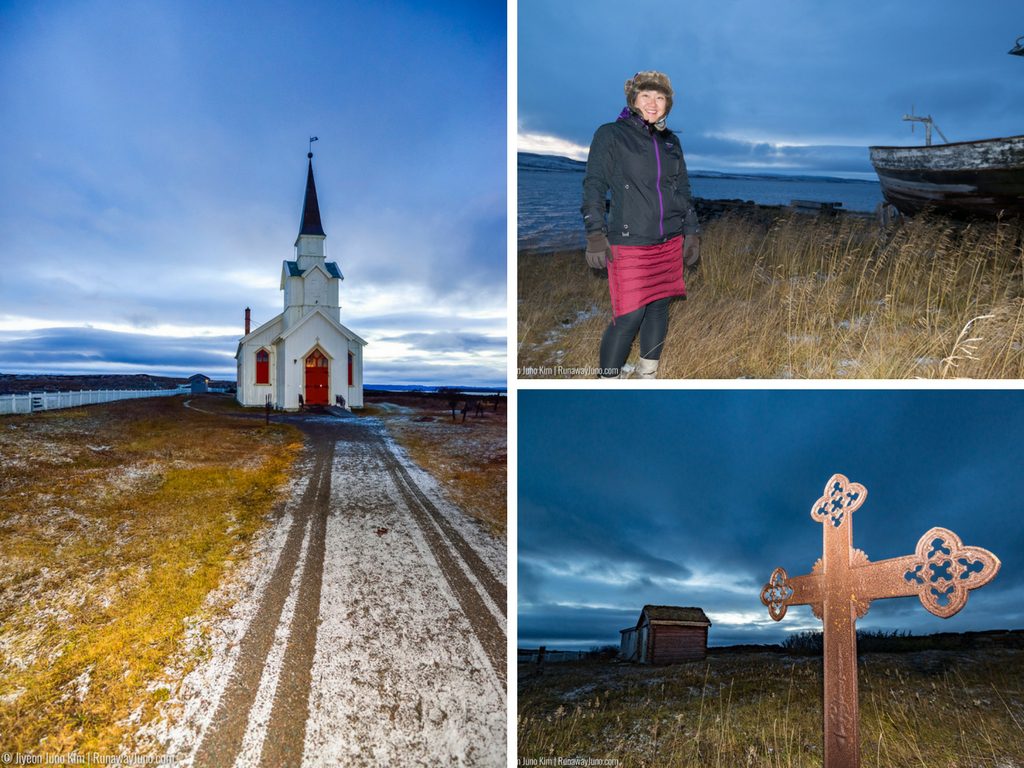 It was like seeing a scene from a Viking movie. The tall Nesseby Church is located on a peninsula in the village of Nesseby, overlooking the Varangerfjorden Fjord. It was built in 1858 and restored in 1983. There is located what is believed to be the oldest chapel in Varanger Peninsula, from the 1700s.

We crossed the Sami Bridge to Tana many times during our trip. One morning we met a group of amazing husky dogs at Dag’s Tana Husky! It was an unseasonably warm winter so we had to run with wheels but the thrill was real. The energy of husky dogs is always amazing to experience. Dag is a talented man, he trains husky dogs as well as teaches at a local school as a music teacher. Contact me if you want to experience the husky dog sledding with Dag! 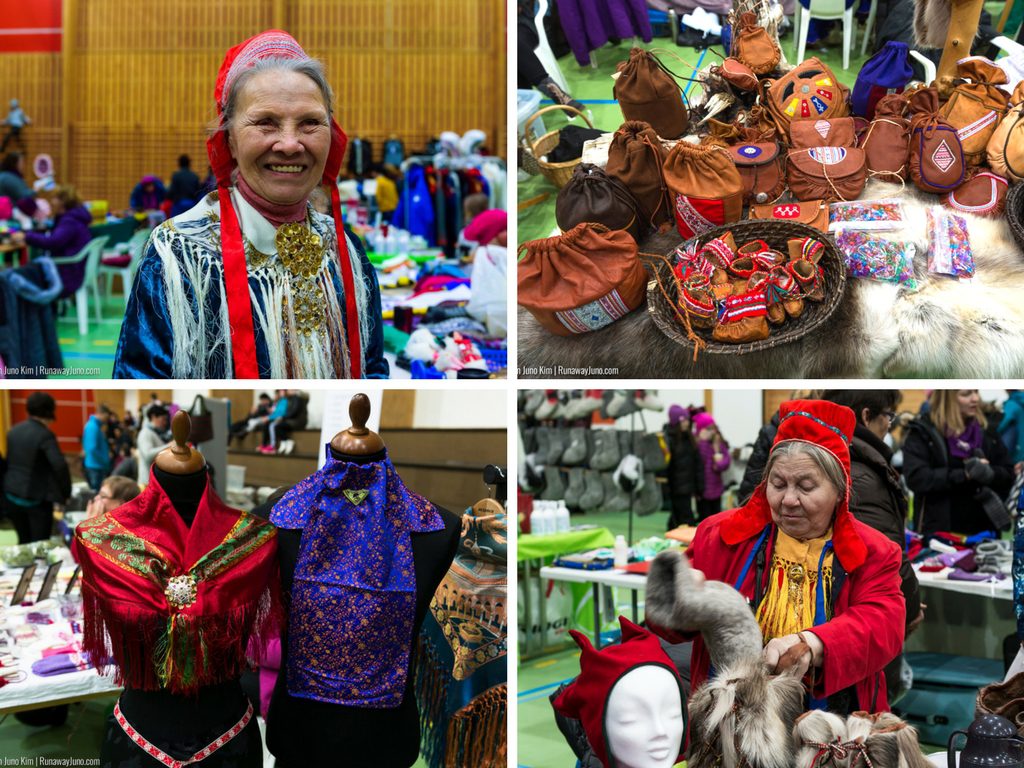 To get high-quality hand-made Sami crafts, visit the monthly market in Karasjok. We were lucky to be in the area on the day. We drove about 2 hours (115km) to reach Karasjok from Utsjoki, along the scenic Tana River. Karasjok is considered to be the Norway Sami’s capital where the traditional lifestyle is still very much alive.

We finally saw the reindeer skin shoes that we saw in the Sami Museum and other great reindeer skin products. Our friend Emilia got a pair for herself! I got a pair of knitted mittens in Sami colors and a small reindeer leather pouch. I loved seeing all the traditional clothing that people were wearing. There was a cafeteria for lunch, serving none other than reindeer meat!

One night, while chasing the aurora lights, we landed in Lakselv, at the southern end of the Porsangerfjorden Fjord. We spent a few hours around the region, following the clear sky. We only saw this place at night, but I can imagine how beautiful it would be during the daytime.

1 thought on “Life in Utsjoki: A Town in Finnish Lapland Bordering Norway”