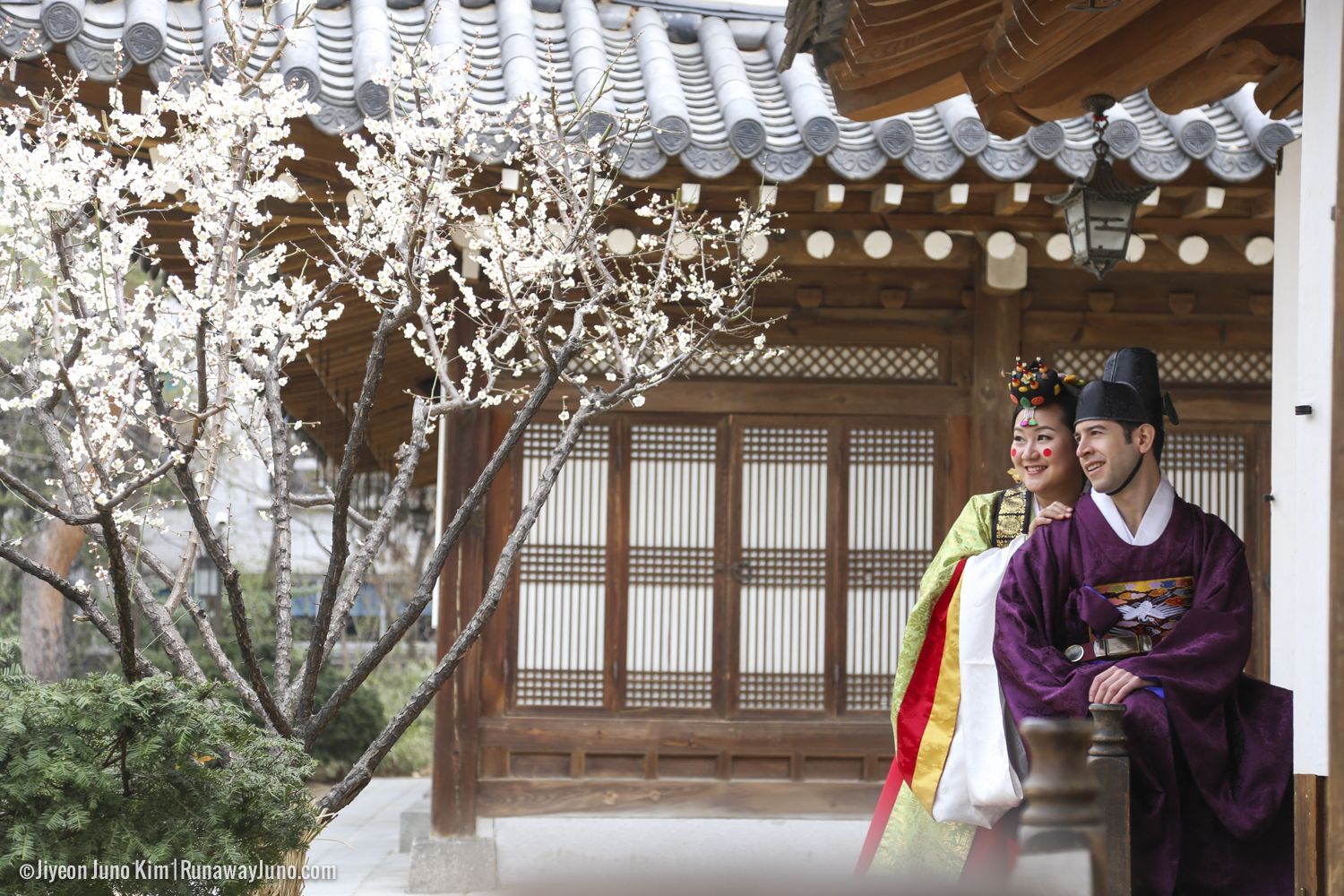 Korean traditional wedding ceremony is full of colors and excitements. Fifty and some shades of colors in the traditional house’s courtyard and traditional live music have a power to make you dance in your heart. Even though we have this valuable tradition, for certain period of time, having a traditional wedding was considered old-fashioned. Koreans were focused on modernization. But now, Korean wedding is reclaiming the glory. Getting out of the western-style wedding, now lots of couples choose to be married in the traditional setting. Of course the much increased amount of international marriage is another reason of the popularity.

Every little detail in the traditional ceremony means something. The dress, accessories, position, food, and even all the bowing and drinking indicate something.

The ceremony itself takes about a half an hour, but there will be celebratory performances before, and photo shoot, and dining after the ceremony. Our ceremony at Korea House took about two hours including everything. The details of ceremony can be different depending on the host, but the core program would be the same.

Here is the complete guide to Korean traditional wedding ceremony.

-The girukabi hands the geese to groom.

-Groom place wild geese on a table and bowing twice to his mother-in-law.

-Mother-in-law takes the wild geese into the house.

*The wild geese symbolizes harmony and love between husband and wife. Wild geese (it’s actually mandarin duck, to be exact) mate for life: they keep their promises of love and never find another, if they lost their partner.

*Wooden geese is used nowadays, instead of the live one.

Gyo-bae-rye(交拜禮): Facing each other and bowing

-The groom stands on the east, and bride walks to the west side of the wedding table.

-The helpers spread the mat on the yard for each other.

-Groom bows, then the bride and groom stand on the mat, facing each other (bride holds her hands to cover her face).

-First, bride bows twice and groom bows back once.

-Bride bows twice again, then groom makes a deep bow and kneel down.

*The bowing represents the promise of commitment to each other.

*Bride’s bow is required to sit cross-legged on the floor and stand up. That’s why the helpers are the must!

*In the olden days when arrange marriage was the custom, the wedding ceremony was the first time bride and groom saw each other’s faces.

-The helpers of bride and groom prepare drink (usually rice wine) and side dishes.

-The groom bows, then bride and groom present drink and side dishes to the sky (to the greater existence who’s looking down on everyone).

-The helpers pour the drink. After groom bows, bride and groom raise their cup.

-The helpers fill the cup which made of gourd dipper and groom bows.

*The two halves of gourd dipper represent the bride and groom to be one whole with one another.

-Bride and groom bows to both families and guests.

-Bride and groom, and with friends and families

-For the ceremony, the bride’s family prepared jujubes (Korean dates) and chestnuts, which symbolize children.

-The ceremony begins with the parents (of groom) seated on cushions behind a table in front of a painted screen, with the newlyweds opposite them.

-The newlyweds perform a deep bow.

-The parents then shares some wisdom on marriage from their advanced experience.

-Finally they will throw the jujubes and chestnuts back at the couple, who has to try catching them with her wedding skirt.

*Traditionally pyebaek is only for groom’s family, but bride’s family also participates in modern weddings.

#All the photos were taken by our wedding photographer from Korea House.