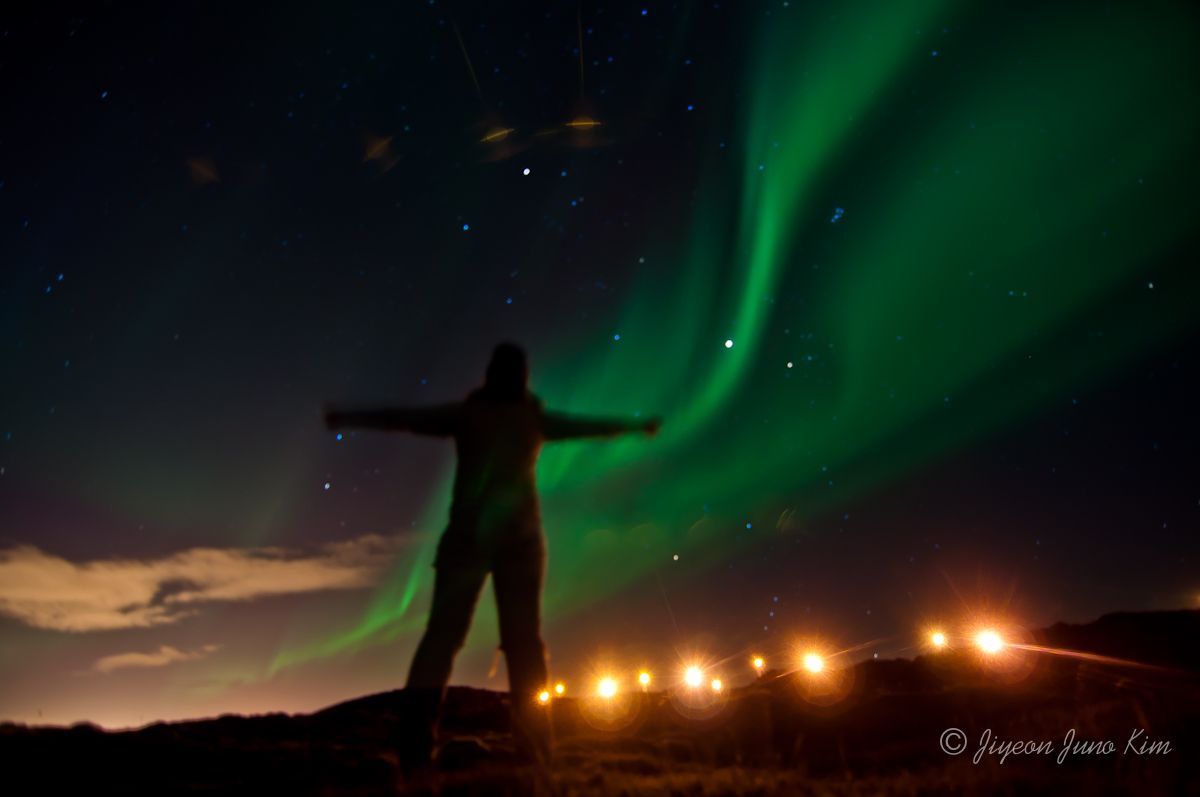 The Day I Saw the Aurora Borealis

There was a rumor around the hostel, “Tuesday will be the day for the northern lights!” I carefully watched the aurora forecast to see if that was true. I came to Iceland again, despite the cold weather, for two reasons: enjoying the hot pools and catching the northern lights. The latter one was the biggest dream for my entire life ever since I got to know what astronomy was. After I landed in Reykjavik on 10th, spent a few days without any big news but I patiently waited. I knew this was the closest chance I’ve ever gotten, but I didn’t want to be disappointed too big at the end. After all, we humans can’t fight the mother nature.

On Tuesday afternoon, we drove through rain and wind in southwest Iceland. The forecast said the northern lights would be active tonight but the weather wasn’t ideal. To catch the northern lights, three conditions have to be perfect: crispy and cold winter sky, clear and calm weather, and active solar wind. Solar wind was out there already, it was a cold winter night alright, but weather was the question.

At night, the sky was getting clear. We decided to drove a car outside of Reykjavik. Only a few minutes after, I saw a smudge in the sky. ‘Clouds?’ It was crossing the entire sky while dancing and moving around. It was definitely not a cloud, it was the northern lights! Among the bright city lights, the nature’s wonder didn’t quiet it down.

I sticked my head out to the window, screaming and wowing the whole time. We found a dark-enough spot to pull over. I ran out from the car, set my camera down on the ground (because I didn’t have a tripod) and fixed my eye to the most amazing nature show I’ve ever seen. I couldn’t believe.

When all of my friends decorated their bedroom wall with the poster of pop stars, my room was filled with photos of solar system, galaxies, deep space and aurora (northern lights). Yes, I was a nerdy kid. Catching the aurora was the biggest astronomical dream I’ve ever had ever since, and it finally happened this week. I watched the northern lights!

It was green and purple in the photos, but it actually looked like unnatural clouds. The movement was fascinating. The ones above our head were the most dramatic. Because we were looking at the vertical side of this magnetic field, it was thick and active. It felt like I was looking at a shower head when the water was on. The lights came and disappeared quite quickly. If we were at a darker place, we would’ve see much dramatic view but it was good enough for all of us. For one night, we saw the classic movement of the northern lights, at least for me. It looked just like the poster photos I had. Squirmy near the horizon, curtain shape, making shapes around the constellations… It was dreamy. Nature is wonderful. I may come back to Iceland every winter.