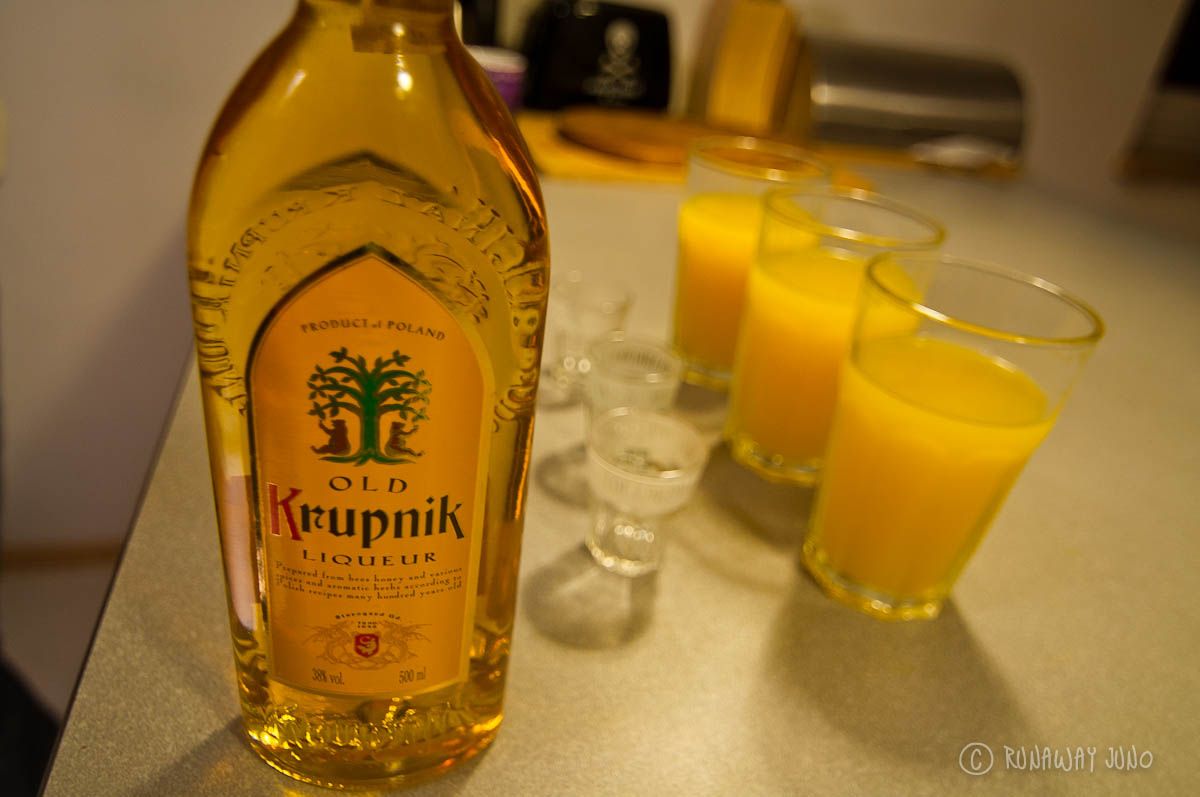 We cheer and empty the shot glass. Rich honey flavour is filled in my mouth. Slowly, I can feel the alcohol traveling down to my throat, and to stomach eventually.

“That was for the first leg. Na pierwszą nogę”

When you are drinking vodka, Polish would say ‘for the first leg’ with the first shot.

We talk, mostly about the variety of vodka in Poland and how much people like to drink. Pols are stronger than Swedish, according to Pawel.

We clear it down with a bit of orange juice.

Krupnik is the best kind of vodka in Poland, and is good for the stomach. Very sweet it is, so maybe.

It is proper to say “miodzioo-” after the sweet honey drink. It is equivalent with ‘Cool-‘ in English.

Pawel got a phone call. I forgot that it’s Saturday night. His old friends invited all of us to their house party in the neighbourhood. The biggest differences between Pols and Czechs is their drinking culture, according to Tomas, who’s living in Poland for 10 years now but from Czech Republic. Pols party in the house but Czechs love the pub. It’s the residue of Soviet occupation time, he said.

“We go after this. For the right leg again.”

Instead of cheers to the right leg again, you can cheer for your third leg if you are only with male party. “For the third leg: na trzecią nogę.”

Now we are heading to the party. Cold and damp night air feels pretty good after a strong liquor.

We got the biggest hug from a guy who’s wearing t-shirts saying “Rockstar”. So we call him Rockstar. Everyone is pretty drunk already. There’s empty vodka bottles laying around, and the grill is still working.

And I go “Kielbasa!” and everyone laughs.

Hannah fixed the drink for us; a shot glass and tall orange juice.

We drink and I start eating well-prepared kielbasa, fresh from the grill. Krupnok, blood sausage, is wrapped in a foil with onion.

The conversation flows from why Rockstar hates America, American politics, and everything turns into polish now. A car with a giant redbull can pulled over.

“It’s promotion only. I can’t sell so I brought here.”

Red bull is very popular in Poland, especially to drink with vodka.

We write down the new polish words we pick up. Everybody is laughing whenever we say something in Polish. Feels good to learn and speak another language, even for just few words.

I have no idea what time it is but I know I’m tired. I’ve been traveling for last few days, for last year in fact, but feel good to be welcomed.

Food is keep coming. Grilled Camembert blew my mind; I didn’t know we could do that.

After a piece of grilled port and Camembert, it’s time to go home. Rockstar and Hannah have been passed out for a while.

We walk fast through a chilled night. We hear noise from here and there. “Another house party” Pawel says.

I glanced at a clock; it’s almost 3am. I don’t even remember when’s the last time I stayed up this late, drinking.

This is just another typical Saturday night in Poland. Pawel, myself and Stephen