Empowering Asian Women – Thanks for AWE ’13 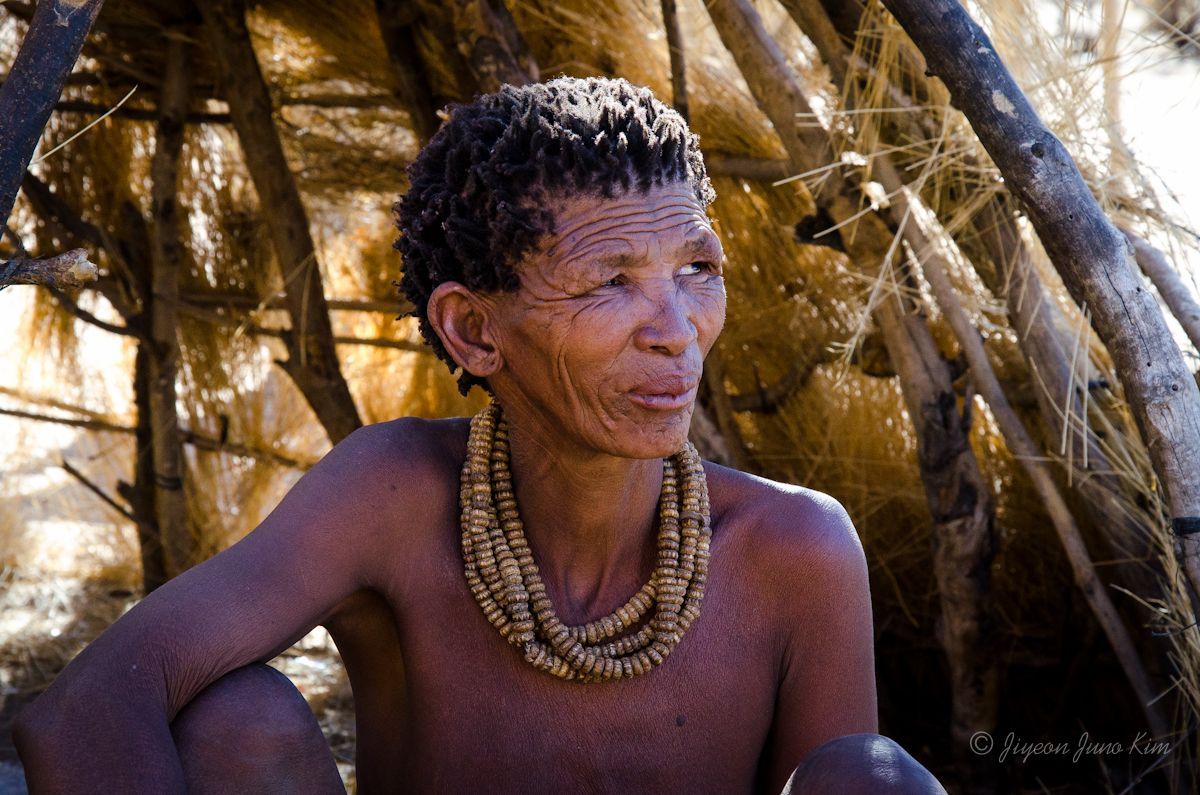 The humble life of the Bushmen

Around the corner of the big boulder field near the Erongo Mountains, there they were, making ostrich egg jewelry and hunting arrows. They lift their head up, quietly smiled, and showed interests to the strangely dressed visitors. There was no border that indicated their property, but it felt like we were intruding their safe ground, work place, and home. We were almost invisible to them, but somehow, I felt the warmest welcome. Women were wearing a few of ostrich egg jewelry, some were with babies. Their clothes, that were protecting only necessary areas, were made with animal skin.

I asked a few people if I could take photos of them. Some indigenous tribes are sensitive at cameras, and I wasn’t sure where they stand on the issue. I spent some time with a few elders and ladies. The genuine laughter from an old man who probably didn’t know what he looked like until looked at the camera LCD screen made me quite happy.

Then we went on a walk with Master Kutu, his son, and a young man who spoke fluent English. We hiked around the boulder field for a couple of hours, and he passed along some of the wisdom. It was a memorable experience that I didn’t expect. They were giving us a tour of their home.

The land looks dry and pretty much lifeless to me, but there were plenty of lives in between rocks, sands, and thorn bushes. Bushmen use trees as medicine, build small traps for small animals and go hunting for bigger animals like springboks and elands. They can make quivers and arrows with tree roots, and make a concoction of poison to put on the neck of arrows. They build a fire using two wood sticks and bird’s nest. We learned that this way of living has been continued for a long time by looking at the several thousand years old rock paintings of animals and hunters. It’s important to be a good hunter because it feeds the whole tribe, and good hunters get pretty wives. Master Kutu and his son Master Kutu was a great actor. He demonstrated how the small animals got caught in their traps, and also showed us the real act of hunting. We all enjoyed seeing the very much alive act, but hard to imagine they are hunting in real life only with hand made bow and arrows, animals much bigger than all of us.

We came back to our camp, humbled. The San people literally have to find something to eat from the ground, fight with live animals to survive, and live in the twig-weaved hut. In our standard, they are not doing well. Nonetheless, they were the happiest people I’ve ever met in a long time. I asked Master Kutu if he likes living in the desert (what a stupid question). He said they would all die if they didn’t. They came back because this is their home, and they are free here. Happiness is state of mind, I’ve realized it again.

We couldn’t communicate much (but many of them can speak fluent English), but they were enjoying our little group’s curiosity. A young girl dragged me into her group to let me take photos her family. They had such a genuine facial expressions. They looked straight into the lens, with 100% innocent eyes. They were not trained models, but the energy from their eyes was more powerful than ever. Beautiful Bushmen girl and her baby

Young mother and her babies

The treat didn’t end there. When we were resting our full stomach after the ‘Bushmen fondue’ with Oryx meat, we had a surprise visit from even bigger Bushmen tribe. They came by to sing and dance for us. It was beautiful. Under the bright southern Milky Way, the whole Bushmen family shared their part of the world with us strangers. The night continues with their marriage story. Turns out, Bushmen are great hunters, craftsmen, and storytellers.

‘We all came from here.’ The thought struck me. Bushmen (also known as San tribe) are one of fourteen known extant ancestral population clusters. Which means, all modern humans are a descendant of these people. This is where everything started for all of us. This simple scientific fact and their humble attitude toward life touched me deeply. They were beautiful inside and out. They are not trying hard to protect their tradition; they just truly believe that is the right way of living for them. In this era, when everyone trying to follow the trend, seeing the several-thousand-year-old tradition breathing by the oldest race on the planet Earth, there are some lessons we don’t have to speak out loud.

Our campground near the Erongo Mountains