Where in the World is Huaxteca? 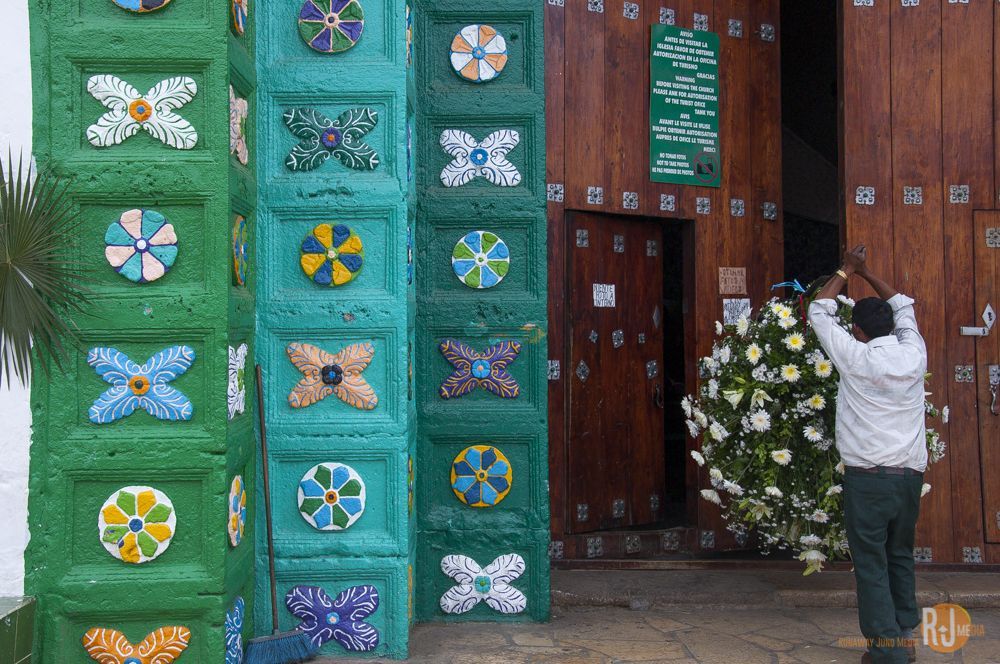 We walk in through the thick wooden door. The light is dim. There are no seats. Instead, the floor is carpeted with pine needles. Wide ribbons cross the ceiling of church. Men are stringing up a big ball of flowers in the center. Later, there will be a celebration,, we’ve been told. It’s a rectangular, the walls displaying figures of saints left and right. More statues stand at the alter, which is decorated with flowers. Thousands of candles burn at the altar in front of the figurine, and some on the ground. It gives the room a soft orange glow. It’s dark and I can’t see much at first but I can definitely feel the energy in this small, confined space. The air is thick with emotions. We see small groups of people siting on the pine needle. Some are cheerful, some are talking, but most of them are praying. They have created a small shrine in front of where they sit. Pine needles have been cleared, multiple rows of candles are lit, and stand burning and melting, men and women pray, holding tightly to live chickens. Others hold Coca cola and liquor bottles. The gathered crowd is dressed in the unique wool clothing of the Chamula region. Women’s thick wool skirts are uneven in the front and back, their blouses are decorated in beautiful patterns. Men wear the traditional sleeveless wool pullover.

I observe one group that is in the middle of prayers. A female shaman stares the figurine in front of her, prays over the multi-color candles. She lights more candles each time she stops. A grey-haired woman sits next to her. The shaman keeps checking her pulse and touching her with the chicken. She doesn’t look so well. The shaman plays a small flute onto the woman’s hand, head, and wrist. She prays, prays, prays, until the candles have burned down to nearly nothing. The old woman cries as the ceremony continues. Tears of pain, gratitude, or something else, I can’t tell. Finally, the shaman holds the chicken over the candles, and touches the old woman with chicken’s beak. She blows with her small flute onto chicken’s skull. She holds it out toward the sky, then toward the figurines, then over the candles, praying all the while, and then with a sudden snap the shaman breaks chicken’s neck. The sacrifice has been made.

This small Mayan church, Iglesia de San Juan Bautista, is a sacred place for the Tzotzil Maya people in Chamula. They come here to pray whenever they need. The ceremony we witnessed today was a part of healing ritual. It’s done for those who are ill, whether mentally or physically. We were grateful they let us stay to watch. The Chamula people are not visibly welcoming toward visitors, but we could feel that they didn’t mind sharing this special moment and we clung respectfully to the sidelines, watching in awe.

Typically, a shaman first diagnoses the patient by checking their purse. She heals through prayers to the Sun, which represents Jesus Christ. There’s no priest or bible, only people’s belief and trust. The pine needles on the floor represent Mother Earth. Before the Spanish colonial period, This ceremony used to take place outdoors..The pine needles also represent women and the moon. The prayers involve candles because they are the symbol of God. It marks the entire rite as a spiritual moment. The color of each candle represents a different force in nature: white is air, green is nature, blue is sky, yellow is sun, and red is fire. Depending on who you are praying for, the size of the candles will differ as well: small for children, medium for the middle-aged, and tall for the elderly. The size also shows the weight of your problems. The Coca Cola and liquor seemed out of place at first, but they are just as important. They believe evil spirits are kept away from the body by drinking Coca-Cola. And strong 60 proof liquor will keep the good spirits in. Iglesia de San Juan Bautista is a sanctuary for Tzotzil Maya people, a Catholic Church adopted into tribal traditions. They feel safe here, protected, and they believe in the power of nature and prayers. This healing ceremony continues every day, as long as it’s needed.

This short visit to Chamula impacted me hard, down to my core. It made me think about my parents, my grandmother who passed away five years ago, and how much we all have. Our health, families, and the opportunities, things that we take for granted. I admired the profound trust and belief the Chamula people had in their religion. As I watched the ceremony, a big ball of emotion gathered in my stomach. Empathy, respect, curiosity all at once. I felt closer to the earth. There are no words to describe what exactly it is they believe, but as long as they believe, it doesn’t matter. I don’t know their names, personalities, or their families, but I know I will remember their faces for a long time. I truly wish God gives them all the answers they prayed for.