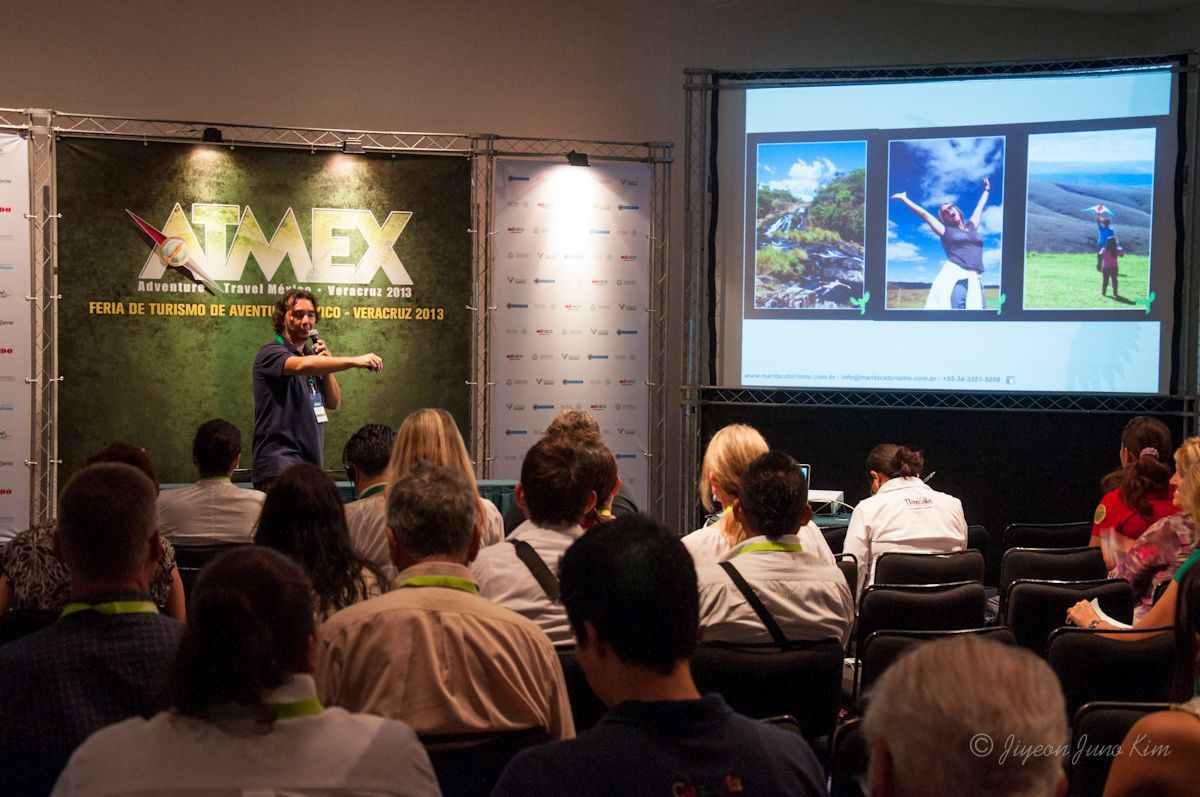 This August, Veracruz hosted the second annual Adventure Travel Mexico event for more than 500 attendees from around the world. I was invited to attend ATMEX 2013,This four-day event was followed by various FAM trips around the country, and was filled with inspiring sessions and networking with passionate travelers.

ATMEX 2013 clearly delivered the message: Mexico is a great place for adventure travel. Starting from Veracruz, the host state, other Mexican destinations brought their best game to the trade show. Because of its rich and diverse environment, there are plenty of activities for everyone to enjoy in Mexico, from soft to hardcore adventure. As our Veracruz tour guide, Mexico, (his name is Mexico) said, he could bring us to any place for any kind of outdoor activity we wanted: kayaking, rappelling, rafting, mountain biking, sand boarding, zip lining… you name it, it’s there.

Another focus of ATMEX was reminding us the importance and necessity of sustainable travel. While we are using nature to build our businesses, we should always remember that protecting the environment is one of the most important responsibilities we have.

I came to ATMEX without knowing much about the country. Certainly, I didn’t think of it as a key destination for avid adventure travlers; however, my perceptions have changed after a week of adventures in Veracruz. Surely I did learn a lot, and now I have much greater understanding about Mexico.

Keith Sproule, the Tourism Business Advisor with WWF in Namibia, made an impressive keynote speech on Namibia. It was one of the highlights of ATMEX 2013. It stirred up excited among people who are already going. Namibia represents a tremendous wildlife restoration project—perhaps one of the greatest stories yet, as the WWF said. There are still problems to solve, but the protected region is expanding. Moreover, Namibia’s great success is affecting nearby countries.

ATTA’s next world summit is going to be held in Namibia. I met a number of people who booked their tickets to the summit after the speech. I’ve heard the programs are going to be amazing, and I can’t wait to hear how the summit goes in October. ATV on the sand dunes of Chachalacas

I loved the energy in the room. Among the several travel/ media gatherings, but I have to say, this ATTA event offered the most pleasant networking for me. Unlike other functions, networking didn’t feel like a duty or a burden. There were people from various different professions and field, and most of them offered a piece of knowledge. Everyone I met was truly inspiring, passionate, and just awesome. I can hardly wait to meet all of these individuals again at the next ATTA event. Maybe people are pleasant and energetic because they are active, and always out in the sun?

The booths in the market place were well set up to navigate easy. It was well mixed with tourism boards and independent companies. There was a good mix of cultural, and destination displays. Some of the booths had quite a presentation with adventure gear and decorations. Mexico City brought their city tour bus, Chiapas set up an inflated dome for the slide show, and one of the Veracruz adventure tour companies brought every kind of adventure gear you could think of. People said this was the ‘Mexican way’. I can’t tell if that’s true since I’m not so familiar with what’s the norm. However, I can tell that what was printed wasn’t really important here. Most of the schedules including meals, ceremonies, and sessions didn’t start at the intended time. Dream catchers at the market place

Even though I enjoyed my FAM trip to Chiapas, I still think they should’ve canceled it when they knew there were less than 3 people registered. Myself and Julia, a tour agent from Veracruz, were only ones on the trip. Because none of the members on the tour spoke English, including the person who was assisting the trip from Chiapa’s OCV, I couldn’t get much information out from the three day trip. A third of programs on the itinerary didn’t happened, and I never understood why. Perhaps it was my fault for, not to speaking Spanish, but I expected someone from the official tourism board would help me to understand their state better. Learning how to rappel at Finca Argovia

I understand ATMEX 2013 was a big event, with hundreds of attendees and dozens of staff, but I think the communication between each team was a lot worse than I was expected. Arranging flight ticket continued until four days previous to departure, hotel information got lost in the middle, the check out date was one day earlier than my flight, and they told me to figure it out myself. It all worked out at the end, but it was definitely unnecessary stress. However we had a great support team (Aaron, thank you) who responded quite quickly during the conference.

Over all, I think ATMEX 2013 was a great success. Can’t wait to see what will they bring next year.

Leave a Reply to Runaway Photo: At the Edge of the Pacific Ocean in Chiapas, Mexico Cancel reply