Food you should try in Malaysia. We can’t discuss Korea without mentioning food. Every season Korean make different dishes using seasonal ingredients. We make kimchi in winter and eat it all year. A common greeting is “Have you eaten?”. Yes, food is very important in Korea.

There’s no shortage of great restaurants in Korea. Where to start? Let’s start simple: street food.

#I put a dash between each syllable, so you know how to pronounce it properly.

What is it?: rice cake cooked with gochujang
Are you ready for some spicy food? Meet the most popular street food of all time, tteokbokki. It literally means ’stir-fried rice cake’. It’s a rice cake dish cooked with gochujang, fermented chili pepper sauce. It’s sweetened with corn syrup or brown sugar. You’d never have guessed spice and sweet go so well together. It was the most popular after-school snacks when I was growing up. We all gathered in front of tteokbokki stall before heading home. In the same stall, usually umuk (boiled fish cake), twigim (deep fried, well, everything), and sundae (noodles in pig’s intestine) are sold together. It seems like an unlikely combo, but trust me and try it. These two foods sell any season of the year, but hot umuk soup and tteokbokki taste the best in cold winter days.

What is it?: cow or pig’s intestines that are stuffed with various ingredients
It doesn’t sound so appetizing based on the ingredient list, but it’s one of the comfort food for Koreans. It’s usually made with starch noodles (dangmyeon), barley, pork blood, and a variety of vegetables. The recipe can be vary based on the region. It’s often served with pig’s lung and liver. 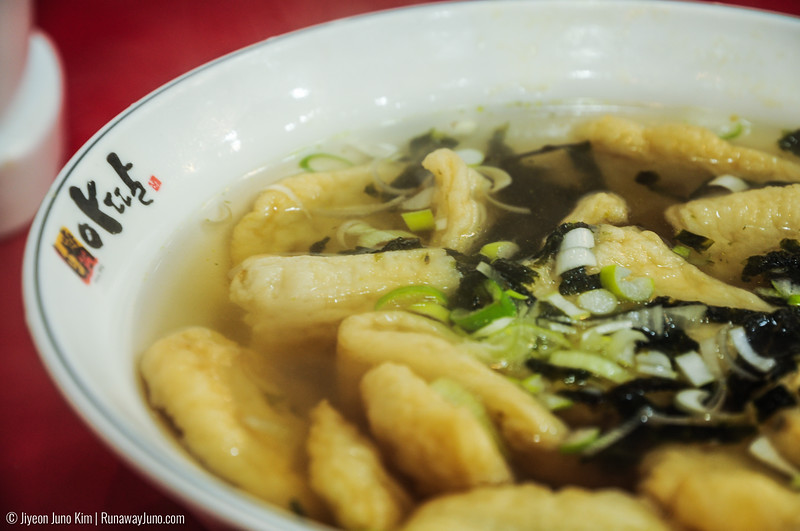 What is it?: variety of deep fried stuff
Twigim is a generic term of battered and deep fried food. The common ingredients are vegetables, mandoo, small gimbab, egg, sweet potatoes, squid, and more. With tteokbokki and sundae, twigim is the key member of Korean street food trifecta. Twigim is cut and served with tteokbokki.

What is it?: dumpling
Korean style dumpling made with meat and vegetables, we call it mandoo. Flat dough wraps around the ingredients. It’s usually steamed but you can also find pan-fried. It’s commonly made at home during the Lunar New Year celebration. I’ve been making them with my mom ever since I could remember. Many cultures around the world have some sort of mandoo in their culture, as this is the international definition of a comfort food.

What is it?: Korean donut, but flat
Pan-fried (with a lot of oil) dough filled with sugar and nuts, it’s the most popular winter street food. I loved watching how it was made when I was a kid. A small ball of dough with filling goes on the pan and it’s pressed with round spatula. Such a simple yet fascinating procedure. It’s our version of a donut, I guess. Everything deep fried is hard to resist, especially hoteok. There’s just something special about hot and chewy rice cake mixed with brown sugar and nuts. Some vendors make it ‘healthier’ by making the dough with a bit of green tea. Nice try.

What is it?: fish shaped waffle
The name says it al: it’s mashed red bean filled bread that looks like fish. Bungeo is a name of a freshwater fish in Korean. In winter days, I ran down to the vendor and watch how he made them, and ran back home to eat them fresh. It’s best served hot and crispy. It’s like a small waffle maker, but shaped like fish. You can imagine how the process boosted a little girl’s imagination.

What is it?: grilled chicken on a stick
Why is everything taste so good on a stick? Dakkochi is barbecued chicken on a stick with sweet and spicy sauce. It’s similar with Malaysian (or Indonesian) satay but it’s a lot bigger and sauce is quite different. Many cultures in the world enjoy this ‘meat on a stick’ cuisine, I see.

What is it?: sweet taffy
Be careful if you have some dental work done. Yeot might pull it out. It’s Korean taffy (lack of a better word) made with rice, variety or other grains, nuts, ginger, or pumpkin. In the old days, yeot sellers travel around town like a troubadour singing about yeot. They made a great sound with scissors and chisel which they use to break yeot. Yeot and the sellers are part of Korea’s folk culture. It’s not sold that commonly anymore, but you can still find them in traditional streets like Insadong. 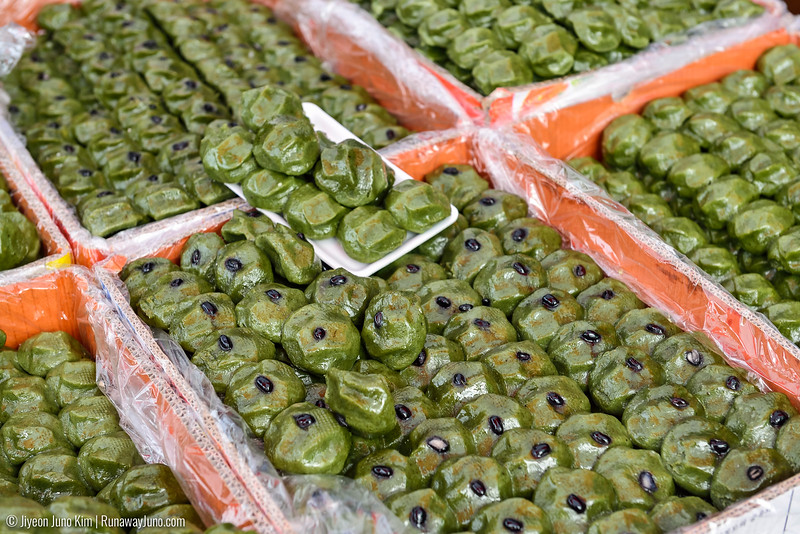 What is it?: rice cake
Ddeok comes in various shapes, sizes, and ingredients. It’s a generic term to call anything that’s made with sticky rice. Common fillings are: green beans, red beans, pumpkins, and varity of beans. The dough is made with sticky rice and mugwort is often used to make green color.

What is it?: rice and ingredients rolled in seaweed
The literal translation of the word gimbap is “seaweed rice”. These two things are the most basic components of gimbap and recipe can be vary. It’s one of the most significant street food or snack in Korean culture. Some of the basic ingredients are steamed white rice, carrots, picked radish, egg, ham, and sesame oil. Some serve it with tuna fish, kimchi, meat, sesame leaves, and more.