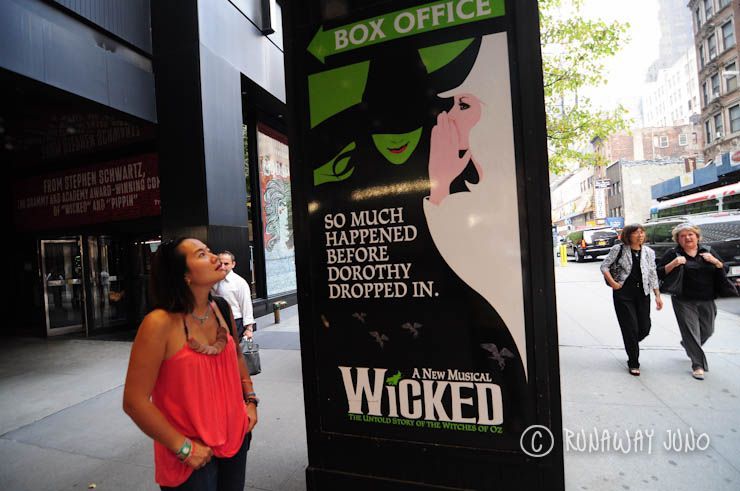 We all know that I’m a musical geek. If you didn’t, now you do – yes I am. I often enjoy listen to the whole sound track from top to bottom and picture the scene. The musical made me feel alive, and all the songs tell stories and show the picture. It’s like reading the book with a 3D glasses.

The Musical Wicked, one of the most successful musicals of the history, is a very important piece for me. I’ve never seen it on the actual stage, but I know every line through and through. The song ‘Defying gravity’, is the song that I consider my theme song. I project myself to the character and it gives me the energy. And Idina Menzel and Kristin Chenoweth became two of my favorite musical performers. Ergo, my ‘theme song’.

When I was going through a hard time in the grad school, I printed out the lyrics and put that up on my desk. I think that was the first time that I ‘truly’ understood the symbolic meaning of ‘defying gravity’. I still had a very limited English skill at that time. In fact – and I admit this is little too geeky even for me – these lyrics are on the front page of my Master’s Thesis book. For your information, my major is mechanical engineering. I know, it does not go well with the rest of the book but it meant so much to me. Something has changed within me

Something is not the same

Too late for second-guessing

Too late to go back to sleep

It’s time to trust my instincts. Close my eyes: and leap!

And you can’t pull me down.

Well, if that’s love it comes at much too high a cost!

As someone told me lately: “Ev’ryone deserves the chance to fly!” I believe most of the people feel they are not popular. At school, at work place, when you travel, even with this cool travel bloggers’ society, we are never the ‘cool gang’. We never fit in. Elphaba does clearly not belong to any normal group. The green skinned witch who has a gentle and brave heart couldn’t be accepted by anyone because of her skin color. She was just different.

For me, growing up in such a convectional society made me feel like I was weird. I was always the one who was into the world outside of the home. Going through the schools and the cubic farm, I thought about Elphaba and this song quite a lot. I was the one with the green skin. I was different.

Something did change in me, since some time ago. I realized I could really do things to make my life happier and I did. I was tired of accepting limits that weren’t mine, I was through with playing by the rules of someone else’s game and there was no step back for me. Only to leap, and I did. It was my chance to fly.

It was lonely and it is – that living differently than what most of the people from my home country. I’m a failure and embarrassment to my family. I studied hard, have a food value in life, healthy attitude but none of it matters. Still, I’m living as what I planned but it doesn’t mean that I don’t think about the negative energy from back home. It’s lonely. That’s why I liked this line so much “As someone told me lately, ‘Everyone deserves the chance to fly’. And if I’m flying solo at least I’m flying free.” Yes, I’m flying solo but I’m flying free and anybody can’t pull me down.

In the end, I don’t think anyone wants me to live a life that I don’t want. What for? They, people who pity me, are sad because I don’t want the same lifestyle what everyone does, or at least they pretend to do. Still, they want to blame someone else than themselves and believe that I’m influenced by ‘free spirited people’ out in the world but none of that is true. They just don’t want to accept the fact people can be different.

So yes, I’m still listening to Defying gravity and looking for the energy to power through.