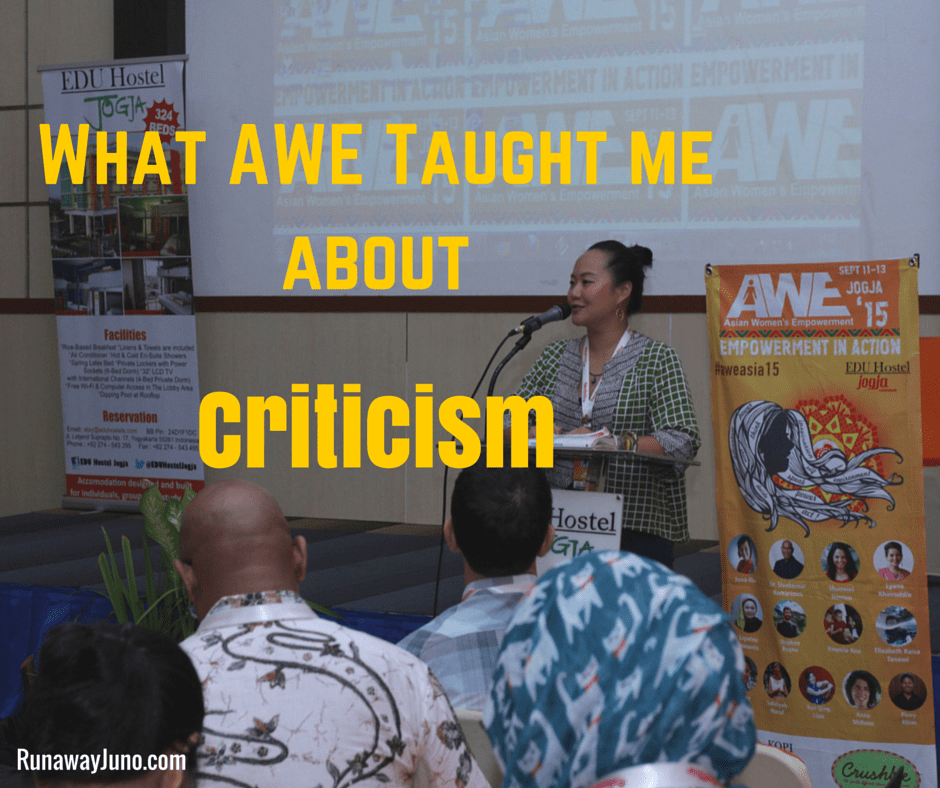 How to take criticism without taking it personally.

This year’s Asian Women’s Empowerment Conference was a huge success. It was the true definition of quality over quantity. It was the smallest group among the three events we had, but the energy was the greatest. You know you can fill the dark room with a single candlelight; the feeling was something like that.

I’m no where near where I want to be with AWE, but it’s a process. For the first time, it felt like I was moving forward for something good and hopeful. I have to thank everyone who supported the mission, and who were kind enough to send me their honest opinion. I always ask everyone to send me a feedback to make a better event next year. We Asians are not really good at confrontation. It was a good practice for me and for people who wrote. After years of cycle, I’ve learned some valuable lessons about criticism. Here they are.

First year. When it first happened, it hurt like the words were gutting through my heart. I couldn’t handle to see my brainchild AWE was being trashed. I was so shocked to read those words that I was starting to doubt my intentions. ‘Am I a bad person?’ I’m sure I made some technical mistakes because it was my first time and I’m not a professional event organizer. But the feedback was mostly focused on me as a person, not as a professional. Later I figured out that it was based on personal problem and the person’s insecurity. It was complaints not constructive criticism. Sometimes we can’t differentiate constructive criticism and pure complaints. It hurts nonetheless. But it’s important to put ice-cool thinking cap and see what’s what. Constructive criticism can hurt, yes, but it’s worth listening and thinking. Complaints? Not really.

When it first happened, I couldn’t think of something else for days, weeks, and months. How silly of me. But the thing was, there was more than 70 people who were involved in the event, there was only one bad feedback. That’s a pretty good ratio. I was so fixated on the bad thing, I couldn’t see the good out there. If you worked hard, true to your intentions, and had right audience, I’m sure things are better than it seems. When you think things are bad, just look around and see all the good you have.

Social study revealed that there will be always same percentage of certain type people in any size of groups. I’m sure you had an experience. When you run a project, there’s always someone who’s not participating and nay-sayer. You’d think it would all go well if you replace with that with someone better, right? But, no. Average speaking, someone will fill in that spot, no matter how big the group is.

That’s why AWE is such an extraordinary group, because we have very low number of ‘certain type of people’. Nonetheless, there’s always someone who’s not pleased, and always will be. If you have a vision and goals to achieve, it’s important to realize that making everyone happy isn’t your job. You know what people say, if people are starting to say bad things about you, you finally made it. Don’t focus on unhappiness of someone. Really, people tend to start complaining when they feel insecure. That’s their problem, not yours.

You can’t save everyone

No matter how the good of intention you have, some people would say ‘No’. It’s not because they don’t want to be saved, but they just have different priorities in life. And that’s okay. If they are happy where they are, that’s good. Don’t get discouraged by people who you can’t attract. Remember? Making everyone happy isn’t your life’s goal.

Learn from the mistake

Complaint or criticism, there are always things to learn about your vision, project, or human mind. Thanks to all the difficulties I had over the years, now I have much better understanding about people. Thanks to all the feedback (both good and bad), I’m making a better community for people I care and become a stronger-self. Even if it was a complaint, they cared enough to write all the comment. It’s much better than silence, which we Asian are good at. Cat Stevens said “First Cut Is The Deepest”. The first criticism will hurt like nobody’s business, but it eventually will help you grow.

I’m ready to move onto the next step. I thank you in advance for your support and constructive criticism.