How to Enjoy Your Caribbean Holiday Alone 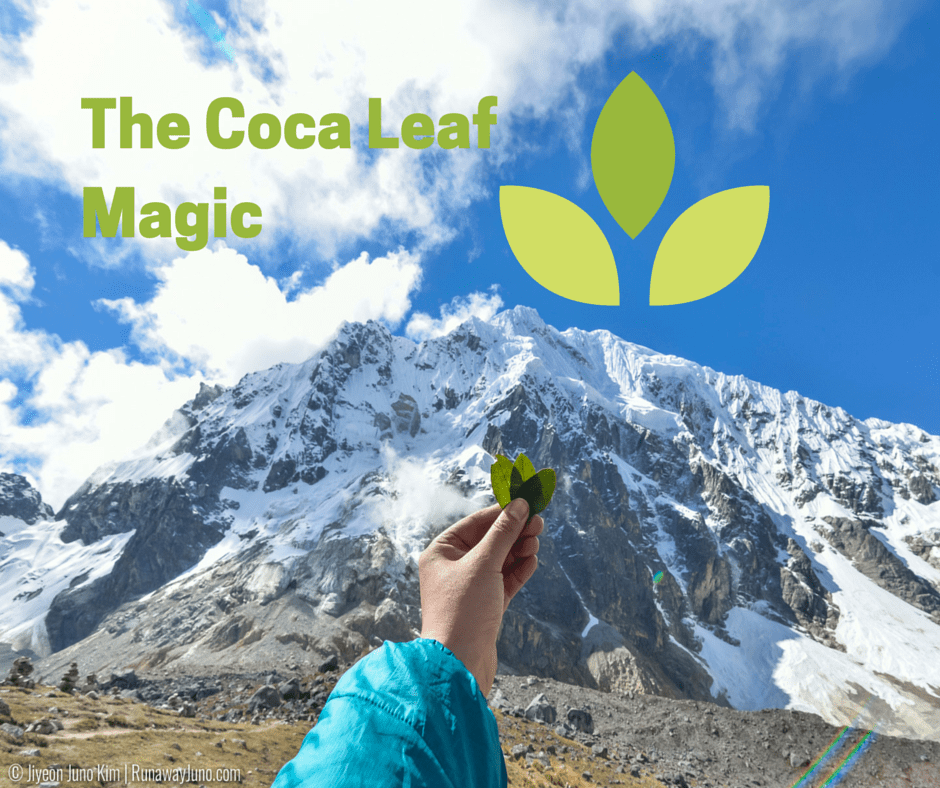 As the elevation gets higher near the Andes, a small bag of green leaves becomes your most important item. It’s your survival kit. Chew seven leaves. It’s a strange sensation, a handful of dry leaves in your mouth. After 15 minutes? Difficulty breathing, fatigue, and potential headaches are all gone. At the beginning of our Salkantay Trek, we were advised to buy two bags of coca leaves for five days of trekking. This is the coca magic.

When I thought I was choking from the air in Colca Canyon (elevation 3,650m), our guide Nestor gave me a handful of coca leaves and a bit of stevia. My tongue and cheek became numb. Like magic, I could breathe again. When we were up in Lake Titicaca (elevation 3,812m), coca products could be found everywhere: coca granola bars, coca candy, coca tea, chocolate covered coca leaves, and so on. I thought this was just one of those ancient medicines that are commonly used in the Andes to beat altitude sickness. Then I got curious, and asked, “What is this, really?” In a small boat on Lake Titicaca, I looked through the Peru guidebook (that’s how we used to research pre-internet. Remember?) Turns out, coca leaves are the main ingredient for cocaine, and there’s Coca-Cola, whose name came from… You guessed it. What? Why didn’t I get the memo? Chewing coca leaves on Salkantay Trek. Couldn’t have done without it!

In the Andes, coca is used as a stimulant to overcome fatigue, hunger, and thirst, and especially against altitude sickness. Not just that, it also is used as an anesthetic, even for treating broken bones, childbirth, and operations. In the new world, since the 19th century, the coca leaf has been used to produce cocaine, a powerful stimulant extracted chemically from large quantities of coca leaves. Up until 1929, the Coca-Cola company used to put cocaine in their beverages. If you don’t want to get searched by a canine unit at the airport, you’d better empty your pockets of coca leaves before you come home.

The drug part aside, coca leaf plays a big role in culture and religion throughout Peru and other countries in the Andes. Traces of coca have been found in mummies dating 3,000 years back. Extensive archaeological evidence for the chewing of coca leaves was found during the Inca period.

When we reached the highest point of our Salkantay Trek (Salkantay Pass, elevation 4,850m), we thanked Apu Salkantay and Pachamama with three coca leaves. Holding three coca leaves and a flat rock from the valley up high, we said, “Sulpayki Apu Salkantay, sulpayki Pachamama, sulpayki Ayqui” – thanks to Salkantay mountain, thanks to Mother Earth, and thanks to the valley for taking care of us. You’ll see three coca leaves on many signs, statues, and figurines. Coca is also part of social rituals. In the mountains, trekkers and chaskies hand coca leaves out to wish for successful trekking. In Taquile island in Lake Titicaca, two people exchange a handful of coca leaves before saying hello. Only after leaves are in the mouth, will they start their conversation. When our group was tired and felt sick from the altitude, we all chewed coca leaves together. It was like an Andes’ style pat on the back. I didn’t feel stimulated by coca leaves or coca tea. Maybe because I didn’t use it with stevia. But when I was walking on Salkantay Trek, I chewed coca leaves one after another, especially during the uphill climbing. It was a part ritual, part belief, and part desperation. It’s the closest thing to drugs I’ve ever done, and I am honored to have been a part of the Andean tradition. I think I’ll miss it.